Howe Dell: Too cool for school? 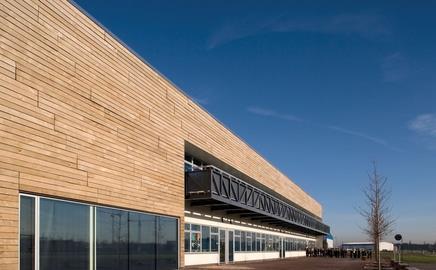 Healthcare and education The Howe Dell school and children’s centre project was commissioned by Hertfordshire council in order to test the latest eco-friendly systems, and as Chloë Stothart discovers, its most intriguing feature is its temperature control

There could not have been a bigger contrast between two buildings. The original Howe Dell school was a wattle and daub building which had stood through the reign of every monarch since Henry VIII. It could barely contain the primary school pupils stuffed into it and the roof of one classroom actually collapsed.

In its place came a state-of-the-art building on the other side of town, bursting with eco-friendly technology. The new Howe Dell school and children’s centre is a demonstration project commissioned by Hertfordshire council to test eco-friendly systems that could be adopted in other schools in future. Most councils aim for a percentage of renewable energy in their new-build schools, but Hertfordshire has gone a step further by trying to create a zero-carbon building. It brings together some familiar technologies like solar panels, photovoltaics, a green roof and worktops made from recycled yoghurt pots, but its main claim to fame is that it’s the first building in the country to make use of a new, green way of heating and cooling called interseasonal heat transfer (IHT).

IHT makes use of an energy capture system which is sitting unused in every school in the land: its playground. As sun beats down on the tarmac, heat is captured by pipes filled with water and anti-freeze buried beneath it, called “the collector”. As the water warms, it is pumped into the thermal bank, another network of pipes below the school. Here, the heat is absorbed into the ground below the building – damp soils, like clay or wet sand, are best – where it stays, thanks to the highly insulated foundations of modern buildings which stop heat escaping upwards, and the tendency for heat to move slowly through soil.

When heat is needed, water is pumped through the pipes in the thermal bank to a heat exchanger feeding the underfloor heating and to an air-handling unit where it can be used to heat the ventilation air. In another twist to the low-energy design, the warm air is ducted through the school using a TermoDeck system. This comprises hollow concrete floor slabs, which have a high thermal mass, through which warm or cool air travels around the building.

In summer, a similar process keeps the school cool. On cold days, the water in the system is cooled by frost on the playground surface and this is stored in a lower temperature separate thermal bank. A control system compares the difference in temperature between the thermal bank and the playground surface to determine if the water in the collector system should be diverted to the heat or cold store.

IHT is well suited to reasonably large buildings like schools or developments of several homes. Single-home developments do not have the necessary economies of scale to make IHT an affordable option.

If you have an IHT, you can collect heat from the panels and store it underground – which improves the IHT and means the panels don’t overheat and become damaged

While ground-source heat pumps are cheaper to buy, IHT costs less to run. As water is brought to a higher temperature by the heat from the tarmac compared with a ground source heat pump – about 25ºC rather than 10ºC – less energy is needed to bring it up to the temperature needed to warm the classrooms. Another advantage is that it is possible to store heat with IHT.

The IHT also fits in neatly with some of the other green technologies in the building. As well as working with the TermoDeck, it can help keep the school’s solar thermal collector panels working properly. “If no heat is drawn off the panels in the summer holidays there is a danger of overheating,” says Thompson. “If you have IHT, you can collect heat from the panels and store it underground.”

Co-ordinating so many green technologies in one building required careful planning. Contractors had to work closely together because the heating and cooling systems went in with the foundations of the building rather than later on as is conventional, says Clare Devine, head of the education division of Capita Architecture. Drainage and IHT pipework had to be co-ordinated below ground so the heat and cold stores did not interfere with each other, says her colleague Bob Edgar, an associate.

The IHT was funded by a £250,000 grant from the Carbon Trust, which also paid for a year’s evaluation of the system. Thompson says this sum is far more than IHT would normally cost because of the monitoring and because the firm has now learned how to create the system more cheaply. He estimates that somewhere like Howe Dell IHT would normally cost about £75,000. The building cost £2,400/m2, excluding basic utilities, inspection for decontamination and the cost incurred when the original contractors went bust. There is not yet any performance data.

The school is now ironing out the wrinkles in the system. It has experienced a rapid growth in popularity, which means the heating system needs tuning. “Each child is a heat source so to work out how much heat is emitted in classrooms, you have to know how many children there are,” says Debra Massey, the school’s headteacher. “At the time I had 150 on the roll and now I have 279; I could not have predicted that growth.” The extra bodies have meant the heating is a little too high, so doors were left open to cool it until it could be turned down.

But that hiccup aside, the eco-school has taken off. The building itself has become the ultimate teaching tool. The school’s eco-curriculum, rated outstanding by schools inspectorate Ofsted, uses the technologies as a basis for learning.

“They can see how many kilojoules are pumped out by the wind turbine and how that relates to what a kettle or a toaster uses. There is plenty of maths and exploration in there,” explains Massey. Eventually a display will tell children and visitors how much energy the building uses and how much it is pumping into the National Grid. “The philosophy is that it is a zero-carbon emission building and one from which future generations will learn,” she says.