I know why the caged bird sings … 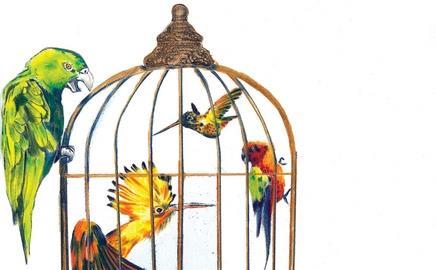 … it’s because his cage is made from gold and he’s just negotiated an excellent healthcare package. Eleanor Harding analyses this year’s Hays Executive salary guide to find out how companies are trapping their top executives

Forget golden handcuffs, this is the age of golden prison complexes complete with diamond-encrusted bars and platinum-reinforced doors. Construction companies will stop at very little to keep their top staff from escaping. Even if the offer of more money and bigger benefits initially fails to weaken an executive’s resolve, ever-increasing notice periods mean there is usually plenty of time to work on a counter-offer to get them back.

“We’re seeing more counter-offers than ever before,” says Phil Laycock, a director at Hays Executive, whose annual executive salary guide is shown overleaf. “And for notice periods, three months is the new one month.”

One case he dealt with concerned an individual who resigned to join a company that suddenly went into merger talks. “His employers went to great lengths to buy him back,” says Laycock. “He was on three months’ notice, and so that’s the time they had to find a reason to get him to stay. They made about three or four counter-offers in terms of jobs, money and status. It ended up being a protracted negotiation over four or five months. They offered him new roles in the organisation to give him something more attractive than the uncertainty he was going into. And they got him in the end.”

Blimey. One of the most popular gambits is to bulk up both senior and junior directors’ salaries with stock options – with a catch. At Balfour Beatty, for example, senior staff only reap the rewards of their annual bonus in shares after three years.

“The scheme has a retentive element,” says Paul Raby, HR director, “but it’s also to align the interests of senior staff with those of the shareholders.”

Mott MacDonald also offers employees shares they can build up over time, says Tania Heap, UK HR director. “If you have been with Mott for a few years, you build up that share ownership, and that’s a good reason for you to stay. We don’t think there’s anything wrong with being an employer for life.”

Sometimes it’s not even about the money, adds Heap. She was once approached by a senior director who had been offered a huge sum elsewhere. “He didn’t want us to match the package,” she says, “but he wanted a bit of career direction; he wanted to know where we saw him in the next five years. We offered him a package, and he accepted it.”

He was on three months’ notice, and so that’s the time they had to find a reason to get him back…

For senior staff who are already earning a good wage, cash incentives aren’t everything. Eddie Molnar, managing director of Hills Electrical & Mechanical, is one of those employers that aim to retain staff by offering a better quality of life. He says: “It’s about company culture, workplace environment and social activities as well as the normal incentives. People have to want to work for you, and with the younger generation, quality of life is often more important than how much they are being paid.”

Vaughan Burnand, managing director of Shepherd Construction, agrees. “Senior people will not go if they are clear about the development they’re in and how it can satisfy their aspirations,” he says. “My executives are as solid as a rock, and they don’t accept offers from headhunters.” (Note to any particularly competitive headhunters out there: that sounds like a challenge to us.)

But back to the cash. Also on the rise are pensions and the more sobering incentive of death-in-service payments, according to Hays Executive. Pensions continue to move from final salary to less generous money purchase, but there are several with double-digit percentage employer contributions. Death in service can now be as much as eight times a person’s salary, meaning that they never have to think about life insurance again – as long as they stick with the company.

If you’re looking to increase your salary or benefits, it’s clearly a good time to negotiate. Molnar predicts that staff shortages won’t ease off for at least three to five years – but when it does, the ball will be in the court of the companies again.

Burnand agrees: “The industry’s booming now, but loyalty is recognised and remembered. The ones who stay loyal to us are the ones who we’ll want working for us when there’s a slump in the market.”

And finally, Laycock has a cautionary tale for anyone wanting to play hardball. He remembers an individual who played two companies off against each other to try to get the best package. “They knew he was trying to play them against each other. He found himself in a situation where the company who had made him the offer was so unimpressed by the way that he was trying to play it that they withdrew the offer, at which point the individual found himself in a rather awkward situation. In the end, he was out of work. You play that game at your peril.”