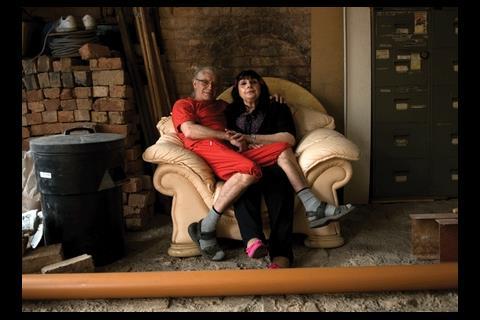 The man sitting on the chair is George, and he has been rebuilding his house for 15 years. He also wants to redesign his body, by way of a sex change. All was going well, then there was a knock on the door... 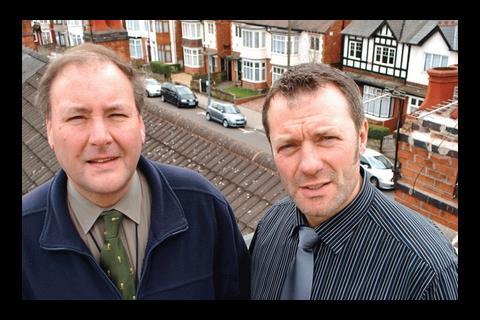 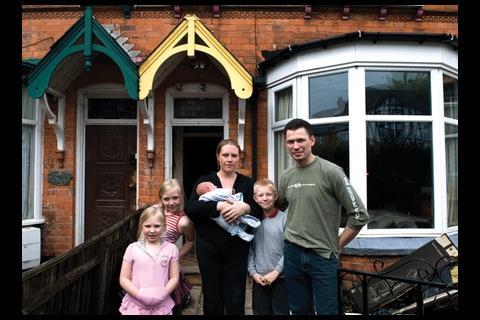 The Valentine family, who were told that “a child with a DIY manual” could have made a better job of their roof

Forget Britain’s Got Talent, last week a Channel 4 documentary finally gave the unsung world of building control its moment in the limelight. Emily Wright finds out what the inspectors involved, and the rest of the industry, thought of it...

Stakeouts, anonymous tip-offs and trawling inner-city streets for dodgy goings-on – all par for the course for Birmingham council’s building inspectors, apparently. Okay, it’s not exactly CSI but a Cutting Edge programme last week set out to show that these inspectors are the crime fighters of the construction world, prepared to save the day, one extension at a time.

The Building Inspector Is Coming followed Mark “they call me the Sheriff” Harding, Karl Baker, Sanjay Patel and Dave Sankey from job to job to demonstrate that these guys are not out to make people’s lives difficult but to round up cowboy builders and make sure homeowners are not breaking the law – wittingly or otherwise. Working on the premise that, as the recession deepens, more people are improving and renovating their homes rather than moving, the programme emphasised the need for homeowners to be aware of the Building Regulations, and what will happen if they don’t comply with them.

As the stern-voiced narrator explained: “Although the nation of home improvers may not know it, every change they make has to please someone other than themselves: the building inspector.”

As well as evidence of the inspectors leaving “no unregulated stone unturned”, viewers were also treated to a glimpse into the lives of some of Birmingham’s most colourful residents, such as George, the pre-op transsexual who has been working on rebuilding his home – without approval – for more than a decade, and was forced to spend all the savings he had put aside for his operation to have his bungled roof redone.

But did the programme succeed in changing people’s opinions on the building control sector? Building gathered some feedback from the industry to find out. But first it caught up with one of the stars of the show …

Karl Baker, 43, one of the show’s building inspectors

So what did you think of the programme?

I was a bit nervous as I sat down to watch it, as you just hope you don’t come across looking silly. The music and editing was funny – it made it feel a bit like Jaws, didn’t it? My son, who’s eight, loved seeing his dad on the telly. I’m not sure it has inspired him to go into the business though.

Do you think it showed you in a good light?

I’d say that it challenged people’s perceptions. It proved we’re not terrible. It’s mainly just bad builders, the real cowboys, who hate us.

Do you never get any hostility from decent builders and construction firms?

Sometimes we do. Even the good ones can get frustrated with us. I can understand why, as we have to tell them to do and redo things so they are in line with regulations. I try to explain why they have to build a foundation to double depth because there is a tree nearby for example, rather than order them about. Another trick is that I let them have a little moan and a rant about it – that makes them feel better.

Do you think the people who watched the programme who had no idea what your job entailed would have learned anything new?

I think it has shown the public what we have to deal with and that we are here to help them, not make their lives difficult. People shouldn’t fear us; they should fear those cowboy builders. Though I do want to say that not all of them are bad and I get on with most of the construction guys on my patch really well. Channel 4 edited out a lot of the technical stuff we talked about. I think that would have taught people even more and really shown the reasoning behind what we do, but they have to cut something, I suppose. And maybe they felt people would switch off if there was too much technical talk.

Some of the residents were real characters.

I know – Mark was dealing with George, wasn’t he? When we knock on that door, we don’t know who’s going to answer. Sometimes people can scream and shout, sometimes they are drunk and sometimes it’s a George!

What do you think was the main message of the programme?

That we do what we do because it’s the law, not to make people’s lives difficult for the fun of it.

Are you getting recognised now?

Yes, my phone hasn’t stopped ringing all day and a lady came running out of a coffee shop this morning shouting that she had seen me last night.

Missed the programme? Here are some of the best quotes...

Beware of the builder that says he can start tomorrow.
Mark Harding, building inspector

The Romans had builders building houses. Any one that collapsed, they’d kill the builder! Nowadays we’re not so severe.
Sanjay Patel, building inspector

He didn’t like the house how it was and wanted to do it to his own design. He’s been doing it for about 15 years and it’s still in a state … he gets the bricks off the skips and washes and scrubs them so they look like new. Anyone who does that, the house is never going to be finished.
Marlene Galvin, George’s wife

My kudos is rising, my mojo is flowing (on discovering a new extension without building regs).
Dave Sankey, building inspector

I called a roofing contractor to come and have a look at what the builder had done to my roof and they said a child with a DIY manual could have done a better job.
Lisa Valentine, resident

If there was no building control … I suppose if you dropped a bomb and looked at the devastation, you might get a picture of what areas might start to look like.
Karl Baker, building inspector

The programme focused on the domestic side of construction, which often attracts less capable contractors, backroom developers and often hopeless DIY-ers. It illustrated what building control have to put up with from these groups owing to a lack of understanding, incompetence, corner-cutting or a blatant trying to get round the regulations.
Dan Henn, partner, Tuffin Feraby Taylor

The serious issue behind this documentary is the lack of compliance with Building Regulations at the bottom end of the market. Birmingham council should be praised for funding a team to tackle the problem of cowboy builders. As builder registration schemes have failed to achieve results, more cities should follow Birmingham’s lead.
Tony Fenton, head of building control, Westminster council

I thought it was awful. It reminded my why I left the sector. I feel the subjects were selected on their ability to shock and entertain and not to give an accurate or fair portrayal. It ignored the commercial side entirely. A typical day in the life of an approved inspector is totally different from what we were shown, with much more variation in projects. I think young people might be put off entering the profession after watching this.
Geoff Wilkinson, vice chairman, the Association of Consulting Approved Inspectors