7
In the frame
Focus 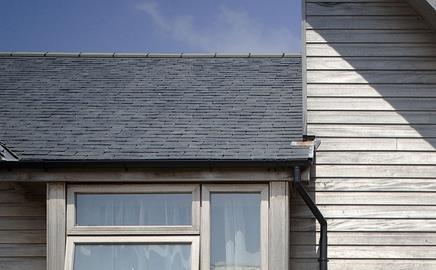 Doors and windows Until recently, relatively few specifiers chose wood over PVCu for their windows. But, as Eleanor Cochrane reports, the arguments are now going timber’s way

Times are good for those at the top of the tree in the timber windows market. Mumford & Wood is expecting its business to grow 40% this year and this isn’t an isolated case. Indeed, a recent report by Palmer Market Research showed the market for softwood windows grew 15% in 2006 while hardwood went up 20%. This is also significant because the growth of timber windows was at the expense of PVCu, which declined for new build for the first time ever.

So why are specifiers turning to wood rather than PVCu? “I think it’s led by the public’s awareness of environmental issues,” says Chris Wood, sales and marketing director at Mumford & Wood. “It’s on everyone’s agenda – the public, government, architects and councils are all specifying timber rather than PVCu.”

The environmental credentials of timber windows lie in the fact that they are made from a renewable resource, provided they are sourced from sustainable forests. In contrast, a main component of PVCu is derived from oil. Despite many studies into the two materials, the debate over which is greener is still raging (see box, below).

Many, however, are already convinced. “Timber windows, from a sustainability point of view, are better,” says Andy Senator, group technical manager for housebuilder Countryside Properties. Senator says Countryside has favoured timber windows for years, partly because of their sustainable credentials. He believes the Code for Sustainable Homes, due to be launched this April, could put pressure on others to follow its lead. “The code will favour timber and that could be really significant for the industry.”

The code is particularly meaningful for social landlords, as organisations that receive Housing Corporation funding already have to build to level three of the code. It is optional for the private sector. Stephen Oxley, regional director at Faithful + Gould, specialises in advising housing associations. He says that, although attitudes vary from client to client, he is starting to see a shift: “Clients are moving from PVCu to timber – and good quality timber, not the cheap end.”

It is not simply the sustainability argument that is winning housing associations over, however. Richard Baines, director of sustainable developments at the Black Country Housing Group, says he refuses to specify PVCu windows because of the risks highlighted in a Greenpeace report in the late nineties. This claimed PVCu contributes to the ferocity of fires and that it can affect male fertility. “CDM regulations state that the specifier is responsible – and I, as the client, can be classed as the specifier,” he says. “I could be sued by tenants if these theories prove true.” Black Country Housing Group tends to use aluminium timber composite windows in its developments, instead.

We’re seeing clients move from PVCu to timber – and good quality timber, not the cheap end

Composite windows are very durable, which makes them the obvious choice for developments on which maintenance is an issue, such as social housing or tall buildings. On the maintenance issue, suppliers of PVCu windows have tended to win the marketing advantage, but timber window manufacturers are fighting back. While they don’t deny that timber windows require maintenance, they point out that PVCu windows are not maintenance-free either. “People thought PVCu was a cheap, long-life, low-maintenance product but they found that if it breaks they can’t replace it, as they can with timber,” says Wood. “PVCu discolours, becomes brittle and doesn’t give the all-singing, all-dancing performance they thought.”

The growing emphasis on lifecycle costs has also worked to timber’s advantage. “Timber windows typically have higher up-front costs but over their lifecycle they are cheaper than PVCu,” says Tony Pell, product manager at window and door manufacturer JELD-WEN. This is partly because timber windows tend to have longer lifespans than PVCu, helped by recent improvements in quality.

The industry has also responded to housebuilders that want the factory finish that PVCu has always offered and a supply-and-fit service. “In the past we’ve been slow to drive innovation,” says Pell. “Now we’re getting more housebuilders coming to us because we offer a supply-and-fit service for a product with a factory finish and glaze.” In fact, the Palmer Market Research survey shows that, in 2006, 67% of timber windows installed in new builds were factory finished, compared with 50% in 2005. Pell also points out that new products, such as wooden cavity closer systems, mean windows can be installed much later in the build programme, like PVCu, rather than at the beginning.

A main reason for opting for timber over PVCu has always been its aesthetic appeal. Black Country’s Baines is outspoken on the matter – “PVCu windows look awful, they’re ugly things” – and while most don’t phrase it this strongly, there seems to be a consensus that timber windows are the preferred option for the more discerning customer. Wood says there are more of those than ever: “People are more educated,” he says. “They think more about the design and value of properties.”

So, if installing wooden windows is easier, cheaper in the long-run, being encouraged through legislation and adds to the value of property, it is likely that the rise of timber windows will continue apace. That said, despite declining by 2.5% this year, PVCu’s market share stands at a massive 76%. Wood has a way to go yet.