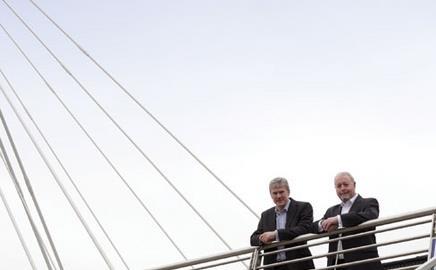 David Tuffin started Tuffin Ferraby Taylor when people wore loon pants and voluntarily listened to the Bay City Rollers. Several recessions later, he’s handing it over to a new generation. But isn’t that going to be a bit tricky right now?

Most 25 year olds who chuck in their job begin anxiously looking for another, especially if they have a large mortgage and a small family to provide for. But then again, they probably wouldn’t have ditched their job in the first place, no matter how bad an argument they might have had. Not David Tuffin. He walked out of a small south-west London surveyor in the early seventies and immediately opened his own business in a spare bedroom. Shortly after, Michael Taylor and John Ferraby joined him. It must have been quite crowded in there...

Thirty-five years later he is faced with another big change: Taylor and Ferraby have gone (although the former still helps out the firm’s public sector team) and this month he is to follow them into retirement. But how best to leave a firm this time?

If the question is bothering him, it doesn’t show. The managing partner of Tuffin Ferraby Taylor seems relaxed about his departure as he discusses it with Alan Pemberton (managing-director-in-waiting) in TFT’s Waterloo office. And this despite the fact that he is handing over the reins during what looks like the scariest recession for 80 years. But let’s get one thing straight: “I’m not retiring because of the recession. Nobody’s chucking me out. When we founded the company it was written in the rules that everyone would retire at 60. I will carry on working here part time as a consultant.”

Four partners will take over the business, which now has a turnover of £11.8m. These are Pemberton, Paul Spaven (business development), David Mann (finance) and Chris Keats (HR and operations).

One factor that made the handover easier is that TFT is a limited liability partnership and by retiring from it Tuffin is withdrawing his capital, which is being replaced by the remaining equity partners. This means that no money changes hands and the potentially divisive issue of equity valuation is avoided (see below).

It has also been planned for more than three years. Of course the world has been turned upside down in that time, so it’s fortunate that Tuffin plans to stay in touch. Technically he’s acting as a consultant to the firm’s new expert witness division – likely to be a growth market – but he will no doubt be available for ad hoc advice. “This is my fourth recession,” he says, cheerily.

TFT does a lot of work for big commercial property clients, which is not a market you’d want to be exposed to right now. Listening to Tuffin and Pemberton, however, you could easily believe that the recession is nothing more than a bracing cross-country run. “Managing a business in tough times has advantages. There is less competition and if it goes on to survive, then it will naturally do very well,” says Tuffin.

He says these advantages will apply to the firm. He also believes that because of the new structure, the staff and management will pull together. “In the so-called good times everyone thinks they can walk on water,” he says. “They’re all masters of the universe and when things go wrong, everything falls in a heap. At the moment, people are more likely to be concentrating on heading in the same direction and surviving.”

Pemberton echoes his view. “The recession means we will push forward with a more entrepreneurial way of doing business.”

By this he means the expert witness programme, which will cater for a likely rise in legal disputes. The firm is also hoping to win work from the vulture funds that will buy land and firms when the market is adjudged to be at its lowest; they will be offered transaction services and due diligence advice. Naturally, TFT is also investing in marketing to advertise these services and in training to make sure staff are up to speed.

That said, Tuffin is aware that the recession means an unsure future for any company.

I don’t doubt that the group will survive under the new management, but I am concerned about the unknown,” he says.

“I don’t know when the banks will stop buggering about so we can get back on track.”

But he thinks there are various ways of reacting to the situation. “It would be very easy to put a tin hat on, hunker down and hope it goes away rather than getting out there and dodging some bullets.”

It’s certainly a strategy, but soon it won’t be his problem. For his part, Pemberton has a more defensive attitude (as is only natural for someone who played in goal for England’s under-18 football team). “I have a different character to David when it comes to moving forward,” says Pemberton. “I’m one to make sure we get information properly presented and analysed appropriately.”

Tuffin concedes that he does expect that his successor will introduce a more methodical style. “Alan has done an MBA and has the skills to meticulously plan out the future,” he says. “It will be different to my rather seat-of-the-pants tactics.” The men laugh in agreement. It all seems rather smooth and amicable for a takeover from someone who has been at the helm for 35 long years, in the middle of a recession.

As the pair prepare to have their photograph taken, they continue to joke. “The only thing that the recession will affect badly will be my present and leaving do,” says Tuffin. “I expect I’ll get a pair of socks, a jigsaw puzzle and a packet of sandwiches instead of a proper send-off.”

“Don’t worry,” says Pemberton. “We will have something planned. Perhaps a bungee jump off London Bridge without the bungee …” For the company’s sake, let’s hope he’s kidding.

How to hand over in a downturn

The main challenge is valuation, because in a downturn the value of the business goes down, writes David McCorquodale. This can be difficult, as the price expectation of the departing executive will have to adjust. A business that was worth £20m might now only be worth £10m. It can almost feel like the guys taking over are trying to take you for a ride when actually, they are just offering what they can afford.

Be aware of the differences between handing over certain types of business. With a consultancy like Tuffin Ferraby Taylor, the value is tied up in the individuals. That means there is always a risk that relationships and contacts that have been built up over years will wane once the original management has left, so these must be passed on beforehand. Some departing managers offer to stay on to keep an eye on things – for example, by doing consultancy work. But human nature can get in the way and when it’s a lovely day and the golf course is beckoning, the reality is that they may not be around for as long as they said. The management team taking over should be aware that this is a possibility and be able to cope on their own if needs be.

The new guys have to be fully aware of what it will mean when they formally take over. They may have been practically running it for months, but it’s not the same as having sole responsibility. The good thing about a recession is that it forces people to manage risks better and so taking on a new business in this climate will mean fewer people go into it unprepared.

David McCorquodale is a partner in KPMG