Learning through play: the Constructionarium 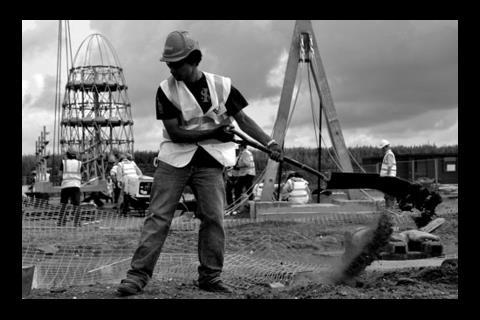 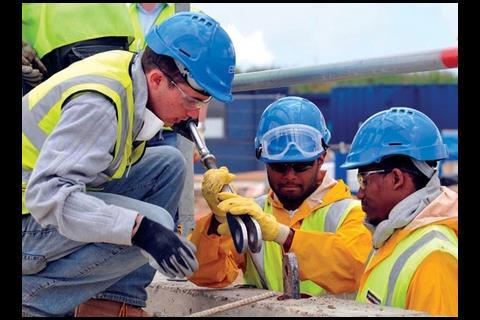 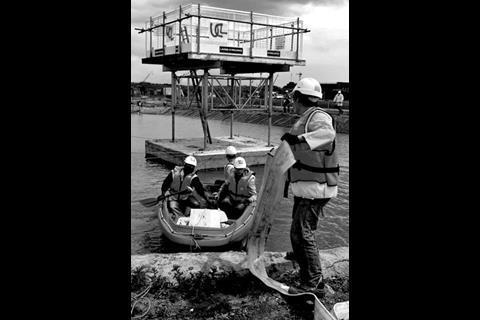 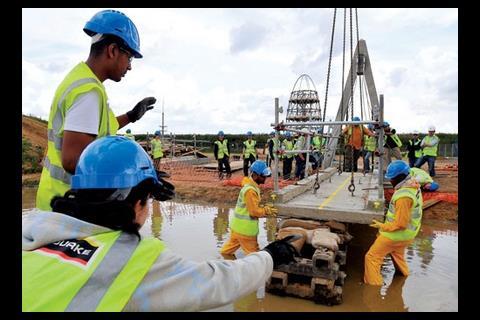 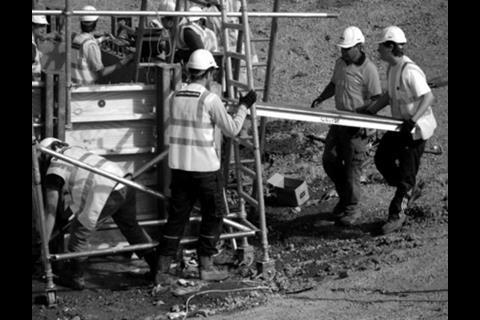 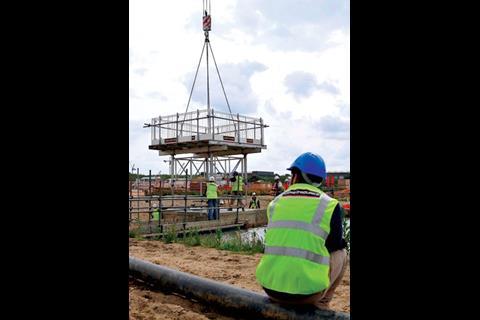 The philosophy behind Constructionarium is that taking notes in a stuffy classroom can never compare to real on-site experience. Emily Wright went along to find out if this was true

‘Is that a fashion statement, love?” says project manager Matt as he looks down at my site gloves. They are hardly a perfect fit and I am finding it difficult to hold anything when wearing them. Having originally assumed they were just badly made, I look at the 40 other pairs of gloved hands and see the real problem. “I’ve put these on inside out, haven’t I?” “You have, yes. And you’ve also got them on the wrong hands. Come here.” He chuckles to himself as he helps me correct my ridiculous mistake. “All done. That better?”

Far from finding Matt’s authority overbearing, I am impressed. Impressed because he has never worked on a real site before and he is just 19 years old.

I am at Constructionarium, the education scheme that holds five-day courses for students at the National Construction College (NCC) in King’s Lynn, Norfolk. Building revealed last week that Howard Shiplee, construction director at the Olympic Delivery Authority, had agreed to launch a branch of the scheme on the Olympic park site from next year. Former construction minister Nick Raynsford became the president of Constructionarium this month.

The brainchild of Stef Stefanou, chair of concrete contractor Doyle, Constructionarium was launched five years ago for civil engineering and building degree students. They come here to build scaled-down (1:50 or 1:100) versions of real structures and must manage their own projects. Each university forms a team called a “triangle” with one contractor and one consultant, and these support the students financially and provide mentors to help out during the week. Constructionarium started with one triangle in 2003, but expects there to be 18 by 2009, including an Italian team. The event has even been adopted by some universities as a module. With companies such as Laing O’Rourke, Costain, Atkins and Arup getting involved in the scheme, it seems it could be the next big thing in training.

Despite all this, I didn’t really see myself as a Constructionarium sort of girl – the gloves were a dead giveaway. Moreover I had visions of my three-day experience with 40 Loughborough university students being all drinking by night and hungover tinkering with shovels by day. How wrong I was. Everyone was up at 6am to get on site early. They worked through lunch to hit deadlines and were falling asleep into their pints by 9pm. Here’s how my three days with them turned out.

By the time I get to King’s Lynn, the students are already two days into this week’s cycle and are working on the Ravenspurn Oil Rig and the Kingsgate Bridge. These are two of 13 possible projects that students can build at Constructionarium. This week those working on the oil rig must successfully float it out into a lagoon, then sink it. The bridge must be constructed in two halves and then swung out to meet in the middle.

At the site there is a 60m-long, 2m-deep lagoon ready for the oil rig, and a river flowing under where the bridge is supposed to sit. An 11.1m replica of the Gherkin, a project left over from last week’s course, towers over the site. The whole area is buzzing with activity. Teams are working away earnestly and orders from project managers seem to be being carried out without demur.

A part of me is disappointed. I was expecting chaos and drama, fights and tears. Even Tony Millikin, who is in charge of the site at Constructionarium, says it can get dull when things go to plan. “We shake them up a bit,” he smiles slyly. “We say that things are happening earlier than they are to get them panicking – but on a real site things like that happen all the time, so it’s good for them!”

I am asked not to bother the students today as they are preparing for an all-important concrete pour – “if they’re not ready it’ll cost them; they have a budget to stick to,” says Millikin – so I take the opportunity to chat to some of the representatives from the other corners of the triangle – Laing O’Rourke and Waterman. Daniel Ball, a senior engineer at Waterman, is impressed: “They are doing really well. They achieve some amazing stuff here and in just a week. It’s good to see the natural leaders come into themselves.”

He adds, and the Laing O’Rourke guys agree, that the week is also a great opportunity to scout for new recruits. “Students get offered jobs on the spot,” says Millikin. “The supporting companies will think, ‘He’s good. I’ll have him.’ One of the supervisors here this year had been part of the first Constructionarium and been given a job as a result.”

At 3pm on the dot the concrete arrives and things are looking, and sounding, more like a real site. “Well, we’re clearly not fucking ready, are we?” shouts one of the oil rig crew. “Um … no,” comes the echoing response from the bottom of a hole as others tinker away with the base of the structure.

We go to see if the Kingsgate Bridge team are any further ahead. They are not. As the students run round like headless chickens, the concrete deliverer has the kind of smile on his face that says he’s seen it all before. I also notice he has brought the newspaper with him. “Do you use the same guy every week?” I ask Millikin. “Oh yes,” he smiles back. “He knows the drill!”

I didn’t know the names of half the tools when I got here. Now I even know how to use them. Also we’ve learned how a team operates on a real site

An hour later and, finally, the teams are ready. All goes smoothly as they line their structures with concrete. Teams work closely together to make sure it is packed down properly to ensure a smooth finish. Once the pour is complete there is nothing more to be done so it’s an early finish – on site at least. The work doesn’t stop there, however. The students must hand in a detailed daily report, so they head back to write it and plan for the following day. Both teams are working on strategies well into happy hour and although some make it out for a swift half, for most it’s bed by 9pm. Whether it’s the bracing Norfolk air or the hard labour, Constructionarium appears to have sucked the will to party out of this lot.

The teams have been up since the crack of dawn and the structures are taking shape. “This is our project,” says one of the bridge team proudly. “The Kingsgate Bridge in London…” A quick confab with the lecturer ensues, and then a swift revision: “This is our project. The Kingsgate Bridge in Durham.” When asked about how the team has worked together, the lads (there are only two girls out of the 40 students) are full of mutual praise. “We’ve worked out some of the teething problems,” says one student. “Everyone was running around all over the place so we decided we needed a leader and Matt’s been great.”

The oil rig team are equally buzzing as their project takes shape. Tomorrow they will have to float their structure, sink it and then climb on top. There is a lot to think about before then. “Everyone has come together in a way I wasn’t expecting,” says the team’s project manager. “People have listened to what I’ve said and seem to be learning new skills every day. It’s been invaluable and I’m now 100% confident our project will be a success, too. I can’t wait until Friday!”

Robin Holdsworth, Constructionarium’s overall scheme leader and executive secretary of Construct, the concrete contractors’ association, is on site today. “This scheme allows students to get out on site and make mistakes,” explains Holdsworth. “On a real site, messing up is bad. Here it’s not a disaster. That’s not to say we spoon feed them. They have to take responsibility.

“This year 680 students have done the week here and next year there will be over 800. The only restrictions are accommodating them all and the time of year. In winter there is not enough light to achieve what they need to in a week.”

Holdsworth says the plan is eventually to open up the scheme to qualified graduates. As well as the addition of the Constructionarium within London’s Olympic Park, the site at the NCC will expand to introduce some road and rail projects and potentially sewage schemes as well. “The test for that will be to drink the water that goes through the system,” smiles Holdsworth. “Now there’s an incentive to get it right!”

On the final day everyone is nervously checking and re-checking their projects, down to the last joins and screws. It’s the oil rig that is the first to undergo its big test. The dry dock is flooded and … it floats! “I am so excited,” shouts out one of the butchest boys on the team as he jumps up and down on the bank. The gate between the dry dock and the lagoon is pushed down and the team hauls the 19 tonne structure into place. It is filled with air and within a matter of minutes it sinks. Success! A little orange dinghy is rather inexpertly ferried from bank to rig until every team member is up on top and the champagne flows Grand Prix style.

For those on the Kingsgate Bridge team, the results are not quite as perfect. The two halves of the bridge swing successfully but don’t meet in the middle. “Oooh, mind the gap,” jeer the others from their sturdy oil rig. But a quick touch up job involving a large Loughborough university banner and the gap miraculously disappears and they all pile on for their photo.

It’s all great fun. And as the champagne flows and the students whoop and cheer it’s clear they have had a ball. But have they learned anything? A survey back in 2005 showed that 75% of students believed that Constructionarium had improved their skills and abilities as engineers. And 53% said the scheme had improved their motivation levels.

In 2008 the reaction appears to be the same. “I feel so much more confident after this week and I understand much more clearly what we talk about in class too having seen things in action and being involved myself,” says Kingsgate team leader, Matt.

“I didn’t know the names of half the tools when I got here on Monday,” says another. “Now I know exactly what they are called and how to use them. Also we’ve learned how a team operates on a real site and how you iron out problems. You just can’t get that kind of experience in a classroom. This has been a fantastic opportunity for us all and the fact we are still smiling after five days of getting up at 6am even though this is actually the first week of our summer holidays proves it!”

The video below shows students getting to grips with real life construction scenarios. It was produced by Laing O'Rourke, who supplied materials and equiment, and Faber Maunsell, the designer and resident onsite engineer.