Architect Sheppard Robson’s partial conversion of the Westminster Register Office complex to house the London Business School includes a glazed link building for the school’s entrance. The problem was finding a cladding solution that fitted in with two neighbouring buildings that were structurally misaligned 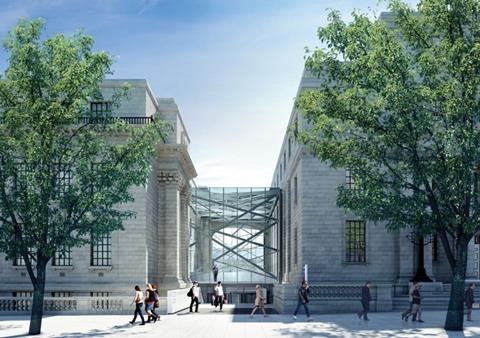 As secular marriage venues go, they probably don’t come much more famous than Westminster Register Office. Not only has the venerable central London venue hosted the nuptials of two of the Beatles, scores of celebrity weddings have also taken place there including those of Countess Spencer, Nicole Fahri, John Hurt, John Fashanu, Dave Gilmour, Terence Stamp and Antonio Banderas.

But the building is soon to be known for quite different reasons. Architect Sheppard Robson is extensively renovating and partially converting the complex into the new home of the London Business School. The business school is currently located in nearby Sussex Place, one of architect John Nash’s most spectacular, if idiosyncratic, Regent’s Park terraces.

Initial proposals to temporarily relocate the school while Sheppard Robson refurbished Sussex Place grew into the much more ambitious current plans which also now involve a new permanent home for the school within the Marylebone Register Office complex. Strip out began in February 2014 and the project is scheduled for completion in autumn next year.

The register office itself is located within what is now popularly referred to as Old Marylebone Town Hall. With its soaring peristyle tower and deep loggia of giant twinned Corinthian columns, the monumental Edwardian baroque building is one of the most prominent landmarks on the Marylebone Road. It was built between 1914 and 1920 and was completed 19 years before the opening of the Library Annexe that sits directly beside it on the opposite side of a dividing passageway and which adopts a cooler, more restrained form of classicism. Both buildings were completed by Edwardian architect Edwin Cooper and both are Grade II listed. 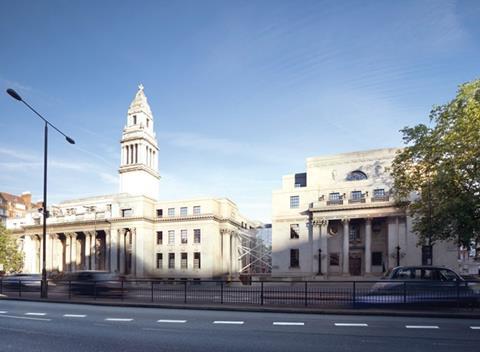 Under the renovation plans, principal ceremonial rooms within both buildings will be extensively refurbished and retained for use by Westminster Registrar’s Office. But the remainder of the buildings’ interiors will be converted into state-of-the-art accommodation for the new business school. This will include the transformation of the council chamber, itself a 1960s replacement of the original chamber bombed during the Blitz, into six new lecture theatres ranging from 100 to 285 seating capacity.

But the most prominent part of the building and the most significant from a cladding perspective will be the new school entrance planned on Marylebone Road. A glazed link building will enclose the dividing passageway between the town hall and the annexe to provide a dedicated entrance to the school. The entrance was required because the original formal entrances within the paired classical facades were to be retained for registry use.

In order to maintain the volumetric differentiation between the two existing blocks, the new glass structure will be significantly set back from the principal facades. Also, in an unorthodox gesture for a public building, this new entrance is set lower than the ground floor and will be reached by going down a full-width flight of external stairs.

The entrance level will subsequently be located within excavated ground situated on the same level as the narrow basement lightwell pit that runs the perimeter of the buildings. This will thereby expose the lightwells’ intricate rusticated stone to full view for the first time. The entrance will also be placed beneath a new bridge spanning the full width of the link building at ground floor level. 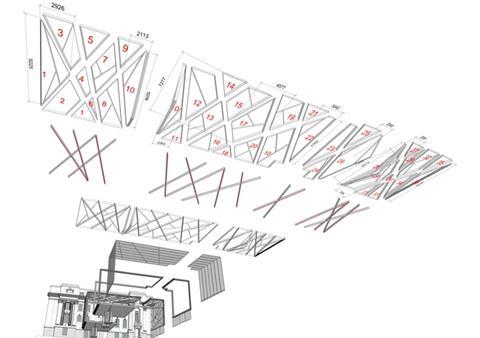 According to Sheppard Robson associate partner Gavin Robinson, lowering the entrance level enabled all the security barriers and apparatus behind the entrance to be “obscured from public street-level view and thereby not interrupt the visual connection between the buildings which was a key planning requirement”.

Equally, Sheppard Robson associate architect Paolo Longo explains that glazing was also selected as the material for the link building to “clearly define it as a new, separate volume from the historic blocks on either side and to maintain a pure and transparent view between the buildings and through the passageway to the rear”.

However, achieving this transparency proved challenging. Paolo elaborates that early discussions concluded that “the link building should be supported by the existing buildings on either side rather than be structurally independent. This would enable the space within it to be column free and it would also visually connect the new intervention to the older buildings”.

However, the problem was that the existing structure of the historic buildings could not be relied upon to provide the support needed. While the town hall is a traditional load-bearing structure that was in reasonably good structural condition, the annexe building on the other side was a steel frame building in which much of the steel and stonework had corroded to a level that could not provide adequate support for additional loading. 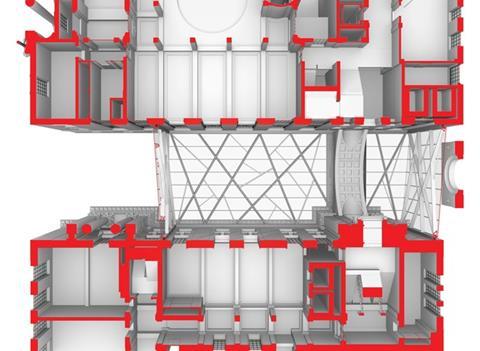 But the other major problem was that despite uniform classical appearances, both buildings were structurally and compositionally misaligned which meant that any new rational structure that lined up with conditions on one side of the link building would inevitably be askew on the other. As Longo explains: “It just proved impossible to design a regular, rational link.”

The solution is a diagrid, aesthetically randomised, trapezoidal glass and cladding system that, according to Robinson, “is not a standard atrium with a roof and two walls at either end but a cladding system that works like a lattice structure and wraps from one end of the link building to the other.”

Structurally the cladding system is split into four core elements that help deliver the visual transparency that the planning requirements demanded and the structural flexibility that consolidates the multiple misalignments between the two buildings. First there are the primary steel members that support the link building’s structural frame and help transfer loads into the existing buildings on either side. These are steel beams that extend diagonally across the full width of the link building roof.

To the naked eye, many of these members will be concealed by the cladding system’s second elements. These are steel “loop plates” or cover panels that enclose the steel beams in a “V” section channel. In order to conceal joints and provide the visual continuity the architectural concept required, the plates are cast as parallelogram loops that fit into the openings between the tracery of steel beams, thereby concealing potentially exposed fixings. 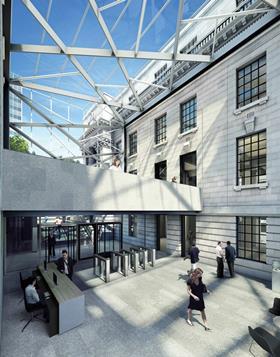 The third elements are the glazing bars or carriers that sit above the primary steel members. These are slender aluminium channels that support the glazing and follow a more rational setting out plan than the primary steel beams. They are arranged in horizontal bays that subdivide the full width of the link building and provide the frame in which the glazing rests.

And the last element is the glazing itself. These will be rectangular panels of toughened double-skin glass up to 9m in length that will form the final outer skin of the link building. While rational in form, the glazing will obviously allow uninterrupted views through the link between and of the randomised pattern created by the primary steel members within.

Robinson describes the chief challenge of the design strategy as “finding a cladding solution that links two buildings with different constructional characteristics and where the structure of each building is not in alignment.” The obvious benefit of the diagrid cladding solution is that it allows beams to be supported by expanses of masonry wall on either side of the new entrance that are not directly opposite each other. “It may look random,” says Longo, but every element belongs to the diagrid which is entirely generated by the two buildings.”

Consequently, Longo describes the constraints established by the existing structure as a double-edged sword. “We were completely bound by two different structural conditions so something that worked on one side, might not work on the other. But looking at it another way, every time there was doubt or conflict; it was solved by the existing buildings themselves.” The result will be an innovative and striking new contemporary intervention that, despite initial appearances, is wholly embedded in the structural composition of its historic neighbours.