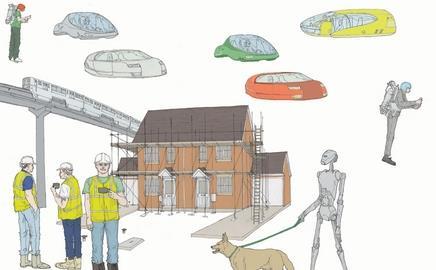 Spaceships, check. Robots, check. Same old buildings … erm, check. The future could be a worryingly familiar place if a CIOB survey into innovation in the construction industry is correct.

This should be an exciting time for construction research and devlopment (R&D). With ever tougher sustainability targets to concentrate the mind, the industry should be doing everything it can to develop new ideas. Unfortunately, the depressing conclusion of the Chartered Institute of Building’s (CIOB) 2007 survey of innovation in the construction industry is that it isn’t.

The CIOB believes construction is naturally an innovative and problem-solving industry, so it was surprised by a report by the Office of National Statistics in January that said the industry spent just £33m on R&D every year. This is less than 0.02% of its turnover and, even worse, is actually decreasing. The agricultural industry, on the other hand, spends £127m – 12% of its far smaller turnover.

All 459 respondents to the web-based survey think R&D is important to the construction industry, and nearly two-thirds consider sustainability the area that requires the most attention, specifically energy efficiency and carbon reduction. Clearly, all those revisions to the Building Regulations and the constant talk about carbon tonnes in the press have sunk in.

Unfortunately, only product manufacturers seem to be doing anything about it – nearly 70% of respondents said they are the ones producing the most innovations.

Most people said their firms spend less than £10,000 a year on R&D and nearly two-thirds said it should be more. The three innovations respondents said they had benefited from most over the past five years were IT-based and originated from outside the sector, pushing off-site construction and CAD into a distant fourth and fifth.

Respondents had many ideas for sustainable technologies – but many already exist, which implies that new ideas are not being shared. The CIOB suggests a web-based forum might help, with information on how to develop ideas, what’s already out there and whether certain areas qualify as R&D and therefore for tax credits.

That’s probably not a bad idea, since nearly half said cost efficiency was the main driver of innovation. A quarter said grants or funding were the best ways to encourage innovation – slightly more than the number that called for collaboration and partnering. It seems that, no matter how many pictures of baffled polar bears on melting ice caps grace the front pages, money will still determine how much the industry does to stop the impending Armageddon.

Read the full version of the survey via www.building.co.uk/reports