Moving-floor technology may seem the stuff of fictional super-villain lairs, but the leading hydrodynamics laboratory at Plymouth University has employed the technology to support one of the largest energy wave test sites in the world 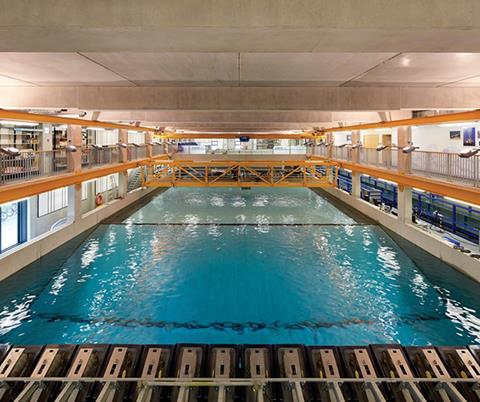 Raised or moving floors may not be a new invention, but one of the latest versions of the technology represents one of the most groundbreaking variations of the system ever built.

Aficionados of vintage Hollywood cinema will recall one of the earliest examples of a moving floor in popular culture when, in a memorable scene in Frank Capra’s It’s a Wonderful Life, a dancefloor opens to reveal a gaping swimming pool below. Though the film was made in 1946, the scene was set in 1928, so moving-floor technology has been established for some time. But rarely has it been used as part of scientific research, until now.

Designed by Burwell Deakins Architects, the new facility forms the centrepiece of the South West Marine Energy Park. But its own centrepiece and the source of its pioneering contribution to the world of movable-floor technology are the Coastal Ocean and Sediment Transport (COaST laboratories where scientists and engineers can run tests within simulated wave, wind and current conditions and then model and analyse the data produced.

The laboratories house two innovative concrete water tanks. The smaller upper tank models coastal water conditions and can simulate waves up to 1:200 and 1:100 scale. Sand and sediment can also be added to more accurately replicate coastal conditions. The larger ocean tank can simulate waves up to 1:20 scale and is one of the largest energy wave test sites in the world. 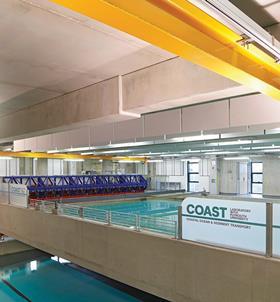 Measuring 35m x 16m and about 4m deep, the tank can simulate both short and long-crested waves well over 1m high to form one of the most accurate artificial representations of seascape behaviour in Europe. But it’s most ingenious feature is its raisable floor capable of rising the full 4m height of the tank.

There are several reasons why the design team opted for such a floor, most related to costs and time. Despite using huge amounts of water, scientific wave testing laboratories are charged for their usage the same way as domestic properties are: the more they use, the more they pay.

With such vast amounts of water required, costs can be prohibitive, particularly as most tanks need to be completely emptied before new tests can be performed. This is to provide access to the base of the tank to set up the next experiment. Emptying such large tanks can also be severely time consuming with the process lasting for several hours and sometimes days.

Most conventional tanks of this nature also use what is known as a sump system. Here, the pool is drained and filtered each time a new experiment needs to be set up, again an expensive and time-consuming process, particularly when the facility is charged for using new water.

By having a floor that rises to the top of the tank, water is able to pass down through the surface of the rising floor platform to occupy the void below, thereby ensuring the same water can be used for the next experiment. Also, this enables the scientists and engineers to “walk on water” if necessary, either during test conditions or when new experiments are being prepared. 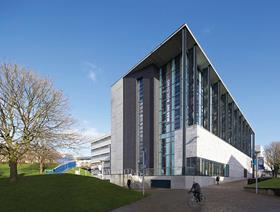 The floor itself is a stainless steel frame with a platform comprising GRP panels that sits within the in-situ ocean tank. Though primarily solid, the floor is strategically perforated to allow water to flow through it when it is being raised. The floor is lifted by six hydraulic rams fixed to its underside that lift the platform into its required position. These rams have been procured from North Sea oil rig fabricators and use the same technology that would be used in the underwater oil extraction process. Brushed steel components along the perimeter of the floor glide against runners fixed to the tank wall surfaces and assist the floor lifting operation.

The tank is also ramped at either end and the waves are generated by more than 20 2.7m-high paddles that are hinged to the tank base. This means that wave conditions can still be present while the floor is in motion. Multi-directional deep-sea and surface-water currents can also be produced by customised recirculation ducts and ship propellers installed in the tank. Again, none of these impinge upon the floor-raising process.

According to Burwell Deakins director Scott McCallum, this innovative flooring solution has “meant that the turnaround time between each experiment has been reduced twentyfold, allowing the university to have a much fuller academic and commercial programme over the year. Working with university academics from the very earliest stages of the project allowed the team to be far more ambitious in designing greater capability for the university at lower cost.”

McCallum also points out that these lower costs helped realise two significant cost savings, which have widely benefited the academic well-being of the university. “Because of the savings in water costs and usage created, the university was able to afford the second, smaller coastal tank and has been able to allocate more money to its principal concern - research.”