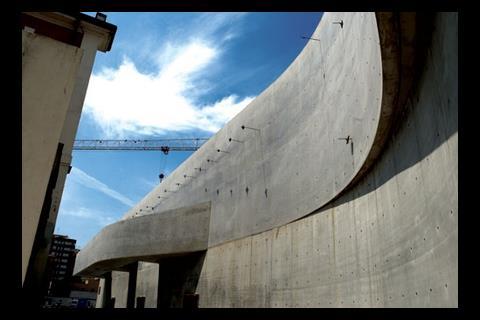 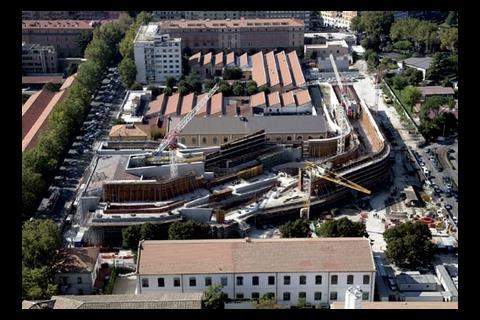 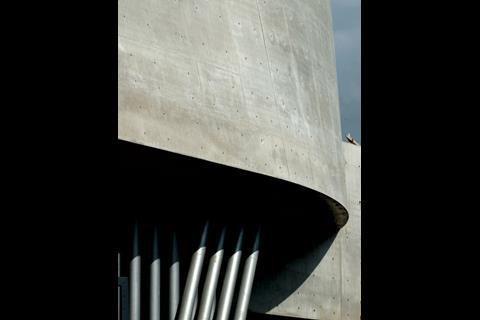 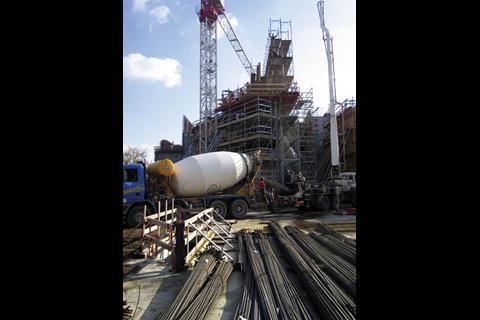 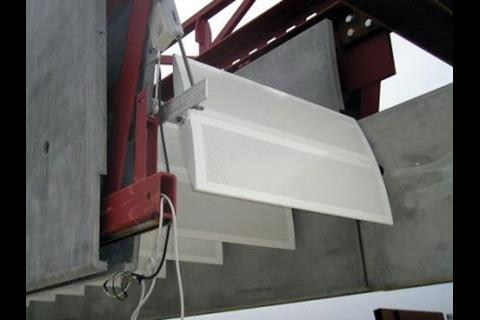 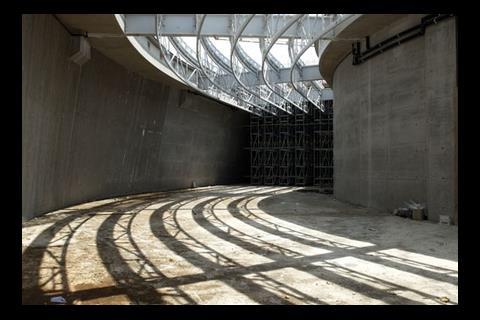 Its long, flowing, windowless walls evoke an aircraft carrier recreated in bathtub-smooth concrete. This is Zaha Hadid’s national museum of XXIst-century arts, dubbed the MAXXI museum, which is now under construction in Rome. Putting aside Hadid’s unique sinuous style for a moment, the project could be taken as Italy’s answer to Sir Colin Wilson’s British Library in north London, completed in 1997. Both are major national cultural institutions designed by top architects and both have been victims of stop-start funding from their respective government clients.

Hadid’s design was chosen through an international competition in 1998 and the contract was let in December 2002. To date, only two of the three main floors have been cast in concrete, and completion is not expected until 2009.

But although Italian governments score even lower on dependability than their British counterparts, the project and its special architectural qualities have been protected from the erratic funding in several ways: a unique procurement system; the use of advanced techniques for the materials, in particular the insitu concrete; and, as far as the glass roofs are concerned, the innovative design input from the contractor.

To start with the procurement, Hadid’s competition-winning design was immutably fixed into the contract. And even though the contract was let on a design-and-build basis, Zaha Hadid Architects was retained by the government to carry out full detailed designs – amounting to 540 drawings – and to control the visual aspects of all drawings by trade contractors.

The contract was won jointly by two long-established local firms, Italiana Costruzioni and Società Appalti Costruzioni (SAC). But getting money from a government notoriously slow to pay up threatened to destabilise the project.

“The slow cash flow caused huge difficulties,” admits Marco Odoardi, Italiana Costruzioni’s technical director for the project. “Payments from the government were often delayed by 90 days, but we had to pay our subcontractors every 30 days.” The arrangement the two firms came to was for Italiana Costruzioni to take on all the physical construction and for SAC to smooth cash flow whenever there were gaps in the funding.

With SAC providing a financial safety net, Italiana Costruzioni kept a small but constant workforce of about 80 people on site. The project is run by two government departments: the ministry of culture as end-user client and the ministry of infrastructure as procurement client.

“They are both long-standing clients of ours, so we made a gentlemen’s agreement to keep construction going,” says Odoardi. “Another contractor would have closed down the site after some months without money coming in from the client to pay for manpower.”

Gianluca Racana, Hadid’s associate running the project, offers a slightly different version of events. “The site nearly closed down because of the slow public funding,” he says. Even so, he is quite upbeat about how this affected the project. “The delays gave the contractor time to find the best concrete solution and to test it out in a mock-up at the rear of the site.”

The exposed concrete is the dominant element in Hadid’s design. All that is visible of the building from the outside are smooth windowless concrete surfaces that make up the external walls and the undersides of concrete floors as they vault over huge voids up to 45m wide and cantilever outwards by an alarming 20m near the main entrance.

Hadid’s design posed two huge challenges to the concrete design. The first was structural, as galleries are basically elongated linear spaces with floors and walls all cast in solid insitu concrete. Crucially, though, the roofs are not concrete but fully glazed to provide natural daylighting, meaning the galleries are not boxes but effectively troughs with glass lids. Alan Jones of SKM Anthony Hunts, which contributed structural design to Hadid’s competition scheme, says the building functions structurally more like a footbridge than a building. “Only the floors and walls, but not the roof, provide structural stability,” he says.

The second concrete challenge was Hadid’s demand for a premium-quality fairface finish. This had to be silky smooth, unblemished by air-bubbles and with crisp circular holes left over from the shuttering bolts. More than that, Hadid did not like the look of the exposed joints between concrete pours, so these had to be kept to a minimum.

The structural demands on the concrete meant all the external walls and floors, whether or not they spanned great voids, had to be stuffed with steel reinforcement bars at a density of up to 300kg/m3. Reducing the number of joints had the effect of increasing the concrete pours to an enormous 70m in length and 9m, a full storey, in height, which required 260m3 of in-situ concrete. Formwork was fabricated by Peri in Germany in modular panels 9m long and 2.4m high. These were assembled on site into shuttering for the large pours using laser beams to ensure precisely flat surfaces.

A liquid self-compacting concrete mix was specified that would settle evenly by gravity over the whole length of the pour and around the reinforcing bars. A fine aggregate of powdered limestone and an epoxy-resin additive were specified to help compaction and give a smooth, crack-free surface finish.

These stringent demands also laid severe restrictions on how the concrete was batched and poured. To prevent the liquid concrete mix from disaggregating, it was poured very slowly and evenly, with the end of the supply hose kept just 150mm below the surface. The huge pours took up to 18 hours to lay, and to prevent premature curing, the concrete was mixed on site in four large batching plants.

While the concrete was poured, the formwork panels were monitored by nanometers to check for outward bulging. Finally, as the large concrete pours had to cure slowly and evenly without overheating, casting was banned if the external temperature was anticipated to rise above 25°C. In Rome’s Mediterranean climate, this meant concrete could only be laid from November to April.

The glass roofs of Hadid’s design posed an entirely different challenge. While the solid walls and floors are basically inert concrete slabs, all the environmental controls are packed into the glass roofs. The glass roofs provide natural daylight for viewing the paintings, drawings and sculptures exhibited below but, to preserve the precious artworks, direct sunlight needs to be edited out and daylight levels are reduced to as low as 50 lux by a combination of external louvres and deep internal ribs. Not least, all the artificial lighting and air-conditioning extracts are housed in the void between the upper double-glazed skin and the lower glass ceiling.

In this case, the design-and-build contractor and its specialist subcontractor, Lorenzon, came to the rescue with some clever value engineering, which was tested out in a full-size mock-up at Lorenzon’s works near Venice. Hadid had designed the downstand ribs in precast concrete to match the insitu concrete walls, but Italian Costruzioni suggested making the ribs out of steel trusses clad in slender glass-reinforced-cement panels to the same profile and surface finish.

To Anja Simons of Hadid’s project team in Rome, the changes to the ribs bring several benefits. “It is easier to make a curved form using the metal framed ribs than prestressed concrete. They can hide all the technology of uplighters and roller blinds inside the hollow beams. They also reduce the load, so the depth of the supporting cross beams can be reduced from 2,200mm to 900mm.”

Other design changes carried out over the nine years of the project were less benign.

In 2003, Rome was statutorily designated as a seismic area and this required the building’s structure to be redesigned, amounting to a full 1,200 drawings. As a result, several sets of hydraulic pistons linked to movement joints have been incorporated into the concrete walls and floors. Even here, though, the architectural team had its say. They condemned the 5mm movement joints designed by Studio SPC and demanded less conspicuous 3mm joints.

Now, nine years into the project and with some £20m already spent, progress looks more secure. After the demise of Silvio Berlusconi’s government last year, its successor, under Romano Prodi, came up with another £30m to cover the unavoidable cost inflation on extended building contracts.

As Hadid’s Gianluca Racana says: “We’ve been through all this trouble, but it has a happy ending.”

A prime national cultural building design chosen through an international design competition might suggest an iconic object like Frank Gehry’s Bilbao Guggenheim. Zaha Hadid’s competition-winning design for MAXXI, by contrast, is what she describes as “a more pliable and porous organism”.

It is no more than three storeys high and blends into the city fabric. More than that, it is largely hidden from the street behind a converted 19th-century barrack building, as city planners wanted to preserve the military character of the Flaminio district that stretches back to ancient Roman times.

A more functional reason for Hadid’s low-profile design is that the building is conceived as a series of linear gallery spaces of constant 15m width and free of columns. Such gallery spaces are flexible enough to allow any internal arrangement of art objects and dividing screens, as the museum is only now acquiring its permanent collection. The galleries are sinuous in plan and trough-shaped in section, with the walls and floor slabs in solid concrete and the roof glazed to provide daylighting.

These troughs, arranged over three floors, wind around the existing buildings and intertwine like snakes. They vault over huge gaps to add drama, leaving a three-storey skylit atrium at their centre. Visitors are intended to “drift” through the elongated gallery troughs, with the option of switching routes where they intersect.