Will the surge in demand lead to a permanent shift towards modern methods of construction? 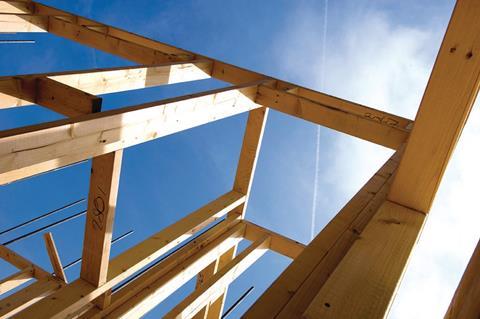 Much has been made in recent months about the rising cost of bricks. With the economy taking a turn for the better and housebuilding - supported massively by the government’s Help to Buy scheme - looking particularly rosy, demand has risen far quicker than manufacturers’ capacity to increase supply. Thus the most basic laws of economics conspire to push brick prices to an all-time high.
What’s more, housebuilders don’t just need bricks - they also need people to lay them. And here again the laws of supply and demand are working against housebuilders. According to one senior executive, the day rate demanded by brickies, at least in London, has almost doubled in the last three months from £140 to £240.

So what to do? The choice is clear cut. Housebuilders must either stop expanding, absorb the extra costs and take a hit on their profit margins, or they must seek alternative materials and construction techniques. And evidence is emerging they are increasingly plumping for this last option.

“For years the industry tried to push modern methods of construction and it never really took off because it required a different approach and at the time the housebuilders didn’t need a different approach,” says Richard Jones, a partner at consultancy EC Harris. “They were doing okay the way things were. I think that for the first time what you could see is modern methods of construction being pushed because there is no alternative.”

So, what impact is the trend having on companies that specialise in modern methods of construction (MMC)? And just how lasting will that change turn out to be?

Anecdotally, industry analysts say that many housebuilders, while continuing to express a clear preference for bricks and mortar, are starting to look at alternatives such as timber or steel frame. Such alternatives may ultimately involve higher maintenance costs, but are generally much quicker and, crucially in the current market, do not suffer a supply-side problem.

John Anderson, chairman of Berkeley Urban Developments, is typical in his assessment. “Brick is still the ideal product because it reduces maintenance costs and service charges - it has longevity,” he says. “But we are looking at system building and all products. As a group we are definitely looking at other opportunities [because of the high cost of bricks and mortar].”

Certainly, the timber frame sector thinks that it has spied an opportunity. Trade body the Structural Timber Association (STA) - formally known as the UK Timber Frame Association - is in the midst of a charm offensive, organising a series of factory and site tours for Home Builders Federation and National House Building Council members. It says timber frame accounts for around 18% of new homes in England and Wales (it is significantly higher in Scotland) and believes that the time is right to increase the sector’s market share.

The STA’s stance is supported by its members’ day to day experience. Gerard Lockey, co-founder of specialist contractor Regal Carpentry, for instance, says that he has seen an increase in enquiries over the last few months, especially from developers of larger housing schemes. Similarly, Alex Goodfellow, group managing director for timber systems UK at Stewart Milne Timber Systems, says the number of quotes he put together was 50% up against a 24-month rolling average in August and 30% up in September. What’s more, if Goodfellow’s experience is anything to go by, the increased demand for timber goes beyond the housing sector. “It’s not just housebuilding,” he says. “It’s across social and private housing, student accommodation and budget hotels.”

Of course, the obvious question is whether the manufacturers of alternative construction materials have the capacity to pick up the slack from their brick and block competitors. The constructional timber sector itself doesn’t see this as an issue - at least not yet. “Our capacity isn’t constrained in the same ways [as brick manufacturers],” says Paul Newman, head of the STA’s technical committee. “It is easy to turn up and down the speed of production facilities. There will be a capacity constraint at some point as there is in any industry, but we’re miles off that at the moment.” Goodfellow adds: “The timber frame sector at the moment is working at about 60% capacity. We’ve got a fair bit of headroom.”

But just how sustainable is the switch away from bricks and mortar? After all, what’s to stop housebuilders deciding to return to more traditional construction methods as brick and block manufacturers increase capacity? A recent report by trade body the Construction Products Association (CPA) described the current under supply of bricks and blocks as short term, stating that there is “more than enough manufacturing capacity in the UK to cope with significant market expansion”. Indeed Mike Leonard, director of trade body Modern Masonry Alliance, says that capacity should have been addressed by the end of the year, adding that timber can suffer long lead times as much of the raw material has to be shipped from Canada.

However, the increasing price of traditional build may be a more important driver of MMC as the CPA says current rises could persist. It says rises “reflect current production costs and allow margins that will justify continued investment in UK production capacity”.

Furthermore at Stewart Milne Timber Systems, Goodfellow’s colleague Stuart Dalgarno argues that there are longer-term factors driving the change - it isn’t just the price of materials and labour. He says that MMC are less carbon intensive - something disputed by some brick and block manufacturers - and this will shape the market. “I think that there is a short-term issue in terms of the availability of blocks and bricks, but [the manufacturers] will sort that out I’d have thought,” he says. “But ultimately the carbon agenda will start to bite. And if you change now, then why would you want to change back again in 18 months’ time?”

Others go further, seeing the current trend as irreversible. Richard Ogden, director of campaign body Buildoffsite, acknowledges that he has a vested interest in promoting modern methods of construction, but says the current situation simply hastens an inevitable trend. “There will always be niche players who want to use brick and will pay the cost to deliver a brick building, and that’s fine - that’s choice,” he says. “It’s not going to be erased, but it is going to diminish. That I think is a statement of the inevitable.”

Modern methods of construction (MMC) involve a wide range of techniques and materials, but the overarching aim is minimise the amount of time required to construct a building on site.
For instance, panellised units are produced in a factory and assembled on-site to produce a three dimensional structure. Conversely, volumetric construction involves the production of three-dimensional modular units in factory conditions prior to transport to site.

Hybrid techniques combine panellised and volumetric approaches. Typically, volumetric units are used for areas such as kitchens and bathrooms, with the remainder of the building constructed using panels.
MMC systems normally involve replacing concrete block with either a timber or steel frame, or with precast concrete.