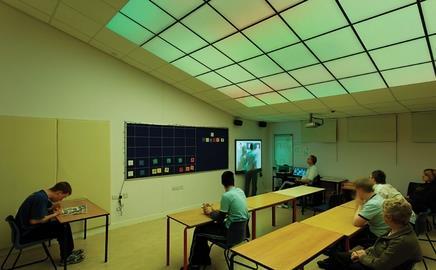 Research suggests levels of autism have increased 10-fold in the past decade, with around 90,000 children in the UK now suffering from it. The Yeoman Park School in Nottingham is one of about 7,500 autism specific education facilities in the country.

To help teachers communicate more effectively with the school's 94 pupils, a bespoke interactive lit ceiling has been developed and installed. David Fairfield, project electrical engineer with Nottingham council, and Steve Shackleton, systems manager of Zumtobel Lighting, who designed and installed the system, explain what they hope it will achieve.

What instigated the design of the ceiling?

David Fairfield It came out of the original design brief. Autistic children’s moods are affected by the lighting: for some it provides a calming effect and for others it acts as a stimulant. One of the things we are trying to do is to mimic daylight as much as possible.

Steve Shackleton It’s a first for us and, to be honest, it’s an area of experimentation. There have been a number of studies on autism and lighting. Some colours of light and the glare and flicker of conventional fluorescent fittings were shown to have a negative effect on children suffering from autism and could induce seizures. We also knew certain light levels and colours could be beneficial and that the ability to control visual stimuli within the space was important.

DF Autistic children are easily distracted and so the was designed with high level windows and to be as plain as possible. It was particularly important that the lighting installations were shadow free and the fittings and controls were out of sight as the children might focus on these.

We looked at a number of design options and finally went for a whole ceiling system, which is effectively a large light box. This approach was the most effective and gave us plenty of flexibility.

SS The aim was to create a ceiling of light to see how the pupils responded to an interactive lighting system. The design was developed with clusters of recessed luminaires incorporated into a system which provides variable lighting and colour, depending on the environment required. A total of 72 light fittings, of red, blue and green lamps, were used allowing a ceiling of thousands of colours to be created. This is linked to a control panel into which 16 scenes can be programmed. Routine is very important to autistic children, for example at home time they have a particular lighting scene that effectively gives them a routine, a signal that it is time to head home.

Were there any issues with the installation?

SS The light sources were concealed from view behind a diffuser, which is an off-the-shelf material that we have used previously but that had to be specially made for this application. We already knew what what the spacing and distance from the diffuser the luminaires had to have to prevent them from being visible and to create a uniform lighting effect. We ended up selecting T8 lamps because they are not as bright as T5 units and can be installed closer to the diffuser without being noticeable.

What was the impact of any value engineering?

SS It was a tight budget but there wasn’t really any value engineering. Every light fitting has its own DALI control system and importantly that remained intact.

What do you think of the finished result?

DF We’re very pleased with the finished ceiling. The school will provide a report on the different strategies and which ones work well. It will be interesting to see the results.

SS The project is experimental of course, but we are happy with it. Compared with conventional lighting approaches, this goes some way to making a positive impact that could have a lot of potential for communication. It could make useful research in years to come.