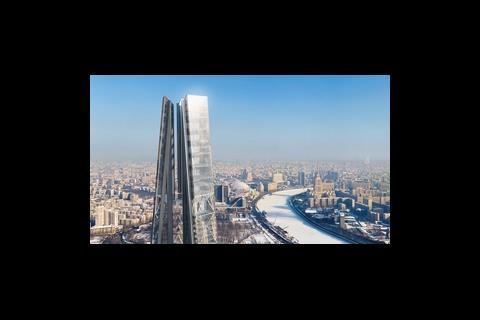 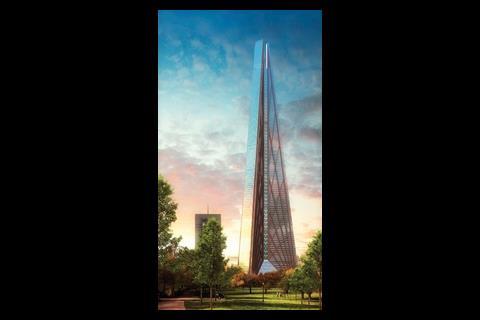 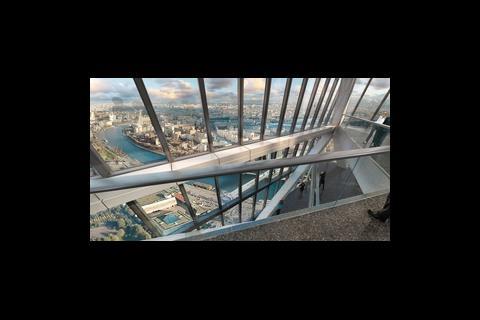 Computer visualisation of views from the observation floor on level 112 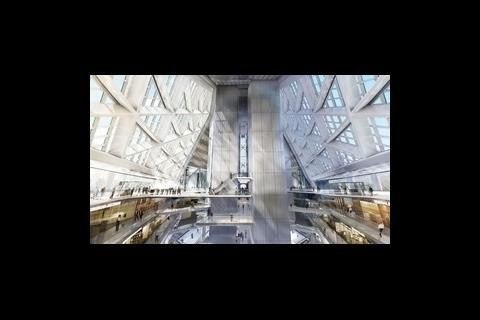 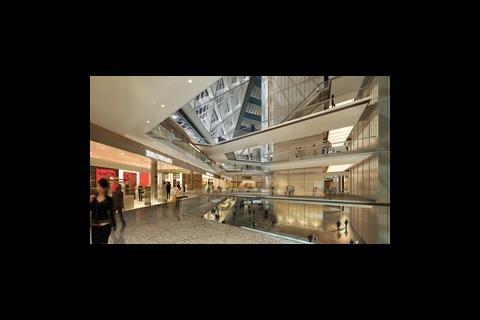 Services at Moscow City Tower will have to overcome huge extremes of climate at its base, let alone its top. Andy Pearson meets the engineer with a mountain to climb

Europe’s tallest building – and the world’s second tallest – is now on site in Russia. When complete, the tapering Moscow City Tower will soar 600m above the streets, outstripping all rivals except the Burj Dubai (predicted to reach 807m). At its summit, a public viewing deck with restaurants and bars will provide a spectacular visitor attraction, 5km west of the Kremlin. Stacked within its sloping walls will be apartments, a hotel, offices and leisure space.

Such a bold, even brash, building is being constructed at the heart of one of the world’s most dynamic economies. But what may be unexpected is that this colossus, accommodating up to 25,000 people, will be one of the most energy efficient buildings in Moscow. Waterman International, the services designer, is aiming for LEED gold accreditation – no mean feat in a country where abundant oil supplies mean the price of energy is cheap.

Given the scale of his task, David Klondar, project director for Waterman, seems remarkably relaxed as he flits between meetings on one of his flying visits from Russia to the engineer’s London office. Dressed casually in a plum-coloured shirt and chinos, he talks excitedly about the project’s environmental design. “One of the biggest technical challenges was minimising the energy demands for the second-tallest building in the world,” he says.

Unlike the Burj Dubai, the Foster-designed building is based on the structure more commonly used to support telecommunications masts. Instead of cables, three sloped reinforced concrete columns fan upwards from the base of each wing to the spine. The tower’s triangular volume is carved out on three sides to create three independent arms with narrow 23m-wide floorplates. The residential and hotel accommodation is located on the higher, smaller floorplates while the offices and retail are towards the base. At ground level, the architects have created a dramatic arrival with a downward sloped entrance opening into an inverted pyramid that will contain shops and an ice-rink. A connection to the metro system will enhance the building’s green credentials.

With such a – literally – high specification, the developer, RussianLand, expects Moscow City Tower to be one of the most prestigious addresses in the capital. The 36 floors of offices are expected to be leased by global firms looking for a landmark address, while the hotel and 39 floors of apartments will cater to the luxury market.

RussianLand required an equally high performance from the building’s services; internal conditions are to be maintained at 21ºC in winter, 23ºC in summer. The engineer’s task of designing an energy efficient, tall building while meeting strict design criteria is made all the more difficult by the Moscow climate. The city is on the same latitude as Glasgow but its land-locked location means winters are much colder and the summers hotter. Outside design criteria for the tower are -28ºC in winter, rising to 26ºC in summer.

Using weather data from buildings in North America as well as from the city’s 400m-high Ostankinskaya TV tower, the designers established that wind chill means the top of the tower will be about 7ºC colder in winter than the minimum design criteria at ground level.

The services design also has to be capable of coping with a simultaneous range of temperatures around the fully glazed facade. Klondar says the different orientations of the wings mean that in winter the services need to be able to cope with temperatures varying from -35ºC on the shaded, north-facing facades to -5ºC on the sunlit ones. “As a result of the climate, Moscow City Tower had the potential to be a huge consumer of energy rather than a pioneer of low-energy design,” Klondar says.

Waterman’s solution is to exploit the diversity of uses and energy demands between floors. “The tower is actually a vertical city; the load profiles are different for each floor type and so each will call for heating or cooling energy at different times,” Klondar explains. To take advantage of this, the designers came up with the concept of what he calls an “energy highway”, which will transfer “used energy” around the building. In practice, waste heat from the commercial and office areas will be recovered and transferred to hotel and residential floors.

Huge pipes will distribute warmth (and coolth) as required between different areas. A ring circuit in the basement will feed a second circuit serving all the floors up to the 11th-floor plantroom. From there, three energy mains will rise up the building, one in each leg, eventually reaching the cooling towers hidden in the mast’s crown. Secondary “energy pathways” will enable energy to be transferred horizontally floor by floor to pre-heat ventilation air and domestic hot water and to provide low- grade heat to underfloor systems and terminal emitters. These mains will be 600mm in diameter because of the amount of energy moved around the building. In summer, more than 600MW of heat will be rejected from the tower.

The mains will feed the basement, too. Waste heat will be piped from the 11th-floor plantroom to the basement car park to pre-heat the area’s ventilation air to above 4ºC to help to combat the extremes of a Moscow winter.

Unusually, the building has no boilers, so the building will import waste heat from an adjacent co-generation plant via Moscow’s district heating system, as well as from its own office floors. There will be two heat intakes to ensure continuity of supply, separated from the building’s energy highway by heat exchangers.

In total, there will be five plant or “technical” floors, as Klondar says they are known in Russia. These will double up as fire barriers to comply with fire codes, which specified four-hour compartments at 75m intervals throughout the height of the building. The codes have recently been rewritten; previously the standard separation was 50m.

This series of vertical plantrooms was a bonus for the services engineers. The tower’s tremendous height would have meant enormous static pressure in pipework. But the plant floors allow the engineers to install heat exchangers to break the risers into shorter lengths. This has the advantage of reducing the static head, minimising thermal expansion and contraction while at the same time minimising the riser size. The technical floors also allowed the drainage pipes to incorporate offsets to slow the velocity of pipes’ contents.

In common with many other Foster-designed buildings, Moscow City Tower has a transparent facade. This maximises daylight penetration and provides spectacular views from the double-aspect, column-free offices. All tenants are required to supply and install luminaires and lighting control systems with daylight and presence detection sensors that can interface with the landlord’s system. In an echo of Mies van der Rohe’s use of blinds on the Seagram Building in New York, specific luminaire types and their location will be dictated by the landlord so that the lighting will appear uniform from the outside.

The huge expanse of glazing makes the cladding design crucial in coping with Moscow’s extreme climate. “We were concerned about the glazing’s hot and cold radiant temperatures on thermal comfort of the occupants; the possibility of cold down-draughts from the expanse of glass in winter; and about the peak cooling loads in summer,” Klondar says.

Studies were made of everything from the facade’s U-value to the temperature gradients within rooms and even the likelihood of condensation. And, because several people are killed each year by ice falling from buildings, the designers had to pay special attention to ice build-up on the facade. The outcome of extensive research is a unitised cladding system comprising a triple-glazed, argon-filled outer unit (assembled from low-e, low-iron glazing), combined with a single-glazed inner leaf unit to form a ventilated cavity. A blind will be installed within the cavity, under the control of the building management system.

Klondar says this ventilated cavity provides a buffer zone between inside and out. Return air is drawn in through slots in the base of the cavity and extracted above the window by the ventilation system. The extract rate is 0.38m3/s/linear metre – equivalent to the fresh air supply rate to the perimeter offices of 1.4l/s per m2.

The ventilated cavity does not extend to the residential floors. These will have an openable version of the triple-glazed facade to allow occupants to enjoy fresh air in spring and autumn. However, open windows will automatically be shut by the BMS if the weather changes substantially.

More than 60 air-handling units will supply the building’s fresh air, which will be pre-cooled in summer using pipework embedded in the concrete basement walls. “We did look at borehole cooling but the fear of contaminating the Moscow aquifer ruled that out,” Klondar says. Likewise, tri-generation was ruled out because of a lack of gas and an ample supply of co-generated heat and electricity.

Electrical load will be about 37MW, provided by three 20MW, 20kV utility supplies. These enter the building at three different places to avoid a single point of failure. “A dedicated electrical network monitoring and control system ensures that the building can operate with the loss of any single supply,” Klondar says.

In the event of a total mains failure, 12 standby generators, each with an output of 2MW, will provide essential power to core areas. The output from the generators will be split equally between life-systems, lifts, ventilation plant and pumps, as well as tenants’ power requirements. Waste heat produced by the generators will be piped to the building’s summit-mounted condensers.

The electrical distribution system has been designed to exceed the IEE and ASHRAE standards for system losses. Auto transformers have been selected for the generators (10 to 20kV step-up), “because of their greater level of efficiency”, says Klondar. Packaged sub-stations will have high-efficiency, low-loss, K-rated transformers (20kV to 380/220V) to ensure they can cope with the harmonic load profiles from the office occupants and residents (many of whom are expected to install sophisticated lighting control systems and entertainment systems). There is also provision for future installation for active harmonic filters for all packaged substations.

Packaged substations are located on the service floors. These feed the 12 floors above and below each plant space via busbars, with metered feeds to tenant distribution boards. Clients who want extra power security will be able to buy a duplicate supply from an alternate substation and HV supply.

Photovoltaic cells at the top of the tower’s mast will power the building’s external lights. Some buildings in Russia have what is known as celebration lighting, which is switched on for special occasions.

Mains water will be treated and filtered to improve the quality of the drinking water supply. To enhance the building’s green credentials, grey water will be collected from the hotel and residential areas to be used for irrigation and for lavatory flushing on the commercial floors.

The groundwork contractor is already on site, constructing the pile wall that will carve Moscow City Tower’s seven floors of basement from the icy earth. It will not be long before the tallest building in Europe is luring the eyes of the city – and the world – away from the historic domes of St Basil’s Cathedral in Red Square to a 21st-century icon.