Building a medical centre is all in a day’s work for Galliford Try. But it’s a different matter when the work takes place on a volcanic island 2,000km from the nearest inhabited land. This is a prefab new-build with a difference 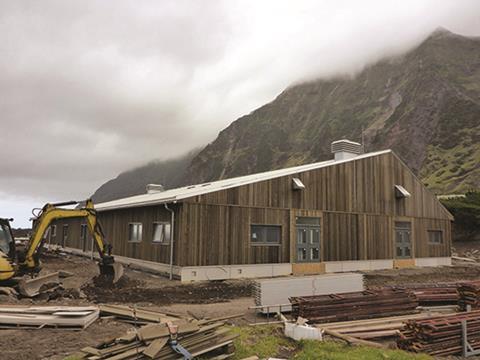 ‘You could build this medical centre easily in the UK - but it is much, much more of a challenge building it on a volcano in the middle of the south Atlantic, 10,000 miles from the nearest B&Q”. So says Mark Aimson, project manager for Galliford Try. Aimson is currently heading up the contractor’s team building the Camogli Health Centre on the island of Tristan da Cunha, in the middle of the Atlantic Ocean.

The island is a British overseas territory with about 270 permanent inhabitants, most of whom live in the island’s only settlement, Edinburgh of the Seven Seas. This settlement is also home to the island’s tiny hospital; built in 1971, the shed-like facility had reached the end of its useful life. Now, Aimson and his team of 22 are currently building a purpose-designed replacement facility on land next to the old hospital, following the relocation of Stanley Swain’s chicken coop. 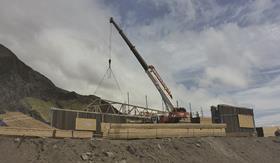 After five months, the single-storey medical centre is starting to look the part. Designed by Hugh Broughton Architects, the 45m x 25m building has walls clad in Siberian larch boards to protect them from the harsh marine environment, its asymmetric pitched roof is now covered in a skin of mill-finished, low-maintenance aluminium sheet, even the cowls for the air handling units are in place. “Externally we’ve just got the drainage left to finish, after which we’ll put in paths and the access road,” says Aimson.

Internally, too, work is progressing a pace. All the partitioning is in place; first-fix electrics have been finished, second fix is now underway; first fix plumbing is almost complete; and the vinyl floors are being installed. The project is on target for its June completion date when Aimson and the last few operatives are scheduled to sail back to Cape Town.

Getting to this point has taken the construction team two years of meticulous planning. “You turn the drawings into a procurement list for equipment, tools, plant, materials, PPE and so on because you have to start buying and containerising things at least 12 months before you get to site,” Aimson explains. It’s a routine he’s been through several times before, having undertaken similar projects for Galliford Try in the Antarctic and on the Falkland Islands. “This project is all about the logistics,” he says,

The project’s client, UK Aid, employed UK consultants to visit the site and come up with an initial proposal in 2013/14. Aimson has been involved with the project from the point at which Galliford Try tendered for the scheme: “I get involved in assessing labour input, buildability and technical issues,” he explains.

It was decided early in the design development process that the new healthcare building would be modular in construction to enable it to be flat-packed for shipping. Flat-packing the medical centre simplifies construction and maximises construction quality, both of which are critical in such a remote, exposed location.The flat-pack medical facility was manufactured by Galliford Try’s Malmö-based principal subcontractor and specialist manufacturer of pre-engineered buildings, Top Housing. “I started having meetings with Top Housing about the project back in June 2015,” says Aimson. 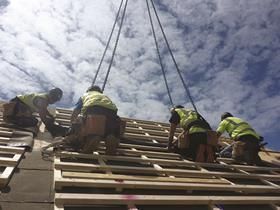 In November 2015, Aimson first visited the island; it was then that the true scale of the task that lay ahead became apparent. Even getting to the island was a challenge: it does not have a runway, so travelling meant a flight to Cape Town followed by an eight-day voyage on the island’s crayfish-factory supply ship (crayfish processing is the island’s only industry), which sails to the island once every five weeks from the mainland. “It was a 35-day round trip, but worth it because I gleaned a vast amount of information that, as a contractor, you cannot glean from the information package the client had prepared,”
he says.

Aimson could see that the island’s tiny harbour was too small for a cargo ship and that it had no quayside; when a cargo ship does arrive it anchors outside the harbour and the islanders transfer goods from boat to land on motorised pontoons. It was also apparent that an additional 20-tonne pontoon would need to be purchased in advance to assist with unloading cargo with a proposed maximum payload of 18 tonnes. On the plus side, the load capacity of the harbour crane was sufficient for his needs and the islanders agreed to act as stevedores.

The visit also allowed Aimson to establish what construction plant and equipment was available on the island and what the team would need to bring with them. The island’s excavator, dumper and mobile cement mixer could all be put to use by Galliford Try, but there was no suitable crane available so a 32-tonne mobile crane was added to the project shopping list to help erection of the prefabricated building. Even availability of fuel for the plant had to be considered: “The diesel comes from Cape Town; but in South Africa it is of a lower grade than in the UK so we had to ensure the plant we were planning to bring had an engine capable of running on this lower grade fuel,” he explains.

Utilities were another challenge. The settlement’s water supply is gravity-fed in pipes from natural ponds and storage tanks situated on the plateau at the top of the volcano, Queen Mary’s Peak, 2,000m above the hospital site. “We had to check whether the water pressure would be too high or too low for the hospital equipment,” Aimson says. There were similar issues with the electricity supply; with no gas on the island, Ovenstone, operator of the island’s crayfish processing plant, supplies the islanders with electricity from the plant’s generators. “We had to arrange to tap into this supply for a temporary feed to the construction site and for a permanent supply to the hospital”.

Less of a surprise, given that the island is effectively a volcano, is that it is subject to seismic activity, so the prefabricated building would also have to be designed to resist seismic forces.

The island’s weather was also an issue. It rains most days; annual rainfall is about 1,700mm, about twice that of Manchester. However, there is also the issue of the occasional tropical cyclone when wind speeds can reach 120mph. Temperatures are comfortable, ranging from 4°C to 26°C. “The weather is variable as you might expect when you have a 7,000 foot mountain in the middle of an ocean, it does tend to attract weather so you get all the seasons in a day,” laughs Aimson. 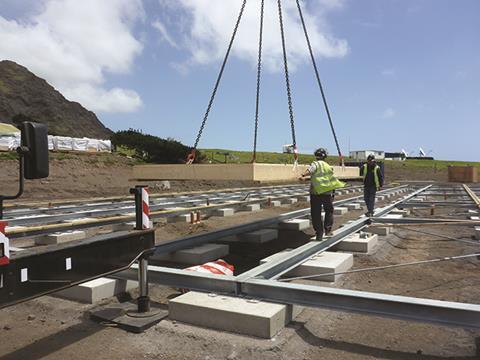 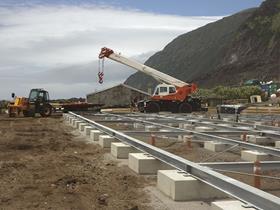 This project is all about the logistics

Working in all weathers

A year-and-a-half after his initial visit Aimson is back on Tristan da Cunha, only this this time he’s accompanied by a construction team. The initial detachment of 12 operatives arrived on the island on 28 October 2016, on the barge Pacific Askari chartered from Cape Town. For their first few weeks on the island the team had to stay in islanders’ homes because their accommodation, along with the flat-packed health centre, was still making its way to the island on the cargo vessel MV Glory. The team used this time to clear and prepare the site.

The MV Glory, meanwhile, had sailed from Malmö to Poole with the flat-packed health centre on board. In Poole, all the tools, plant (including a 32-tonne crane) and scaffolding needed to build the health centre were loaded along with materials for the external works, such as drainage and the sewage treatment tank. In all, a total of 3,500m3 of cargo was on the ship when it set out on its 10,000km voyage from Poole to Tristan da Cunha.

Frustratingly, when the ship did arrive, the weather conditions were so bad its cargo could not be off-loaded. “In theory, it should have taken five to 10 days to off-load the cargo but the ship was actually here for 53 days because they can only use the pontoons when the swell is low and the wind is from a certain direction otherwise it becomes unmanageable and dangerous,” Aimson explains. The delay meant that it was mid-December before the temporary, modular site accommodation and the team’s living quarters were assembled just a few metres from where the new healthcare centre would be built. 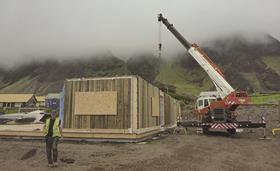 On 18 January, the initial workforce was supplemented by the arrival of another 10 operatives. With the workforce at full strength construction of the new healthcare facility gathered pace. The foundations were first to be constructed. The building is supported on a grillage of galvanised steel beams (designed to resist seismic loads) which stands on precast concrete pads (also shipped to the island). The timber floor cassettes, with services penetration holes already in place, were fitted followed by the timber cassette walls, which include pre-installed, triple-glazed windows. The walls support the timber roof trusses, which are set at 1,200mm centres. The building has two plantrooms, both of which were delivered fully fabricated and tested. 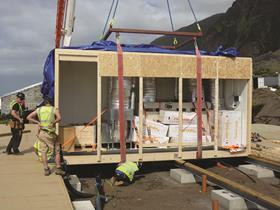 When selecting the workforce for a project where the team have to live and work together for several months, Aimson says he looks for multi-skilled workers who are tolerant of others and are not precious about their role. Tolerant because the timescale on a job like this means that all trades have to work under each others’ feet: “Its the only way you can do it without being here for 12 months,” he says. Flexible because you have to help others: “You might be lead plumber today but tomorrow you’ll be assisting the labourer putting in insulation in the roof”. And multi-skilled because the nature of a project like this requires operatives to undertake numerous tasks: “Our M&E supervisor is a qualified electrician with a detailed knowledge of plumbing and ventilation and he’s also a qualified crane driver.”

“Over many, many years we’ve built up a team we can regularly call on; we don’t recruit, they all come recommended,” says Aimson.

Medical equipment for the new facility will be a mix of equipment from the existing hospital and new equipment, which is scheduled to arrive by boat in May. The medical facility includes a fully equipped operating theatre, dentistry suites and an X-ray room so the boat’s cargo will also include two medical commissioning technicians who will have three weeks to install, commission and assist with the relocation of equipment from the existing hospital.

The arrival of the medical equipment will signal the end of the main fit-out phase. With its medical cargo off-loaded the vessel will depart for Cape Town with 10 of the site team on board. 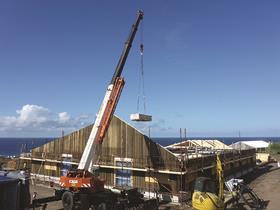 It will not be long now before the islanders take occupancy of their new healthcare centre. Aimson and the 12 remaining members of the team are set to depart the island in early June, leaving behind them a fully functioning, state-of-the-art healthcare building. But that will not be their only legacy: when they go their tools, the crane (which was bought by UK Aid for the project), and even the site accommodation will be handed over to the island’s administration for use elsewhere by this remote community.

Will he be sad to leave? “It has been a privilege to work here,” he says. 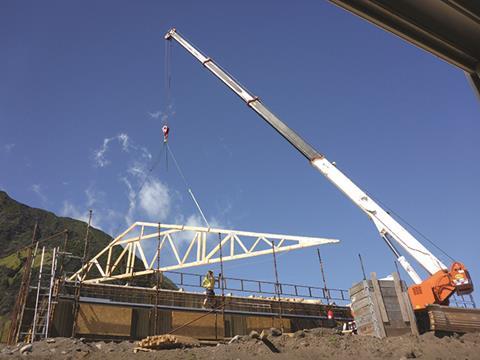