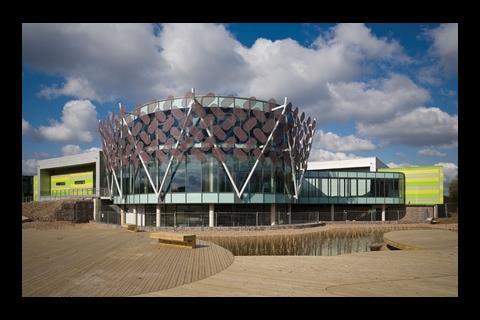 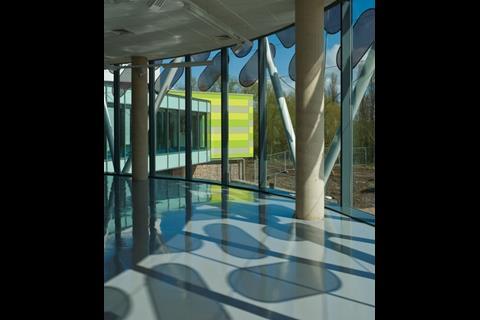 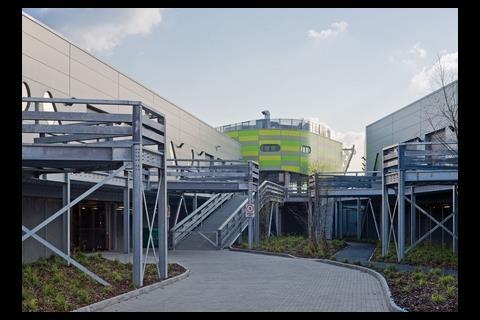 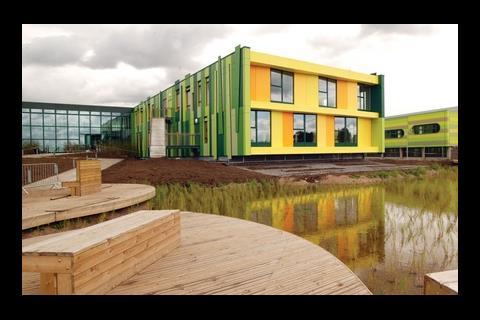 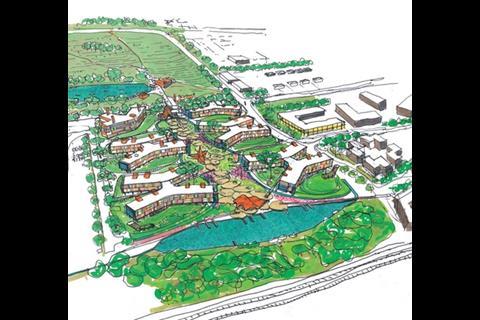 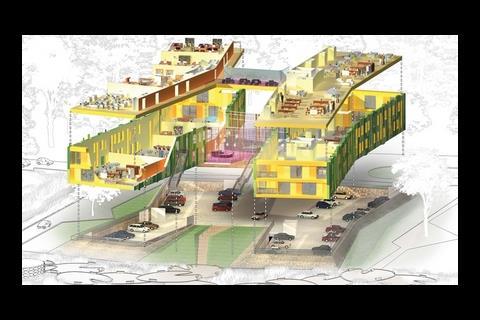 The sub-industrial grey box we normally associate with science parks is nowhere to be seen in HawkinsBrown and Studio Egret West’s park, camouflaged as it is by floating bulrushes and giant timber lily pads.

Think science and business parks and you immediately think of grey, rectangular boxes set in a sea of cars. At Nottingham’s £50m science park, south of the city centre, this predictable, earnest, sub-industrial image has been supplanted by something strikingly different. It is a fizzy concoction lime-green, pea-green and yellow stripes arranged over two irregularly shaped buildings. And instead of the ubiquitous cars, the two blocks overlook giant timber “lily pads”, floating among bulrushes.

All this is the result of an architectural competition won by a pair of practices working together. They are the established HawkinsBrown and the fledgling Studio Egret West, whose senior partner, Christophe Egret, designed the startling Peckham library in south London with Will Alsop. A no less vital role was played by the landscape architect, Grant Associates. And even before the competition was set up, the inspiration started with the client, Blueprint, which is made up of an innovative 50-50 PPP between developer Igloo (backed by Morley Fund Management) and English Partnerships in tandem with East Midlands Development Agency. Aiming at the high-tech and knowledge-based research companies spun off from nearby Nottingham university, Blueprint set out deliberately “to encourage creativity and innovation” in their staff.

The concept behind the masterplan for the 3.6ha site is for a series of buildings with long wings or fingers that stretch into the soft landscape surrounding them. The mock lily pads and real bulrushes of the landscaping are an apt response to a former industrial site that was so contaminated and prone to flooding that it had lain vacant for decades. Instead of capping the site with a concrete slab, Grant Associates sealed the contamination beneath a membrane and left the rest open to flooding from the nearby river. And the three-storey buildings cope with flood risk simply by lifting their skirts or, less poetically, by raising their usable areas up to the first and second floors. The ground floors are relegated to car parking, reached from the site perimeter, and this arrangement neatly reserves the unbuilt areas of the site for soft landscaping, unsullied by roads or car parks.

The attractive landscaping has also been opened to the public at large. There is no perimeter fence, and the timber lily pads link up to form a public boardwalk between the university campus and an established nature reserve. They are also furnished with hefty timber benches available to all passers-by.

A £9.2m training centre, designed by HawkinsBrown, is one of the first two completed buildings; the other is a business start-up unit by Studio Egret West. The 6,600m2 training centre specialises in car mechanics and serves as a further education college and a national training centre for Toyota.

The building has a happy knack of expressing its hard mechanical purpose, while settling softly into its wetland landscape, and it unfurls fascinatingly as you walk around it. It is fronted by a glazed drum that stretches into the bulrushes and contains the centre’s main communal spaces. The gleaming drum is enlivened on the outside by a zig-zagging frame of tubular steel and a translucent veil of floating elliptical sun baffles in grey-blue glass.

The centre’s main teaching space occupies the front half of the drum on the first floor. As it is open in plan, encircled by clear floor-to-ceiling glazing and with a polished resin floor underfoot, it has all the flash of a car showroom, and it does indeed serve this purpose from time to time. Beneath this showroom-cum-teaching space lies the college restaurant, and above it is the college library, well furnished with computer terminals.

Stretching out from the rear of the drum are two oblong wings, containing car workshops and seminar rooms above car parking. In contrast to the glazed drum, the workshop wings are rectangular and clad in horizontal stripes of lime green and yellow. A narrow gulch planted with wetland ground cover and birch trees runs between the two wings. Large open terraces project into the gulch from the enclosed workshops on either side, and their construction of hefty industrial-grade galvanized steel suits their purpose as open-air workshops.

The great thing for me is that you don’t see the cars. What you see from the windows is just nature

Just beyond the far side of the training centre and at the start of the nature reserve stands a wild wood. A paved area stretches between the glazed drum and the trees, and this serves as a relatively secluded outdoor dining terrace next to the restaurant.

Egret West’s 5,000m2 start-up unit alongside the training centre is a more basic building, albeit with clever touches. Most noticeable of these is the bright and cheery cladding in vertical stripes of dark green, mid-green, yellow, orange and cream. It has a simple H-shaped plan with splayed wings of business space on two floors above car parking. From the lily pads, none of the basement car parking is visible, because the slight slope in the ground has been exploited by bringing cars in at the rear. The offices stretch nearly the full 16m width of the wings, as the narrow corridors are tucked in at one side and windows in their internal partitions admit daylight. The central bar connecting the four wings contains the shared reception, meeting rooms and circulation spaces.

Not least, the science park is as green as it looks, making it “one of the country’s first environmentally sustainable business parks”, according to Blueprint. The reedbeds of the landscaping perform the practical function of a sustainable urban drainage system, or SUDS. The whole scheme is supported by a combined heat and power plant, powered by a wood pellet boiler. The buildings are naturally ventilated with cooling provided by evaporating water.

And the start-up unit’s cladding panels are made by Trespa out of 80% reconstituted timber. Only the green roofs have been dropped from the package, and behind the scene there’s a full complement of car parking, as demanded by letting agents.

Not that this disturbs Christophe Egret: “The great thing for me is that you don’t see the cars. What you see from the windows is just nature.”