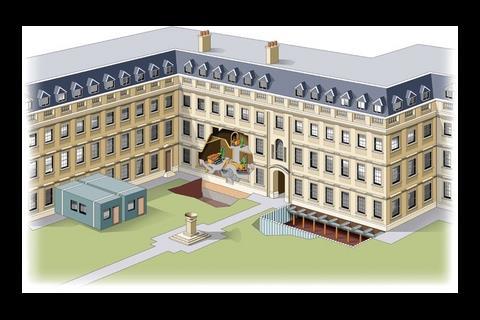 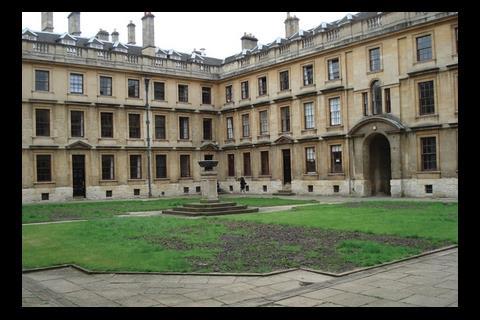 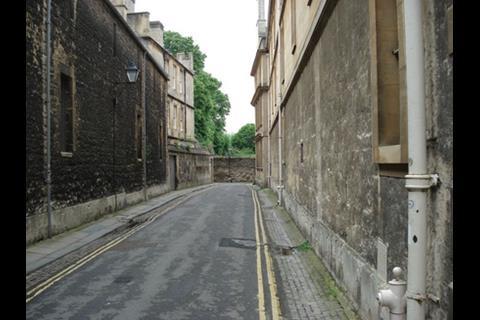 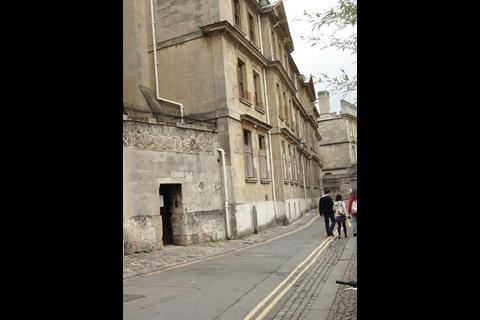 All the spoil has had to be taken through this door and into a six-yard skip. The door has been widened to allow a dumper truck access, making the job a little easier 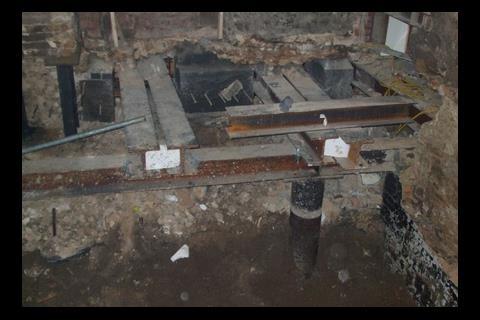 Some projects are a journey into the unknown. Take Queen’s College in Oxford. When it needed to add an extension to one of its wings there was only one way it could go: down. The aim was to expand its kitchens and create extra dining halls by digging a basement below the existing building and burrowing under the college’s quad.

Tricky as this might sound, it’s within the bounds of possibility. However, the buildings in question date from the 19th century, sit on limestone foundations of unknown stability and are Grade 1-listed. Then there was the additional complication that beneath the site were the 700-year-old limestone remains of the original college, which couldn’t be disturbed.

Figuring out a way to go beneath the structure was the first hurdle. The second was finding a way to access the site: the wing being extended was surrounded by college buildings and the only way in was a 4ft-wide doorway that was adjacent to the college chapel and opened on to a narrow lane.

All the spoil excavated from beneath the building and all the building materials to construct the kitchen and halls would need to go through this gap. And while all this was going on, the college had to stay open.

According to John Hayes, contracts manager with Beard Construction, when the contractor first looked at the project, it didn’t look as though it could be done. “The architect and engineers knew what they wanted and had thought about the temporary works, but they hadn’t thought about how we were practically going to do the job. And with a building of this age, there are a lot of unknowns.”

Essential information, such as the width of the walls, depth of the foundations, stability of the walls and what they were made of all needed to be investigated, and that was before they worried about the question of access. A lengthy period of design development followed.

“It’s tempting on a project like this to rush in and start ripping out parts of the structure, but you need to be methodical and think things through and ask whether you’ve arrived at the best approach,” says Hayes.

The project team guessed that the sequencing of work would be the key to the project’s success, but it was a chicken-and-egg situation – until the contractor started to open up the structure it would not know exactly what was there and how much of the original structure it would need to leave in place before the temporary works could be put into position and the excavation started.

Work began on site in August 2008. The ground and first-floor accommodation was stripped out to make way for the dining halls that would be built later on. It didn’t take long for the plans to change. Behind the false ceiling on the first floor, a set of stone arches was discovered.

“The conservation people saw these and wanted to keep them so the design had to be altered to incorporate them, which meant leaving the wall in place.”

At the same time it was discovered that the first floor was constructed from concrete, not timber as had been envisaged. “We think it was done in the sixties but there was no documentation of what had been done over the years,” says Hayes. The original plan had been to knock the floor out early on but it was decided to keep it intact to stiffen the building and cut down on the amount of temporary bracing that would be needed.

Work then began on breaking out the ground-floor slabs, but more temporary works were needed before excavation could begin. The most challenging of these were under the west wing, where the basement would be extended out into the quad. Here a way had to be found to support the entire four-storey elevation.

Temporary piles were driven into the ground on the inside and outside of the wall. Massive steel girders were then placed on top of specially designed pile caps to run the entire length of the wall. Once these were in place, holes were knocked through it at 1.5m intervals and steel joists or “needles” were threaded through and packed out so they were in contact with the wall. Only when this had been completed could excavation beneath the wall begin. As the contractor began digging out the existing foundations, the load of the wall transferred to the steel joists and on to the temporary piles.

The excavation required steady nerves. “You just hope it’s going to support the load,” says Steve Lambourne, Beard Construction’s project manager. Strain gauges installed along the elevation constantly checked for any movement but the team also relied on the old-fashioned method of making sure the windows and doors still opened and closed.

At the same time, work began on increasing the depth of the basement in the east wing to 3.5m. Here the concrete floor slab was broken up and the spoil dug out. As the level of the basement went below the existing foundations, the walls had to be underpinned to prevent them collapsing. The inconsistency of their construction was the big challenge here. “It’s not like brickwork,” says Lambourne. “There’s no real coursing so if you take part of it away you can find a large part of the foundation falls out. It’s a bit like a game of Jenga”.

If this weren’t tricky enough, the contractor also had to be on the lookout for any historic remains. Oxford council’s archaeological department has a watching brief: an archaeologist is always on hand in case any remains are found and they inspect/excavate before work can continue. While digging out the basement, work had to stop when a disused well was discovered.

With the excavation under way, the challenge switched to getting the spoil out from the site. So far, about 20 weeks into the 64-week programme, about 300m3 of earth and rocks have been removed. Lambourne could only get a mini excavator into the confined space and all the material had to be loaded into powered wheelbarrows, taken up to ground level and trundled through the doorway to a skip parked on the street.

The work would have been even slower if it had not been for one stroke of luck. This took the form of the gate opening from the rear quad on to Queen’s Lane. The college gave Beard permission to dismantle part of the wall around the opening – as long as each stone was numbered so that it could be put back. This gave the contractor enough access to get a dumper truck into the site. Although more could be taken out using this route, a sharp right angle bend in Queen’s Lane meant nothing larger than a six-yard skip could be brought up to the gate.

The work has been agonisingly slow; so far the job has taken the best part of 15 weeks, double the normal time. Lambourne estimates they still have to excavate another 300m3 before they are done. When this is completed, work can begin on the permanent structure to support the four-storey west wing. Two concrete transfer beams will be cast adjacent to the wall and these will pick up the load from the steel needles. Four concreted columns will then be cast to support the beams and once the load is transferred, the temporary piles will be cut down to the slab level and the remaining wall and foundations removed.

The next item on the agenda is casting the floor slabs. These have been designed to co-ordinate precisely with the kitchen, which is being built in Switzerland, and will be shipped over in sections. The stainless steel units are being built to millimetre accuracy.

“The whole layout of the kitchen is designed around the drainage and the drainage had to be designed to fit with the rebar schedules in the floor slabs,” says Lambourne. “There is no flexibility; it needs to be spot on as there is no way we can shave bits off once it arrives”.

This will mean getting materials into the site, which has been tricky from day one; even the site huts had to be brought flat-packed into the quad. Hayes’ plan is to erect a tower crane in a corner of the quad – the temporary piles have already been sunk – and to swing materials over the rooftops from the street. With chimneys, a bell tower and Hawksmoor windows to avoid on the site, it will need a deft touch from the crane operator.

It does beg the question why they didn’t use a tower crane to lift the spoil out of the site in the first place, but, says Hayes, the process would have taken too long. “It would be too slow as the weight limits at the top end of the crane would be just one cubic metre for each lift.” Now, 20 weeks into the project and despite bad weather work is on track, but there is still a long way to go.

The excavation of the existing basement on the east side will extend across into the west wing and out into the college’s back quad. The entire space will be taken up by a new kitchen including preparation rooms, chilled rooms, a pastry kitchen as well as the main kitchen. On the ground floor are the dish wash areas, main servery and the access and stairs.

A new dining hall will be created on the first floor by knocking the existing rooms into one to form one half of the dining room. Adjacent to this is an open space between the existing buildings and these will be linked with glazed curtain walling to form the other half of the dining hall. In between the new and old parts of the dining room is a Hawksmoor window; this will become a major feature of the first floor and will be restored to its former glory. As well as installing a new pantry, the team is also squeezing in a new lift, which will be housed in a fully glazed enclosure.