It was always going to be a big ask to meet the new energy performance and carbon reducing standards. But this project team seems to have found some (not too expensive) answers

Building a £2.5m office headquarters is the sort of scheme that project teams are working on across the UK. But how is the industry getting to grips with the stringent 2010 Part L? Regional engineer Walker Walker was one of the first engineers to get a building through the new regulations.

The building in question was orthodontic products manufacturer Ortho-Care’s three-storey, 25,000ft2 headquarters at Shipley, Bradford, and it is one of the first in the UK to fully comply with the latest (October) revisions of the Part L2 2010 Building Regulations.

There have been instances when our input has been sought at much later stages, at which point the cost implications can be crippling

“Early involvement is absolutely vital to achieving compliance,” explains Leeds-based consulting engineer and energy assessor Ian Walker. “There are many daunting enhancements and clarifications to the new Part L2. For example, it is now a legal requirement that a CO2 emissions calculation is completed and submitted to Building Control before even starting on site.

“There have been instances when our input has been sought at much later stages in a project, at which point the cost implications of any adjustments can be crippling. People have the impression that achieving energy efficiency will result in spiralling costs, whereas in fact it is poor planning in most cases that is to blame.”

Robert Blundell, associate architect with Robinson Design, adds: “The implications of the Part L regulations on the design process are significant but with expert advice this need not be problematic, and can in fact prove to be a catalyst for a more holistic approach when designing new buildings.”

Another problem is the CO2 target emission rate (TER), which has become much harder to achieve. The benchmark, or notional building, against which the actual CO2 emissions are established, has been upgraded. While U-values are listed as having limited settings for walls of 0.35W/m2K, the target building will now use 0.26W/m2K. Overall, this building needs to perform 30% better than one built to 2006 Part L.

This upgrading is similarly reflected throughout - fabric values, air permeability, lighting control and plant allowances - so while there is still some design flexibility, there are a greater number of considerations that have to be taken into account.

Identifying the pertinent aspects of the new Part L that might cause concern is one thing but knowing how to resolve them is another.

Early facade engineering, particularly with extensively glazed facades, is imperative as the new regulations require architects to ensure designs limit solar gain effects. The compliance benchmark assumes 1m-high, east-facing glazing with a G-value of 0.68; if there is more solar gain through the glazing the building will fail.

Previously, the effects of solar gain could be resolved by adding mechanical cooling solutions but now solar glazing and shading methods must be considered. It was decided that window overhangs on the Ortho-Care facade would be incorporated into the design to counterbalance the increased G-values from the south-easterly facing office and meeting rooms. The overhangs, or brises soleil, were chosen as they were most cost-effective and would be in keeping with the building.

Walker Walker completed comprehensive energy modelling to be able to integrate the optimum heating, ventilation and lighting solutions. Ian Walker explains: “The more accurate the readings, the greater the range of options we can provide.” As a level 5 assessor, Walker used TAS dynamic simulation software to ensure optimum compliance. The software allows hour-by-hour modelling and achieves improved CO2 emissions and energy performance certification (EPC) asset ratings. Part L2 also more clearly defines EPCs with regard to who may produce the certificates, and the financial penalties for not complying.

In order to resolve the heating and ventilation complexities of the compliance requirements, each area of the Ortho-Care building has been zoned according to function - warehousing, manufacturing, offices, staff canteen and gym. A mixed mode solution was chosen, incorporating interlocking window sensors, controlled natural ventilation and high-efficiency variant refrigerant flow air conditioning to the deep plan areas of the building. Part L meant reducing the building energy rating by 6kg/CO2/m2 per annum.

As for lighting strategy, most of the building, as well as the external feature lighting, the majority of the lighting will be provided by second generation occupation controlled light emitting diode (LED) complemented by daylight and occupancy-controlled T5 LG7 fittings. These are energy efficient but exceedingly low maintenance - typically 50% of the target energy loading across a 15-year life span.

With expert advice this need not be problematic, and can in fact prove to be a catalyst for a more holistic approach ⑂

One of the problems with selecting the appropriate lighting was that the seemingly most effective solutions have not yet been thoroughly tested by manufacturers. Walker Walker was keen on LED LG7 fittings but found they are still expensive and urge manufacturers to find a way to reduce their costs while providing sufficient testing. The LED lighting costs an additional £15,000, 25% more than conventional solutions and makes up the bulk of the additional costs of complying with 2010 Part L over the 2006 version.

The planners were satisfied by the approach adopted by the team, so didn’t require on-site renewables. “We haven’t spent significant amounts on renewable energies as others may do,” says Walker. “We did spend additional money on LED lighting but the running cost savings, reduced power requirement and life cycle maintenance costs will achieve significantly better payback.

“Costly renewable energies may bring carbon saving benefits but so too can much more affordable solutions such as good quality lighting design.”

The key is understanding where energy is used and applying common sense. If in buildings like a Ortho-Care’s, where 50% of the energy used is lighting and only 5% is for hot water generation, it makes more sense to spend money reducing the lighting load than it does to spend more reducing hot water generation energy by adding solar panels. Walker Walker finds it always pays to spend money on efficient lighting whereas most other assessors are mechanical engineers who much prefer solutions they are more familiar with.

While many fear that these more stringent energy regulations will inevitably lead to increased build costs, Walker Walker believes that it is possible to have financially viable carbon-reducing solutions that have the best chance of achieving build ability costs. The role of the consulting engineer, it says, is not just to ensure compliance but also to keep the building within budget.

“Together we all ensured the project costs were on target - that’s one of the major benefits of closer involvement throughout, but particularly in the design stages. I really can’t stress enough that early, and knowledgeable, input is the answer to achieving compliance,” concludes Walker. 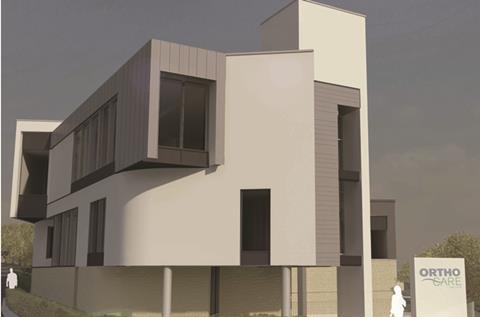