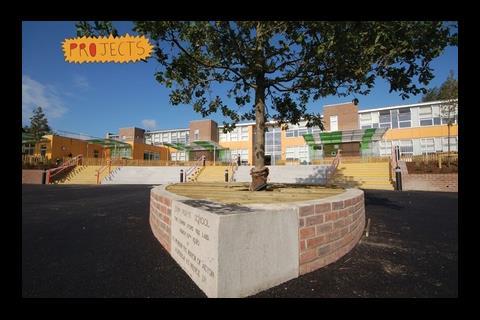 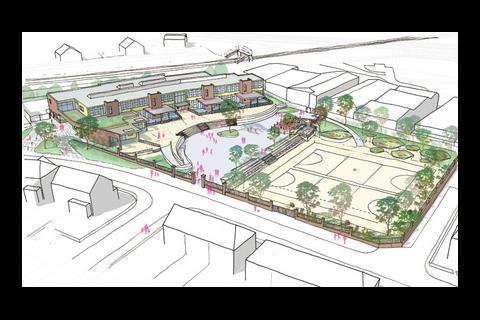 Penoyre & Prasad’s drawing of the school 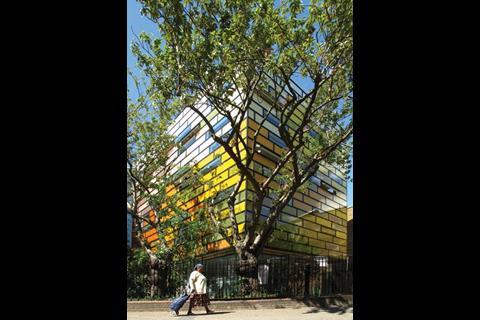 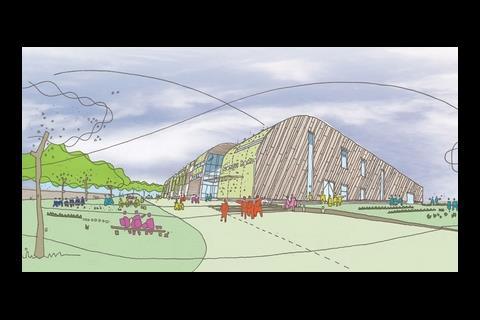 John Perryn primary in east Acton had lost the confidence of parents, staff and Ofsted. So the government stepped in to rebuild it, with a little help from Penoyre & Prasad and Willmott Dixon

In a bleak part west London, just around the corner from Wormwood Scrubs, is John Perryn primary school. Back in 2006 is was declared to be failing its pupils and faced closure if it didn’t pull its socks up. If any school needed to turn around its fortunes, it was John Perryn.

The Acton school was thrown a lifeline in November of that year when the government chose it for its pathfinder scheme. The aim was to show how failing schools could be transformed by new facilities, and the application was successful principally because the school so obviously needed them. It felt like a cramped detention camp, teachers did not tend to stay long and parents fought to get their kids educated elsewhere.

There were social factors at work as well. The school’s catchment area was had a high percentage of ethnic minorities, and about 10% of its intake was from the traveller community. This meant Ealing council was in line for a £8.4m grant to “enhance provision” for the area, which made the brief as much about providing a focus for the community as creating a modern school environment for its children.

Steve Dunham, the council’s representative in charge of the project, says building a pathfinder school was a huge challenge, but also an opportunity. “It’s a different animal to BSF. There are no exemplar designs, no established ways of doing things. We were given the chance to set a standard.”

The west entrance; the choice of red brick was dictated by cost but fitted in well with the other buildings in the area

The new school was to replace a set of thirties buildings coming to the end of their natural life. “They were absolutely dreadful,” says Von Smith, the school’s headmistress. “I don’t know how we put up with them for so long.” Steve Harnett, operations manager for Willmott Dixon, and a former pupil, says they were more like a prison than a school. “We used to joke that the school had been designed by the same bloke who did the Scrubs,” he says.

But the team had to work around these outdated facilities: the new school was to be built on a site 5m from the existing one so the children could transfer straight into it over the course of an Easter holiday.

This constraint meant that architect Penoyre & Prasad had no option but to reorientate the school on a much more attractive area of the 9,000m2 site. Rather than face the road, as the old building had, the new one sits higher up the site, facing outwards to the community. From its elevated position – the site rises 4m – the school takes advantage of views across central London. “According to the teachers, you could only see the London skyline by standing on a chair at the top of one of the old classrooms,” says Penoyre & Prasad architect Jamie Wakeford. “Now, the entire school faces that view.”

Pathfinder is a different animal to BSF. There are no exemplar designs, no established way of doing things. We were given the chance to set a standard

The school’s design is linear, with classrooms laid out on the south-facing side of a long corridor; supporting rooms such as the toilets, a double-height assembly hall and IT facilities were on the other side. Light wells puncture the corridor, allowing sunshine from skylights to reach the first floor.

Smith says the original intention was to have large, open-plan teaching spaces, but this was vetoed by the teachers at an early stage of consultation. “They all said the same thing: open-plan classrooms would alienate pupils who might not be so confident in busy environments, and as for the traveller children, we would just lose them. They would make their own smaller spaces.” Penoyre & Prasad came to a design compromise – the dividing wall between each pair of classrooms is easily demountable, so that open-plan teaching could be introduced in the future.

The materials used in the construction of John Perryn are necessarily austere, the project team having less than £9m to play with, but they lend an air of solidity to the school. Red brick, common in the area, is used on the roadside entrance and intermittently on the school’s south-facing facade. In between are ochre laminate panels that give a warm feel to the exterior. On the inside, the odd surface and door is painted in a similar dull orange shade, but the walls and corridors are mainly white, giving it a cool, calm feel.

The school is organised along an internal “street”

The outdoor spaces follow through on the theme of flexibility and multiple function. Classrooms on the ground floor each have their own, fenced-off outside area, shaded by free-standing screens. Smith adds that these areas are also an easy place for parents to pick up their children. “Having them all in one area is a blessing,” she says. “If you’ve ever tried to make 30 five year olds stay in one place at the same time, you’ll know what an advantage that is.”

The landscaped areas are as much a part of the school as the building. The disabled ramp is a long, curved pathway that swings down to the tarmac yard, and will no doubt be as much a place for children to play as an access route. In the centre of the tarmac is a 1m-high “island” made of brick with timber flooring and an oak tree in the centre of it. Smith says this came from an idea by the children, who wanted an outdoor “stage” for theatre and music projects. Elsewhere there are outdoor teaching and play areas.

The new John Perryn may have fun aspects, but it takes care not to patronise its users. Smith puts it best: “The children gave it the biggest compliment when they saw it. They said, it’s just like a high school.” Wakeford picks up on this. “If we’d wanted to build a warren of one-storey buildings, like some primary schools, we wouldn’t have been as successful. Kids don’t need distractions at every corner. It has playful bits, but we wanted to make this a building for everyone.”

With its community facilities at the building’s roadside entrance and open-faced orientation, there is no doubt that John Perryn is a huge improvement on the previous school, and a centre of aspiration for both the community and the children. But what can be taken from it to apply to other primary school projects?

There is a better chance of success if everyone is in from the beginning. It was a tight programme, but there was faith in the project team

John Perryn was procured through Ealing’s existing framework and won by Willmott Dixon at the concept design stage, before being built using the two-stage design-and-build route. Harnett says the way the project was set up, with the team brought together from the early stage of design, was a factor in its success. “There is a better chance of being successful if everyone is in from the beginning. It was a tight programme, but there was faith in the project team.”

The colourful interiors replace a building that resembled a detention camp

Dunham adds that early integration with the end users also made a difference. “Right from day one, Von and the children were kept informed and encouraged to interact with the building. It’s so important to get that sense of ownership.” Smith agrees. “You need to engage the whole of the school community,” she says. “People need to feel involved in their school and feel pride in it.”

But pathfinder schools are chosen for funding because they are unique projects. Even Harnett says it is difficult to see how the lessons learned at John Perryn will apply on Willmott Dixon’s next primary school job. “Could you build John Perryn again in Haringey, for example? No.

Every job is different, but you learn as you go along.”

Learning is an appropriate point to leave John Perryn. Since the pupils moved in last April, the school has been taken off special measures, and only one teacher left during the last summer holidays, compared with the four or five in previous years. The number of pupils has risen to 420 from 350 in April last year, and full capacity of 470 is likely to be reached next year. “We’re over the moon,” says Smith. “We’ve already had people from Buckinghamshire and Essex councils in to see it. I say to them, if every school you build goes as well as this one did, you’ll be lucky.”

Three of the best

1 Sussex Road Primary School
Architect East’s £1.4m extension to the Sussex Road Primary School in Kent came about through the work of the Sorrell Foundation, a charity set up to inspire young people through design. The department for schools and the local authorities put together the funding. The architect worked closely with the school’s pupils to create an extension they call the Box of Tricks, a two-storey cube clad in larch, but the brief expanded to include six classrooms as well as outdoor spaces.

3 New North Road School
New North Road is another pathfinder primary, now in the finishing stages of construction in Darlington, County Durham. The design, by Atkins, is intended to be as environmentally advanced as possible, with sedum roofs, a timber frame and a biomass boiler all specified to help the building achieve a BREEAM “excellent” rating. The £6.5m building has been procured under a traditional contract, with the architects chosen less than 24 hours after submitting their tender. Makes a difference from BSF, doesn’t it?