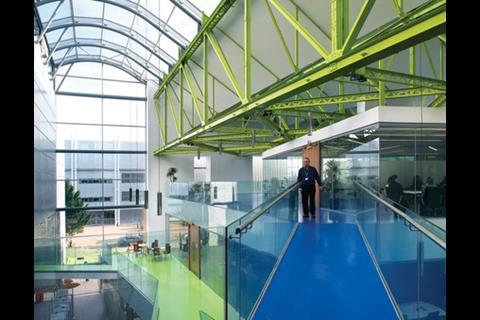 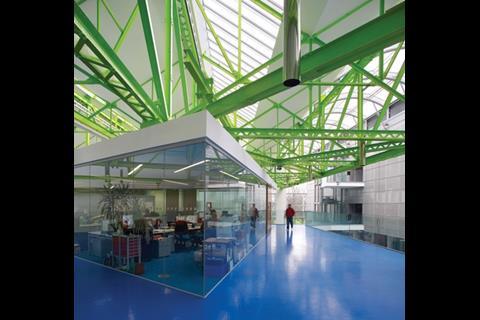 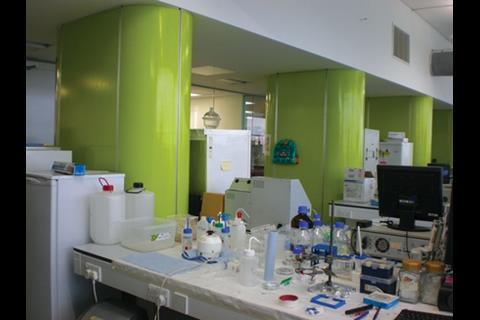 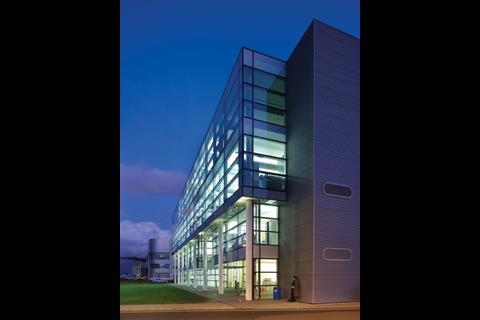 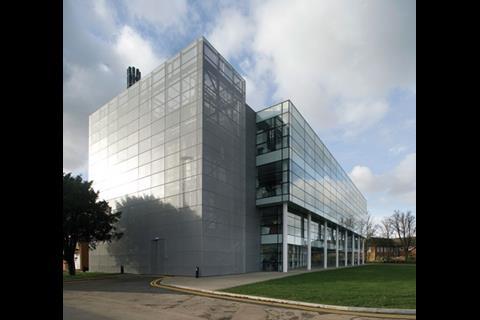 If you take a pre-war aircraft hangar, insert a large ziggurat and extend it with a glass tetrahedron, what does that create? The answer is Sheppard Robson’s spectacular academic building for Cranfield university.

What every university craves is a campus distinctive enough to beguile prospective students. For Cranfield university in the Bedfordshire countryside, the unique selling point is that it has a fully operational international airport. In fact, the postgraduate university for aeronautics and advanced technology grew directly out of an RAF aerodrome that in 1940 played its part in the Battle of Britain.

Not that this dashing aeronautical history is expressed in its built forms. The campus looks more like a collection of dumpy brick job centres, and even the three huge hangars left by the air force are just rectangular boxes clad in brown brickwork.

There are two exceptions. The first is a digital library, built in 1992, for which Foster + Partners created a modern temple to learning with glazed walls and four delicate steel roof vaults thrusting out over a front colonnade. The second is a new four-storey laboratory block facing the library, designed by Sheppard Robson, which is also glazed, contemporary and elegantly detailed to match.

But the real excitement unfolds behind the lab block, which turns out to be a front extension to one of the three hangars. Here much of the original hangar interior has been scooped out and reconfigured as an angular polygonal three-storey structure, which Sheppard Robson calls “a ziggurat”.

This unexpected building-within-a-building, together with the hall enclosing it, are as funky and vibrant as they come. The ziggurat has been set back from the rectangular lab block beyond a light and airy atrium, which stretches through the full width and height of the building and is encased around the top and both sides in clear glazing. The atrium is served by a cafe at one end and is one of the few meeting places in the campus.

The ziggurat is likewise sheathed in clear-glazed partition walls but set at a slight angle on plan to the rectangular lab block. And where its two upper storeys step back, their glazed perimeter walls are both set at different angles again.

As Graham Anthony, Sheppard Robson’s design director, explains: “All three floors in the ziggurat change in layout so that daylight reaches down into them from every side.” This irregular configuration also delivers open terraces on the first and second floors and a more secluded pocket atrium at the back. The two upper floors of the ziggurat house the university’s administrative offices, and the terraces and pocket atrium serve as airy break-out spaces for office staff.

The angular ziggurat stretches across the atrium in the form of two slender footbridges leading obliquely to the lab block at the front. But the real eye-catcher here is the assemblage of open steel trusses holding up the roof directly above it. None of your sleek, architect-honed modern structures here. This is the raw, functional engineering of the pre-war hangar – an intricate 3D web of solid beams, open-web beams and slender ties. The whizzy geometry is prominently displayed by large northlights newly inserted into the original sawtooth roof. And its paint finish in fizzy lime-green accentuates the effect.

Over on the other side of the atrium, the laboratory extension is conventionally rectilinear. Fortunately, it is lifted by the key technical feature of any laboratory, the supply of specialist and often noxious gases and liquids, and the air-conditioning they require. These have been ingeniously deployed to architectural as well as practical effect.

Rather than being lost on the roof, the chillers and other services plant are stacked up one side of the extension. From here, all the supply pipes and ducts run horizontally along the wall of the atrium before feeding through it into the labs. But on their way through, the pipes and ducts are housed in a wide services corridor so that they can be maintained and replaced without disrupting the research going on inside the labs. What’s more, the external services stack and the internal services corridors have been clad in perforated aluminium panels, which offer veiled views of their services contents as well as presenting a stylish polka-dotted surface in themselves.

Inside the two laboratory floors, the services pipes and ducts drop down from the ceiling to the lab benches in attractive risers with curved ends and a shiny lime-green finish. Looking high tech, these services risers are made of nothing more sophisticated than lacquered mdf panels that can be simply unclipped for access.

Finally, the ground floor of both the ziggurat and the new extension are devoted to general teaching spaces accessible to all university departments. These include a raked 200-seat auditorium tucked beneath the offices at the back, where the heightened headroom was achieved by excavating 1.5m into the ground below.

Perhaps the only out-of-place element in the whole conversion concerns the break-out terraces to the offices. On either side, the hangar’s perimeter windows have been replaced, but in obscure Reglit panels to match the originals retained in the rest of the hangar. As a result, the offices and terraces, although pleasantly bathed in daylight through the rooflights, have been needlessly deprived of external views.

Aside from that, what was once a dumb warehouse for aircraft now throbs as a hothouse of intellectual activity, and Sheppard Robson has given this radical £11m transformation all the imagination and flair it calls for. A transformation that offers students and staff a rare splash of excitement – and gives Foster + Partners’ library a suitable neighbour.