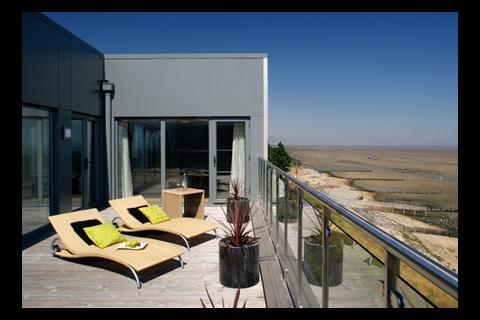 Contemporary styling and nautical wooden cladding won the planners over 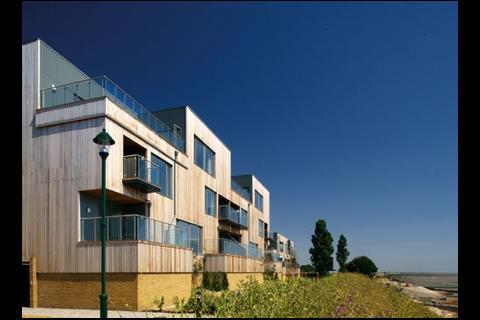 Anyone in doubt about the value of eavesdropping should read this tale of how an overheard remark at a lunch led to a close working relationship between Gladedale Homes and HawkinsBrown.

When Gladedale Homes bought 167 acres of waterfront land on the Thames estuary at Shoeburyness, it immediately turned to HawkinsBrown to design its housing development. They had met at a National House-Building Council (NHBC) lunch attended by Wayne Glaze, HawkinsBrown’s director and Ian Curry, Gladedale’s technical director. Glaze overheard Curry talking about a problem with an infill floor detail and later sent him details of a project that provided a similar solution. This led to HawkinsBrown being appointed to take the building from planning to practical completion, and ultimately to the Shoeburyness commission.

As a seasoned developer and builder, what drew you to external architectural services?

Curry At Shoeburyness, we’d reached an impasse with the planners on how to develop this site on the edge of a conservation area with sites of special scientific interest. They wanted pastiche, then went about-face to demand a contemporary approach. We turned to HawkinsBrown who came up with a nautical, timber-clad design. For us, it was a move away from our traditional roots.

Glaze I think that, thrown by the planners’ about-turn in terms of the look, Gladedale looked to us to deliver the project for them. This we did with a strong aesthetic that also provided greater densities on the site.

The solution uses anodised aluminium and timber cladding. Were there problems convincing a traditional developer?

Glaze We knew that we were not going to be looking at a pitched roof approach. We went too far by proposing a Bauder green roof, but compromised with a regular Sarnafil flat roof detail. The timber cladding was a leap of faith for Gladedale – it was firmly from the “wet trade” school.

Curry The design used completely different materials from the other traditional phases of the development, but they also used the same yellow brick for the lower levels.

The design was HawkinsBrown, but the detailing was produced in-house by Gladedale. Were there problems with that?

Curry This decision came down to cost. Once HawkinsBrown had resolved the aesthetic, we had our own team work on the detailing. On a day-to-day basis we were managing the construction process, and thought it better to deal with on-site issues.

Glaze We felt the design was robust enough to deal with this. The western red cedar would be resilient enough to cope with the exposure to the elements, and the NHBC came in to help with modifications to robust details. Simplicity and standardised components helped the process.

Any issues with the success of construction?

Curry We were worried about the cedar cladding, but we went down to Trada with the architects and developed it as a variation of robust details. We brought joiners in as specialist subcontractors.

Glaze At planning stage we were keen to hide flues and downpipes behind the cladding to keep the facade clean, but Ian was concerned about placing them within the fabric of the building, worried that this detail might affect their warranties. It also became a phasing issue, necessitating drilling into the perimeter concrete ground beam early on.

So would you do it all again?

Glaze It would have been good to have exercised fuller control of the project, but we had already earned the respect and confidence of the client for the previous project, which was technically much more demanding.

Curry I’m not sure if HawkinsBrown felt compromised, but that said, I feel we have a strong working relationship. I have always thought that if you are honest in your dealings, then it’s always reciprocated.