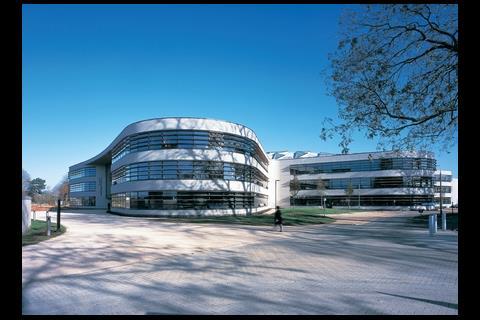 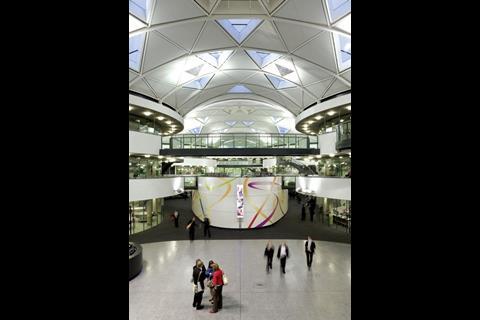 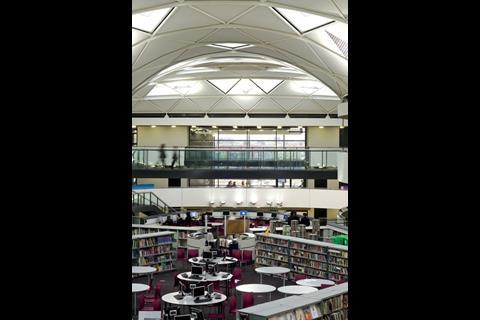 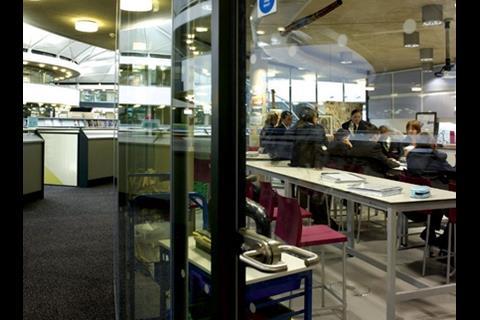 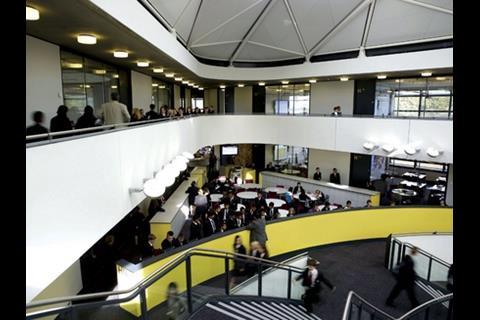 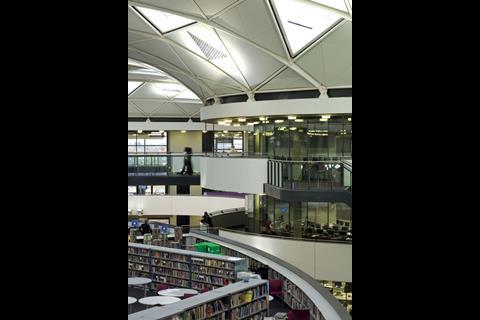 It may look like a smart new office, but the internal arrangements of Foster + Partners’ Thomas Deacon academy are yet another example of the practice’s logical and organisational rigour.

A central atrium is as common in new secondary schools these days as citizenship classes and Turkey Twizzler-free lunches. In a tight inner-city site, it is a compact and convivial device for binding together the classrooms of a large school into a single building. But, as befits one of the largest state schools in Europe, the new Thomas Deacon academy has gone one better – in fact, it has gone two better. The £46m Peterborough school, designed by Foster + Partners and opened in September, has three atriums.

But the central space is far more than that: it is a huge concourse enclosed by a three-storey strip of classrooms that curves in and out all round the perimeter. In plan, the whole building has an extraordinarily wobbly outline, like an amoeba or jelly baby. Arching over the concourse is a low-curving vault of triangular panels and skylights. And at its centre is an elliptical island with a library on its open top deck.

The reason for the vast concourse is simple. Thomas Deacon is a merger of three existing secondary schools and has to house 2,200 pupils. Even so, the concourse is neither overwhelming nor intimidating.

It is airy and suffused in daylight, and its wobbly perimeter breaks down the scale and adds a dynamic rollercoaster effect.

As the pupils and teachers move between classes, they are absorbed by an open labyrinth of access decks, staircases, footbridges and the open library deck. The effect is bustling and exhilarating rather than chaotic or crowded.

Once they have reached their destinations, it is the classrooms that steal the show. From nearly every position in the concourse, classes are visible through clear-glazed partitions.

“The key element of the school – the teaching – is upfront and in your face, and we like that,” says headteacher Alan McMurdo. “In a normal school, you have to walk along a corridor before you see a classroom.”

Beneath the wobbly form lies a well-ordered arrangement of teaching spaces. The main building resolves into six v-shaped wings, each of which forms a self-contained subject department or “college” for 340 students. The school aspires to a university system of education in which lessons are complemented by lectures, seminars and tutorials in a variety of environments.

In each wing, conventional classrooms occupy the perimeter strip where they draw natural daylight, ventilation and views. They also embrace an open study area on the first floor which shares the space, free access and bustle of the central concourse. This is intended for group tutorials and workshops, whereas a second study area is enclosed within an adjoining apex. This space, which is quieter and manned by a member of staff at a helpdesk, is better suited to pupils working on their own.

The library takes pride of place on the first floor of the central island, and below this lies the academy’s most impressive university-style facility – a pair of tiered semicircular lecture theatres partly sunk into the ground. With stages and projection screens arranged back to back, it functions as a single, dual-aspect, 360-seat lecture theatre when the dividing partition is slid back.

Sponsored by Perkins Engines, a local maker of industrial diesel engines, the academy’s specialism is maths and science.

A well-equipped laboratory is showcased next to the main entrance.

On arrival, the visitor is ushered into one bulging end of the concourse. From here, many of the classrooms, access decks and staircases are on view, as well as the concourse and its central island. At the other end, a smaller island contains a dance space with an open art studio above. Beyond the main building a boxy, nearly windowless extension contains a sports hall and auditorium. This is accessible to the local community without entry through the school. This is also the location of the school dining hall, which is acoustically and environmentally separated from the main school.

Externally, the undulating wall around the main building has been resolved into seven dark and light horizontal bands.

Although McMurdo was appointed after the school had been designed, he is delighted with the result: “We’ve got a huge school on a human scale,” he says. “There’s been a very positive reaction from staff, and the building and its quality facilities engage the students and give them self-esteem.” But he admits that there would be gridlock without the nifty timetabling that staggers the movement of people around the building.

He accepts that the school could not be extended at a later date without destroying its architectural integrity. “You wouldn’t want to extend the student capacity anyway,” he says. “The curriculum might well change. But architecturally that’s no problem as one specialist area could nibble its way into the neighbouring one along the perimeter strip.”

As for the pupils, only weeks after moving in they seem to have taken to their wobbly environment. And the building’s underlying design logic may provide them with the ideal inspiration for study.

Except for the science laboratories, the classrooms running round the perimeter of the main building are naturally ventilated.
At 8m deep, the classrooms are ventilated by automatic and manually operated windows. The exposed undersides of the concrete floor slabs act as a heat sink while the daytime build-up of heat is purged at night through the automatic top windows.
The main concourse is ventilated by a fan-assisted displacement system. Pre-heated fresh air enters floor-mounted grilles and discharges through roof vents.
The concourse derives daylight from glazed triangular roof panels. There is no artificial lighting in the roof vault as maintenance would pose access problems. Instead, spotlights on the side walls bounce artificial light off polished aluminium ceiling panels.

The classroom strip was made of insitu concrete floor slabs and columns at 7.2m centres, partly to cope with the building’s curved outline. Stair cores that straddle the perimeter strip provide lateral restraint to the outward thrust of the shallow roof vault over the central concourse.
The vault looks like a uniform diagrid of tubular-steel triangles. But structural engineer Buro Happold opted for a cheaper two-stage version, thus avoiding the need for scaffolding.
Parallel arches of steel I-beams were dropped into place, then secondary tubular-steel members were slotted to provide diagonal bracing. The tubular steel members all connect at hemispherical steel nodes drilled by specialist Spacedeck.

The academy programme was a flagship New Labour programme set up in March 2000 by then prime minister Tony Blair to replace some of the
worst-performing schools. Their successors are operationally independent but receive public funding for running costs and capital investment. Individuals and organisations are invited to sponsor an academy by contributing £2m. In addition, they lend expertise and nurture its development.

The programme has attracted some of the country’s leading architects. Foster + Partners tops the bill, with seven academies completed and two more in the pipeline.But in January 2006, the National Audit Office criticised the academy programme for the expense of its buildings, which averaged £24m apiece compared with £21m for an average public sector secondary school. In a bid to make cost savings, their procurement was folded into the BSF programme and handed over to the Partnerships for Schools (PFS) quango.

Two parallel procurement systems have been developed by PFS. Under the first, academies are procured as part of local authorities’ BSF programme by their local education partnerships (LEPs).

But where a local BSF or LEP has not yet been established, design-and-build contracts for single academy buildings are put out to tender to a national framework of six major contractors, each with approved supply chains and an architect partner. These are Balfour Beatty, Carillion, Kier, Laing O'Rourke, Skanska and Willmott Dixon.