After large areas of Peru were devastated  in the wake of 2017’s El Niño, it looked to the UK to provide expert assistance in its rebuilding efforts. 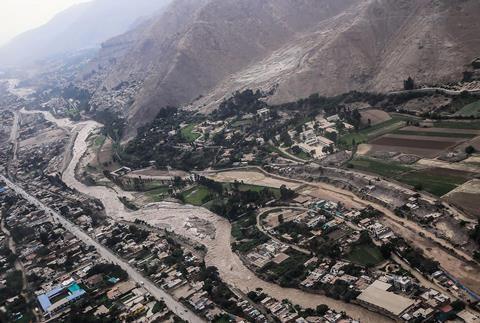 At the end of January 2017 a sudden warming of Pacific waters off the coast of Peru took place. This phenomenon, known as El Niño, occurs every few years when normal trade winds weaken and warmer waters are pushed towards the west coast of the Americas, raising temperatures by at least 0.5ºC above usual levels.

Monsoon-like rains can fall in Peru’s usually dry areas, causing mudslides called huaycos. This much the Peruvians have come to expect. But no one was prepared for what the El Niño event of 2017 unleashed.

The torrential downpours were the most destructive people had seen in decades, some said since 1925. The rainfall was 10 times the seasonal norm, causing landslides and overflowing rivers – the filthy waters destroying all crops, buildings and infrastructure in their path. The most devastated areas were the desert regions of Tumbes, Piura and Lambayeque, where a state of emergency was declared on 3 February 2017.

An estimated 1.1 million people were directly affected by the floods, with 3 million at risk for waterborne diseases. More than 115,000 homes were destroyed, leaving 178,000 people homeless. At least 113 people were killed, while more than 350 were injured. Over 2,500km of roads were destroyed while vital social infrastructure such as schools and hospitals was simply washed away.