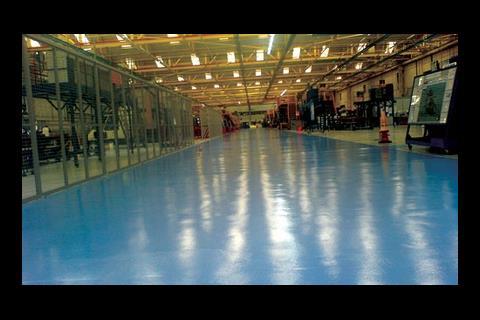 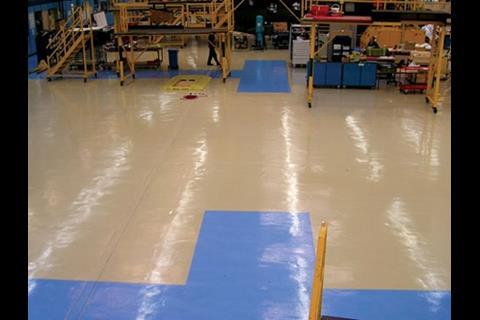 Moisture leaching into the floor at Westland Helicopters’ assembly sheds left it in need of complete refurbishment.

Protective Coatings Systems specialises in the installation of resin floors throughout the UK. The firm was founded in 1980 and is based in Chippenham in Wiltshire, where it employs six people. It specialises in the industrial flooring sector, which includes the food industry, aviation and pharmaceuticals. Daryl Hopkins, managing director, talks about a particularly challenging project.

We’re doing a lot of work in the food manufacturing industry at the moment, which is particularly bouyant. We cover both refurbishment and new build, but it is the refurbishment market that accounts for the largest slice of our work. We often get asked by architects for our opinion before they’ve done the drawings, and then we can help with the specification and give advice on things such as drainage, as we also specialise in installing stainless steel drains in factories.

Architects and clients normally come to us with an idea of what they want, but nine times out of 10 we change it as often it’s not appropriate. We also try to save them money.

At the moment we are upgrading the manufacturing site for Westland Helicopters. The biggest challenge in this project was that there was osmosis in the helicopter assembly sheds, which is a common problem in buildings that were constructed before the seventies, when damp-proof membranes became the norm.

The existing floor had been badly affected by moisture leaching into the 4mm resin surface from the underlying concrete slab. If you don’t tackle osmosis properly it just returns and pushes any new resin floor up again. At Westland we had to completely remove the old system, then shot-blast the concrete slab and cleaned it, before applying an epoxy-based damp-proof membrane. We then applied an RSL Resuscreed 43 epoxy screed and sealed it with two coats of Resutop, a solvent-free epoxy coating.

What added to the complexity of the project was that the facility was still operational when we were working there. We had to seal off the 1,500m2 bays in which we were working using scaffolding and plastic sheeting to stop any dust from getting into adjacent spaces.

What is very frustrating is when we are brought into a project at a very late stage. If there is one piece of advice I have for the design team it is not to leave the specification of the floor right to the end and to make sure there is enough budget put aside for it.

If you cut corners, putting it right later can be expensive. For example, if someone has an accident because the floor doesn’t have the right anti-slip surface on it, then it’s difficult to carry out remedial work because the facility is already operational and you will need to close down sections to do it.

The world according to…Daryl Hopkins

I swear by …
Resin flooring

My dream specification is …
A food manufacturing facility, where we have been involved from the initial decision-making stage. And preferably one where we are installing a 9mm resin floor – unlike a 6mm floor, this can be steam cleaned.

My specification nightmare …
Is a damp floor. Unless you tackle the problem of damp properly, you can end up with problems later. If the moisture comes up through the concrete slab it can push up a newly laid resin floor. In some instances clients will decide to go for a tiled floor instead.

The next big thing is …
Fast-curing resin floors. A lot of these are starting to come on the market now and they offer huge benefits in terms of the time it takes to lay a floor. There are also a lot of water-based products that have environmental benefits. Surprisingly, not many customers are asking for these yet, but this could change.