Rio 2016 interview: 'We need to be doing the same things in Brazil' 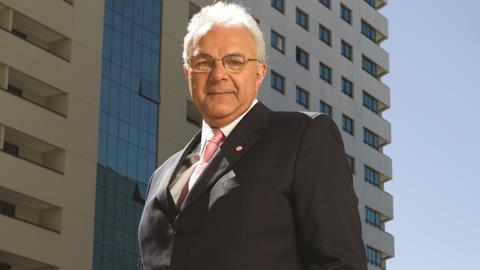 Paulo Safady Simão must have mixed feelings as he visits London in the build-up to the Olympics. As chairman of the Brazilian Construction Industry Chamber, he is one of the key players in the delivery of the next Games, to be held in Rio de Janeiro. And the way things are shaping up, the Brazilian city will have a particularly tough act to follow. The London Games have so far been acclaimed as one of the most organised Olympic deliveries in history - on time, on budget and with an exemplary sustainability strategy.

But on the other hand, Simão also realises that this can be used to Rio’s advantage - by luring the firms and professionals that built London 2012 to repeat the trick for 2016. Here he explains just how UK firms can get in on the action - which includes £182bn of public sector work and £34bn of stadium projects over the next three years. Then on pages 32-35 we take an in-depth look at where Rio has got to in preparing for the Games, and analyse whether the 2014 World Cup - also in Brazil and under fire from Fifa for being behind schedule - will ultimately help or hinder Rio’s Olympic progress.

“We are now preparing a very big show for a very, very big event,” Simão says over coffee at Ecobuild in London’s ExCel Centre, which he is attending as part of a Brazilian delegation to learn more about the UK approach to sustainable construction.

“There is a lot of pressure and this is something the UK knows a lot about … We have already started importing technicians and consultants who worked on the Olympic park in London. They have learned a lot and we now want to learn from them.”

The significance of Simão’s appeal to UK firms should not be underestimated. The country is a notoriously tough market to crack thanks to an already highly skilled construction labour force - particularly as for contractors. But now, due to the nature of the work in the pipeline - sports venues and infrastructure, as well as large-scale masterplanning - UK expertise is suddenly in demand.

The sporting events have created a “two to three year window” for UK firms to get their foot in the door, according to a report by British Expertise following a trade mission to Brazil in February. As a result of the World Cup and the Olympics, the Brazilian government aims to complete 12,265 infrastructure projects by the end of 2016, which will require an investment of $800bn in roads, rail schemes, ports and stadiums.

We like the idea of partnering as much as possible. We want to develop more relationships with UK firms

But one thing that is even more important than infrastructure credentials, is sustainability expertise. “Developing sustainable projects is so, so important for us at the moment,” says Simão. “It is a huge task for somewhere as big as Brazil. We have around 170,000 construction companies that we are asking to change the way they build, develop and look to the future in terms of sustainable design and construction.”

The answer, he says, is to create partnerships between local and UK firms to draw on the UK’s Olympics and wider sustainability expertise. This is rather than trying to use UK companies as consultants on an ad-hoc basis.

Simão explains: “I have a private project that I am working on and we partnered with Broadway Malyan. We commissioned them to do the masterplan so that the sustainability aspect was already taken into consideration at this early stage. We’re very happy with the way that worked out and we’re suggesting other Brazilian firms do the same. “This is particularly important in the lead-up to the Olympics. The UK projects and venues are fantastic and so sustainable; and we need to be doing the same things in Brazil.”

Simão adds that the UK has other elements working in its favour when it comes to entering the Brazilian market: “We are very close to the UK anyway. From government all the way down to businessmen we have good, strong relationships. We like the idea of partnering as much as possible. We want to develop more relationships with UK firms.”

Still, there’s no denying there are challenges for UK firms to overcome. “We do have some issues in Brazil,” concedes Simão. “Labour laws are very complicated and we have very convoluted tax and payment processes.”

This is why he thinks it is better from a UK perspective to partner with local firms.

“Then you get the local knowledge with the imported expertise.”

He adds that firms thinking of going to Brazil to capitalise on the Olympics should not expect too much too soon: “You have to take time building up relationships, getting to know people and businesses - particularly the developers and main contractors. You have to come here first - meet, explore, learn. That’s why we are in London and the UK so much. It works both ways.”

But should UK firms eyeing Brazilian Olympic projects be worried by the lack of progress on the 2014 World Cup? Fifa’s general secretary Jérôme Valcke said last month that Brazil needed a “kick up the backside” to speed up procedures and construction works. And days later, Fifa president Sepp Blatter added that he wanted to see “actions rather than words” from the Brazilians as infrastructure, stadiums and hotels remain behind schedule.

On this point Simão is unfazed. He freely admits that the 2014 delivery might not be “what we want to see” due to poor planning, but is convinced that 2016 will be a different story. “We have learnt and we are really investing time, money and planning into 2016. I am very happy with how things are going. This won’t be another World Cup.”

Whatever the outcome, the message to UK firms is simple: these two major sporting events are the key to winning work in a country with one of the fastest growing economies in the world. It’s time to take the London 2012 expertise global.