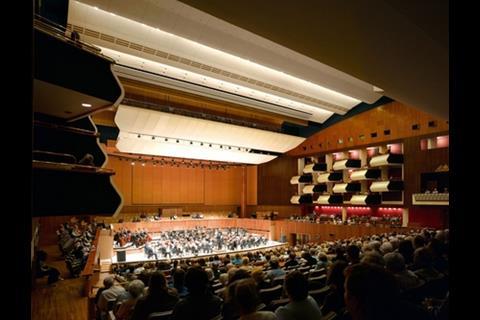 The London Philharmonic played a concert before the formal re-opening to test the acoustics. 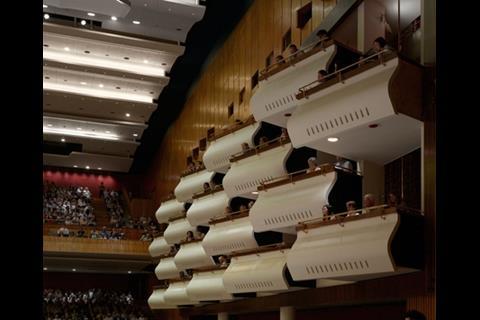 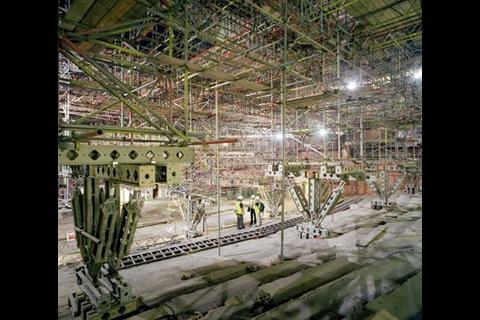 The complex scaffolding inside the auditorium stood on special legs. This enabled work to be carried out at high and low levels at the same time 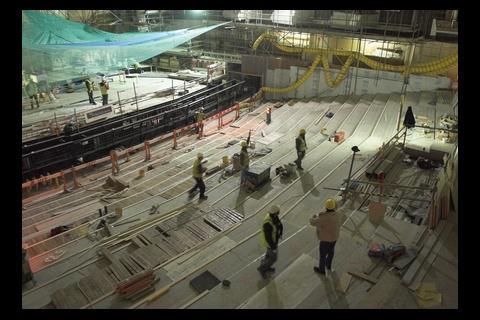 Once the scaffolding was removed, work started on reinstating the finishes including the teak flooring 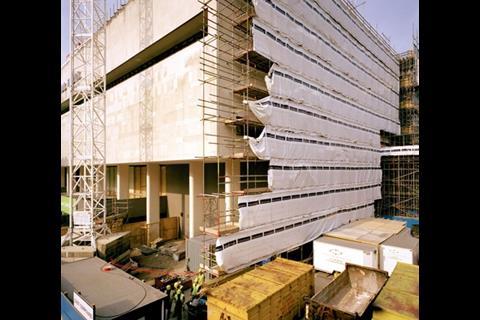 The Portland stone exterior has been cleaned and repaired 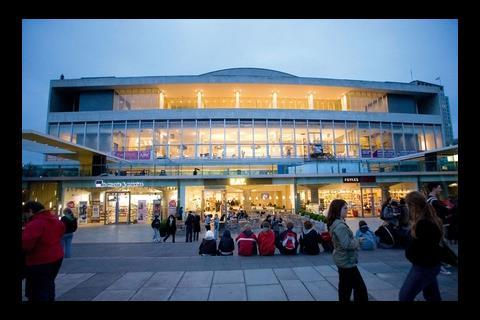 The clarity of the 1951 design was obscured by retail units. These have been moved from the foyer to a block in front of the hall 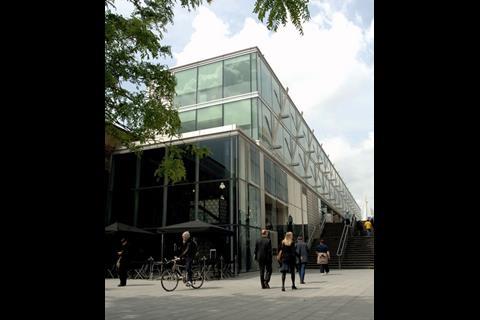 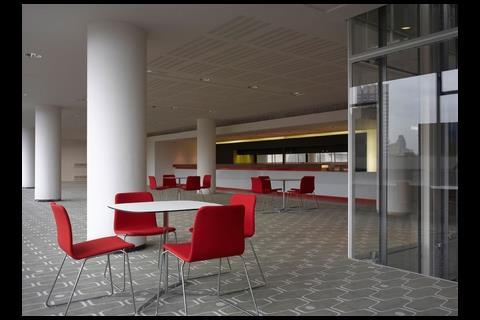 Moving the offices has created more space in the bar areas. The original net-and-ball carpet has been recreated 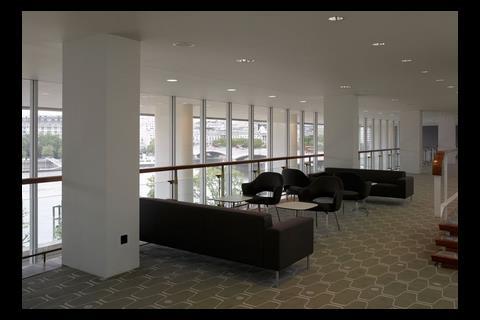 When it opened in 1951 the much-loved Royal Festival Hall was perfect in every way – save for the little matter of god-awful acoustics. Now, after a £91m, two-year refurbishment, the modernist masterpiece is rocking – and you can hear every note.

As they take their seats for the first night gala concert at the Royal Festival Hall (RFH) next week, the audience could be forgiven for wondering what difference a £91m refurbishment makes. True, the stage is slightly less cone-shaped than it was and the large canopy over the stage has been replaced by what looks like a series of aeroplane wings, but that is about it. The auditorium retains its distinctive projecting round-fronted boxes. The warm wood panelling may look fresher and cleaner, but you can still tell it was fitted in 1951 when the hall was built, and people still sit on the same Robin Day-designed seats.

Gradually, though, the differences will start to become apparent. Anybody who has lingered in the foyer will notice that it has reclaimed its clean modernist look, with the old sunken bar and retail areas gone. Then, as the first notes sound, they may detect that the acoustics have improved considerably. During the interval, they’ll find that it’s easier to get a drink in the upper bars, which have doubled in size and now offer uncluttered views over the Thames. An extra 42 toilets should make things more comfortable, too.

To achieve all these changes, the whole building was dismantled and carefully put back together over a two-year period. According to Ian Blackburn, the South Bank Centre’s project director, there were a variety of reasons for taking on such a big job.

“It’s a 60-year-old building that was beginning to look tired and it was time for work to be done on it,” he says.

“For all its strengths, the RFH had some notable acoustic weaknesses and, right from the start it was short on accommodation.”

The surfaces in the auditorium tended to absorb sound, which was fine for amplified music but not for quieter pieces such as string quartets.

But the performers got the worst deal.

“It was quite a different story from the performer’s point of view,” he says. “The stage was designed like the thin end of a megaphone. All the sound went into the audience and none was reflected back. The performers couldn’t hear each other, which made it a rather edgy, lonely experience performing here.”
The large canopy over the stage didn’t help matters either. “Because this was so heavy and dense nothing was getting through it, so no benefits were being gained from the big volume of air above the stage,” he says.

All the services were “time expired” and some of the facilities were very basic. “There wasn’t much of a lighting rig. Given the diversity of the shows, it was a miracle they could put them on,” says Blackburn.

Careful planning has been necessary to ensure that the opening night concert goes ahead as planned. “We needed a high degree of certainty over the opening date as some of the lead times for these events are notoriously long,” Blackburn says. “This is a major issue with a refurbishment where you don’t know what you are going to find.”

One big problem that the team was aware of was the presence of large quantities of asbestos. The trouble was nobody was quite sure how much was actually in the building. Stephen Wells, a director of project manager Lend Lease Projects, explains: “The building was surveyed, but this was done while it was still operating, so there was a limit to the amount of invasive work that could be done.”

The second, related challenge was that much of the work was going to take place in one large space, the auditorium. Initially it seemed that no other work could be done in the auditorium while the asbestos was being removed. Then the team came up with a clever plan. This involved splitting the hall in half with a massive platform built using scaffolding, and sealing this so work could continue on two fronts.

Getting materials into the area above the auditorium was another tricky task. The answer was to knock a hole in the southern wall of the building at high level above a flat roof. Material could be craned onto the roof then moved inside through the hole.

Before work started on the RFH, new retail units in front of the hall and an office building to the side were constructed. This meant that shops could be moved out of the foyer into the units and South Bank administrative staff could move into a new home, thus freeing up the space to create larger bar areas. Wells describes this as “in effect, an enabling project”.

The stage was like the thin end of a megaphone. The performers couldn’t hear each other, which made it a rather lonely experience

As soon as everybody was out of the building, work could get going. The job was taken on by contractor ISG InteriorExterior, which according to Wells was partially selected for its enthusiasm for the project.

“It was a significant factor as they had put a lot of thought into how they were going to do the work,” he says. It was also a special job for ISG’s project director David Levy. “I have been coming to concerts here since the sixties,” he says. “I love this building and left my old job at Skanska so I could do it.”

Once inside, all the seats, panelling, flooring and other finishes were removed. Then work started on erecting the scaffolding in the auditorium, which was supported on specially engineered legs. Asbestos removal commenced at high level, and the planks supporting the seats in the stalls were taken out. Replacements were necessary to provide a precious three inches of additional legroom.

There was a substantial amount of demolition work, too. As well as the removal of the old offices and retail units, holes were punched through the slabs to enable extra lifts to be installed to comply with the Disability Discrimination Act, and to get equipment for shows in and out more easily. “We were working on all fronts,” says Levy.

Unfortunately there was more asbestos in the building than the surveys had revealed. “We found additional asbestos which would have delayed the project by three months,” says Wells. The plan had been to get the scaffolding in the stage area out early to enable the installation of the stage lifting gear. But it was still needed for the asbestos. The solution was to cantilever the scaffolding platform over the stage from the auditorium, so that the big legs resting on the stage could be removed. “This created a clear space underneath so we could get on with the stage lifts,” says Wells. “We managed to start on the day we were supposed to.”

When the asbestos had been cleared from the area above the auditorium, the services could go in. Shoehorning these was a challenge as the ducts are larger than normal – designed to minimise noise. All the cooling to the auditorium was provided by boreholes, so fewer chillers were required.

A new auditorium ceiling, heavier and denser than the lightweight plaster original, was built to improve the acoustics. This potentially tricky job was resolved by making the wave-form ceiling surface out of lightweight glass-reinforced gypsum shells, then building up a 250mm thick layer of plaster and briquettes from above.

New winches for the lighting rigs and the acoustic wings were installed in the space over the stage. “This is where a lot of the money has been spent, although you don’t see it,” says Wells. “To me this was the difficult part of the job,” adds Levy. “The auditorium was relatively straightforward, but this had to be millimetre perfect.”

There are four lighting gantries, three of which can be moved back and forth as well as up and down. All the electric motors have to be positioned so they work in harmony. These are supported on jacks that allow for fine adjustment as the building settles.

As work progressed above the auditorium, work started on reinstating the finishes below. “It was the turning point, as you started to see it turn from a concrete shell to seeing the finishes come back,” says Wells. The original organ had been taken away and refurbished by its maker, Harrison & Harrison, and was put back, but in a smaller space to free up the stage. All the panelling has been repolished, but retains its patina.

The void behind every panel in the hall has been packed out with chipboard, plaster and heavy duty wallboard to improve the acoustics. “You then glue the whole lot together to give a really solid panel,” says Levy. The original teak flooring has been machined and reinstated, and hard flooring has replaced carpet between the seats and in the boxes, again for acoustic reasons.

Once the timber was replaced, temporary air-conditioning was needed until the main services could be switched on. “The danger was that if the timber was exposed to big temperature differences, it would have warped and split,” says Wells.

As the audience sizes up one of the most visible changes to the auditorium, the areofoils over the stage, they won’t have any idea of the connection of these to the Iraq war. The three wings can be raised up and down and tilted to fine-tune the acoustics. The wings have a material called Nomex that is stretched over a frame. This reflects high and mid-frequency notes back to the stage, but allow low frequency bass notes to pass through so they can be reflected off the ceiling. And the Iraq link? “In the early days we had a bit of a scare [procuring the material] as the Americans were buying up all the Nomex for body armour,” says Wells.

So has it all been worth it? RFH fan Levy reckons the acoustics will be a success. “Before it had a muffled, quiet sound. Now the sound pings off the surfaces so you can hear each individual note. I could tell straightaway that it was going to be beautiful.” From next week, audiences will be able to judge for themselves.

What do you think of the renovated Festival Hall? Email us at building@cmpi.biz or follow the “What you think”