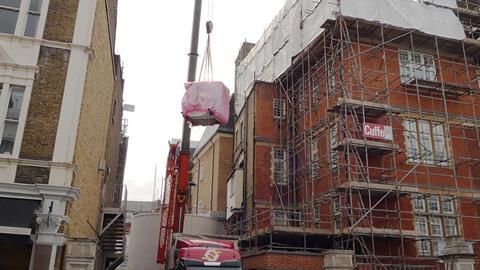 MRI scanners weigh up to 7 tonnes each. So adding an X-ray and scanning suite to the top of a Victorian hospital in a west London conservation area required some creative thinking

The Royal Marsden in London’s Chelsea is one of the world’s leading specialist cancer hospitals. And it is now poised to gain a facility that will further cement its status as the UK’s most advanced cancer care and research centre. Later this month, Tangram Architects will complete the hospital’s new MRI Scanner Suite, which is part of a wider project to upgrade all its diagnostic services including CT, PET, ultrasound and X-ray equipment.

A new MRI suite within an existing hospital may not initially appear to be a particularly radical intervention, especially considering that the hospital already has scanning equipment elsewhere on the site. But it is the location of the suite and the unique and highly complex set of technical and environmental considerations that make this project exceptional.

The suite has been built on the fourth floor of the original Victorian and Edwardian building that houses the hospital. The project necessitated the demolition of the previous fourth floor, which contained an on-call staff suite, and replacing it with a new wing that, to all intents and purposes, is an exact external replica of its predecessor. While the hospital itself is not listed, it is located in a conservation area and planners insisted on the reinstatement of the sash windows and distinctive terracotta-like brickwork that forms such an integral part of Kensington’s architectural character.

[Difficulties included] working within a crammed existing site as opposed to a new location, and ensuring the hospital remained open throughout

So the new wing has essentially been built on top of the existing hospital while the facilities below stayed in continuous use. While this presented obvious challenges during construction, as senior architect Darren Newman explains, the project was aided by one aspect of the original building. “The fourth floor itself was an extension built around 40 or 50 years ago. So there was already a concrete slab in place on which to build the new wing.”

But this slab alone was unable to support the considerable loads the new wing was expected to exert on the existing fabric. The new suite will contain two Siemens-manufactured MRI scanners called the 1.5 Tesla and the 3.0 Tesla. Each weighs up to seven tonnes and it was inconceivable that these be supported by the older structure below the new wing, particularly as some of the hospital’s foundations still retain damage from the Blitz. 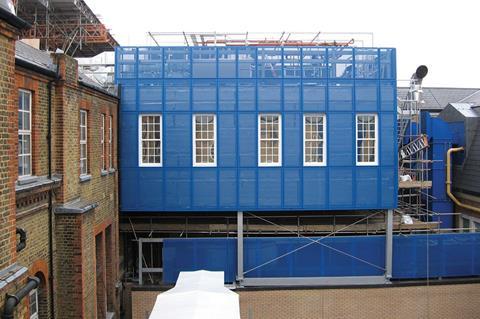 Therefore a complex ring beam system was inserted to form the primary structural support. This sits on the existing brick wall, thus enabling its load to be transferred evenly to the ground. The ring beam spans the full 18m length of the building and incorporates back-to-back 8m-long stainless steel beams spanning side to side. Newman maintains that this structural solution was specifically determined by the requirements of the hospital trust as it gives it the “flexibility to adapt the internal layout in the future and enables heavy machinery to be dropped in through roof hatches and positioned without affecting the structure”.

In order to counteract the significant loads imposed by the ring-beam steel structure and the scanners themselves, lightweight construction methods were employed to clad the new wing. This secondary steel framing system primarily includes z-purlin roof beams laid to fall, mock asphalt roof tiling, lightweight concrete and a Metsec steel frame for the external walls clad in Wonderwall brick slips. For conservation reasons, these were virtually identical to the original brickwork below.

The final major construction consideration for the project centred on the fact that MRI scanners emit incredibly powerful magnetic forces. A Gauss line refers to the extent of the magnetic field exerted by a magnetic source and, for the larger 3T scanner, this can form a radius of up to 2.6m vertically and almost 5m horizontally. Within the Gauss line, electronic and electromagnetic equipment such as pacemakers and credit cards are at risk of failure and Newman reveals there have even been instances of people being killed after been struck by unsecured objects such as oxygen tanks forcefully attracted by the magnetic pull of MRI scanners.

As a result, the steel framing system comprises non-ferrous and non-magnetic stainless steel. And the scanners have also been placed within an RF or Faraday cage. These are essentially aluminium room enclosures that block the passage of static and non-static electromagnetic fields. At the Royal Marsden the aluminium is concealed within the surrounding composite wall structure, which is then plastered and painted like a standard room. Additionally, in order to maintain its conductive integrity, all services and ductwork within the cage are housed in plastic.

Newman says that the biggest challenges of the scheme were “working within a crammed existing site as opposed to a new location, ensuring that the hospital remained open throughout construction, meeting NHS HBN [health building notes] accommodation space standards and the technical challenges of meeting the onerous magnetic and RF cage requirements demanded by the MRI scanner equipment”.

With these difficulties overcome, the project completes this month, leaving users with a state-of-the-art medical facility ingeniously embedded into a revered, historic institution. 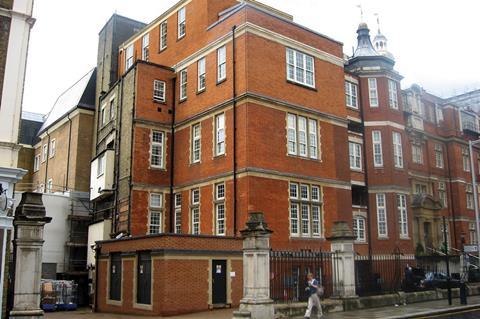 Strict planning rules dictated that after the rooftop extension is completed, the hospital retains its external appearance