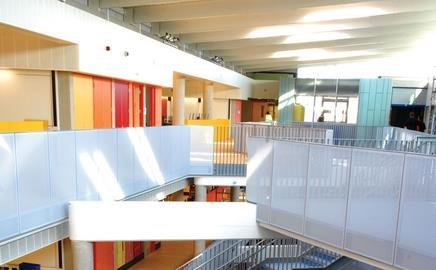 The government is producing model specifications, layouts and dimensions to speed the output of schools. But at the same time it must also avoid a return to the drab prefabs of the past.

The modular approach to school design developed by local authorities in the sixties and seventies might have died a death, but the idea that certain repetitive elements in educational buildings can be standardised still makes a lot of sense.

It is with this in mind – and spurred on by the need to keep costs down on the huge Building Schools for the Future programme – that the Department for Education and Skills (DfES) has begun producing technical guidance notes that offer standard specifications, layouts and dimensions (SSLDs) for a host of elements in school buildings.

Alan Jones, SSLDs policy leader, says the aim is to avoid reinventing the wheel each time a school is designed. “We’re offering tried and tested solutions that will speed up the design and construction process,” he says.

The guidance notes have been designed to appeal to a broad range of parties. As well as designers, contractors and suppliers, they are also pitched at teachers and governors who have taken on the role of the client, to enable them to understand the design options open to them.

In the past, standard designs were shunned by some architects who regarded the concept as a recipe for poor buildings, and so Jones says his team were anticipating some resistance from the design community.

However, rather than setting in stone how a school should look, the new guidance aims to set standards of performance for certain elements of it and demonstrate through design examples how these might be delivered. It is then up to the design team whether or not they are adopted.

“Architects seem to appreciate a steer on these levels of details,” says Jones, “but if they come up with alternatives or something better, then they are free to adopt them.”

While use of the guidance won’t be mandatory, it will become standard in the Building Schools for the Future documentation and the expectation is that it will be adopted in most situations where it is reasonable and appropriate to do so. “Ultimately, it is for the client to satisfy itself, and these guidelines will act as benchmarks of quality.”

The guidance is intended primarily for secondary schools and work on it began at the end of 2005. Which areas to target for standardisation was determined by a forum, including architects, engineers, suppliers and bodies such as the RIBA and Cabe.

Architects seem to appreciate a steer on these levels of details but if they come up with alternatives or something
better, then they are free to adopt them

To date, four sets of guidance have been published: for partitions, floor finishes, toilets and lighting.

Michàl Cohen of Walters & Cohen Architects says that for some components, standard specifications are invaluable: “There is no need to reinvent a door each time. It does speed up design and it will be interesting to see how well it works when it comes to the specification stage. But you still need to use it cleverly.”

“Types” are specified for each set of notes, alongside a breakdown of their key performance criteria. This means that when clients are compiling specifications, they can simply state, for example, a floor type A to E, or a lighting type A to G. Alternatively, they can name a particular material or fitting that meets the requirements.

Dominic Meyrick, lighting principal at Hoare Lea Lighting, says the guidance is a great help in communicating with clients. “If this type of documentation had existed when PFI schools first started out, it would have been ideal for informing the education community of the design requirements,” he states.

However, he adds that it is too lightweight to be an effective tool for engineers and lighting designers: “At 44 pages, it is a substantial document, but it lacks detail and it could also do with having more images to illustrate what they are talking about, rather than pages of dense text.”

Another bugbear, says Meyrick, is that in the lighting specifications all the luminaires come from Thorn Lighting, which was involved in compiling the guidance. “If you show it to an end user, you are already starting to look at specific products, rather than generic luminaires.”

As one of the architects that helped to draw up the toilet specifications, Walters and Cohen have a good understanding of the advantages and limitations. “It was a good research exercise,” says Cohen. “Toilets are quite contained and lend themselves to this type of treatment, but you need to know the thinking behind the specification so that you can manipulate the design to make it fit the spaces available.”

The practice is currently working with suppliers to build two bathroom prototypes based on identical designs at different schools for the same local authority. The aim is to put the theory into practice and to determine whether there are any buildability issues and if the students prefer using them. The results will be fed back into the guidance, which will be kept under review and amended to reflect updates in standards, products and ways of working.

Before Christmas, the DfES is aiming to launch four more sets of notes, on door sets, stairways, sprinklers and roof coverings. Guidance on relocateable classrooms and space dimensions is taking a little longer to develop, but is due out in the new year.

“We’re also rescoping two others [sets of guidance] at the moment,” says Jones. “One on building facades and another on M&E systems. These are proving quite complex. We’re hoping to get some feedback on the ones we’ve already published before we go ahead.”