Schools funding: adding up for politicians 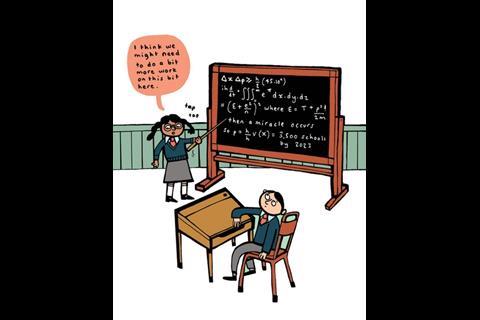 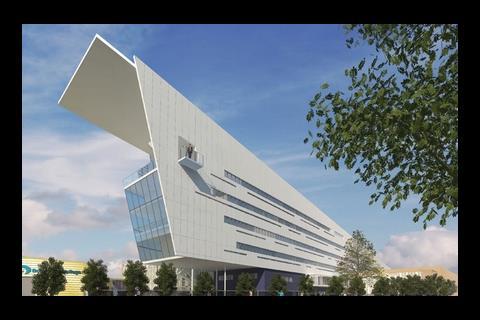 Bourneville college in Birmingham was one of just 12 further education schemes to get the go-ahead last week. Other colleges are being forced to look for new ways of funding their projects

Once the UK’s borrowing hits 12% of GDP, how much money will be available to build schools? Well, that depends on how the next government does its sums

Ask most people which subject they most detested most at school, and the answer is usually maths. The UK, it seems, has produced a nation of people terrified by the prospect of long division – a fact that might be apparent from the desperate state of our public finances.

With government borrowing set to hit £175bn by next April, the winner of the general election is going to have to get to grips with the subtraction key on its calculator – which is ominous news for the school building programme. And for the firms carrying it out – the education sector’s £6bn a year capital spend has provided a lifeline for construction firms since the recession took hold.

Both the Conservatives and Labour have been evasive on the prospects for education – an area that is traditionally protected close to an election. But a significant slowdown in spending, at the very least, seems inevitable, and schools and their supply chains are having to consider what options they have if they want to keep building. Here, we look at what funding is likely to be available, and how the scope of schools redevelopment is likely to change.

One feature of Labour’s school building programme that is likely to disappear if, as seems likely, the Conservatives win the next election, is the plethora of Whitehall-led programmes.

Labour has already taken a step towards this itself by giving responsibility for most school building to Partnerships for Schools (PfS), the delivery body for the £45bn secondary school programme Building Schools for the Future (BSF), and encouraging it to combine funding sources.

The Conservatives are expected to go further. It is understood that they favour scrapping many of the more peripheral funding pots for education, and many believe they will also slow down, and probably reduce, BSF.

James Bowyer, a partner in EC Harris, says: “I think what we’ll see are smaller, more targeted programmes. Bigger ones might be slimmed down and councils told to spend money in a more targeted manner. The general feeling is if there’s not a cut to spending, the new government will certainly slow the cash flow.”

But reductions in direct government spending may be made up in other ways. Many within construction believe the most obvious solution is to make more use of the PFI. This currently used for about 40% of procurement under BSF, and, since the government gave PfS responsibility for the bulk of other school spending, the likelihood is that other educational schemes, such as the renewal of primary schools, will be bundled with BSF projects. Nick Pollard, chief executive of Bovis Lend Lease, believes the government could do more with private finance. He says: “There’s little upfront charge. They only pay when a scheme is available and when it performs – you don’t get much better than that.”

The sum needed from the government to get a school off the ground is peanuts, but that could be reduced still further by pushing risk onto us

Pollard accepts that the PFI will add to longer term government debt, but says it could be made more attractive by passing more of the risk to construction teams. “If the government wanted to shift the cash profile further still, the industry could do it. The sum needed from the client to get the scheme off the ground is peanuts for a government, but that could be reduced still further by pushing it onto us. The real issue is the cost of commitment to assets downstream, but that’s over a timescale that a chancellor should be happy with.”

This, of course, raises issues over the availability of private sector lending. But with new funders, such as financial services group Aviva, recently entering the market for BSF, there does look to be some hope here – particularly if PFIs are structured to lessen the initial risk for the lender by making loans shorter term. Pollard believes the government could help in attracting more lenders to the market: “The government could put tension into the system, maybe with accreditation for banks that lend to social schemes at better rates.”

The other main problem with relying on PFI is that, although the government has so far resisted international moves to put PFI loans onto its balance sheet, it may not be able to do so for much longer. However, David Long, a partner in Davis Langdon, says: “My sense is they’re trying to keep elbow room for a point at which some other avenues of capital expenditure are not available.”

One model that could be employed to offset a reduction in PFI lending is debt finance that does not have a government guarantee. It is understood that some of the colleges that had their projects put on ice after the Learning and Skills Council exceeded its budget by more than 150% are considering this model (see box).

EC Harris’ Bowyer says: “There’s a lot of talk around the further education sector about ways of self-funding through some form of PFI or public–private partnership. It would need to be some sort of hybrid that could work without government PFI credits, where developers or investors could partly fund a project.”

Bowyer believes the model could be attractive to contractors with an investment arm, but there is an issue over the lack of a government guarantee, which may deter some lenders.

Schools or colleges needing to boost government cash with their own reserves have traditionally raised money from land receipts or joint ventures with developers. Because of the slump in the property market, this is less feasible now; however, some developers are still investing in schools in more innovative ways.

One example of this is the £16.4m St Thomas’ school in Kensington and Chelsea, which was completed in May after being funded by developer Places for People in partnership with the London Diocesan Board for Schools. The school had tried to get government funding for refurbishment, but was assessed at a low priority level.

The school commissioned Pollard Thomas Edward Architects to devise a scheme that involved leasing airspace above the building. Places for People developed the resulting complex using funds from the sale of 55 private homes built above it. The development also includes 14 affordable homes. Initially, there were concerns from governors about whether people in the apartments would be able to see into the playground, but screening prevents this. Entrances are also completely separate.

Tim Weightman, major projects director (London) at Places for People, believes the model could be used elsewhere. “It’s extremely cost-effective and delivers clear community benefits. The school is an important centre of the community, and we’ve been able to go way beyond the minimum guidelines set by the government for school design.

“We firmly believe that this funding model could be used on a wider basis, not only for schools but for doctors’ surgeries, libraries and other community infrastructure. We’re looking at opportunities to roll it out more widely.”

With schools likely to have to raise more of their own funding towards projects, there are likely to be changes in the way programmes are built to make the cash go further. The consensus among construction professionals is that this will mean more refurbishment and less new build. Long says: “There will be pressure to improve more schools for less money.”

The repair, maintenance and improvement (RMI) market for education stands at about £2.4bn a year according to research firm AMA, with public sector work accounting for £1.3-1.4bn, equivalent to a third of all public sector RMI spending. In a recent report, the organisation says: “Over the medium term, we anticipate that the recession may result in a slowdown in growth rates in investment levels in RMI, but overall demand will be sustained by the need for essential reactive and cyclical RMI, while planned maintenance programmes may be a necessary alternative to new build.”

One refurbishment-based model that is understood to be gathering favour within the Conservative party is the Swedish method of schools procurement, under which a donor tops up small amounts of government cash to fund independent, but non-fee-charging, schools. They are set up in existing buildings that are refurbished and subject to a continuing programme of improvements. Ty Goddard, director of the British Council for School Environments, said: “I think they will be a model for a future government. Some are wonderful.”

EC Harris’ Bowyer also believes the government will look to adopt strategic refurbishment programmes that tie in with other aspects of its political agenda. “One of the challenges for any new government, that may need to reduce its capital spend because of fiscal restraints, is to align its investment in a much more targeted way to its key policy outcomes. For instance, how could a more targeted programme of investment in catering facilities in schools be delivered to support the healthy eating agenda?” This type of improvement would also favour standardisation, which would enable component parts of schools such as kitchens and toilet blocks to be fabricated in factories.

Above all else, many within the industry are keen to stress that the need to cut public spending, even in education, does not mean that programmes to renew the school estate have to be abandoned. As Bovis Lend Lease’s Pollard puts it: “I worry that government in all its colours doesn’t understand how construction and property can be used to the advantage of a new chancellor. It’s in real danger of throwing away a massive opportunity.”

A lesson from colleges

The UK’s further education estate might be lagging behind schools in terms of renewal, but it is ahead in one respect – grappling with the issue of alternatives to government finance.

The programme to renew the UK’s colleges was derailed earlier this year when the Learning and Skills Council, which is managing the initiative, was found to have overcommitted its budget by 150%. About 144 schemes were put on hold in March, and last week just 12 of them were given the go ahead.

The remaining schemes, together with some 60 others that were preparing bids, are now trying to come up with alternative financing methods to avoid a two-years delay to their schemes.

A taskforce chaired Mark Dawe, the principal of Oaklands college in St Albans, is preparing a report on possible methods that is expected to be published within weeks. It is understood to be considering: