Solar gains and the new Part L: unless your building is a glass box it’s great news

What impact will the new limits on solar gains have on office design?

While the general idea within the industry is that Part L 2010 is going to be more onerous across the board, the good news is that the significant changes to Criterion 3, which covers the limiting effects of solar gains in summer, take a much fairer and more rational approach, which in many instances will be easier to comply with. And most importantly it removes the previous disadvantage unintentionally levied on naturally ventilated buildings. However, those designing air conditioned buildings with high levels of glazing need to beware as compliance is going to be a tougher challenge and Dynamic Simulation (DSM) might offer the only route to compliance.

The previous methods of demonstrating compliance have been scrapped and replaced by a new solar intensity test. Designers must show that aggregated solar gains between April and September do not exceed a benchmark level. In addition, no building is exempt; all regularly occupied non-transient rooms must be included regardless of whether they are air conditioned or not. This is one of the most significant changes, since air conditioned rooms were exempt from the 2006 Criterion 3 overheating test.

The effect is that the ambiguity present in the 2006 regs has been removed and replaced with a level playing field across all building types and locations. Previously, both methodologies were influenced heavily by the chosen activity and location of the building. For example, naturally ventilated office buildings with reasonably high internal gains became near impossible to comply with the 2006 requirements, forcing them to become air-conditioned spaces to gain exemption. Due to greater ambient temperatures, this applied especially to those located in the south of the UK.

The new limiting solar gains approach will not be significantly influenced by the activity or location of the space. Benchmarks are predetermined for each location; with side-lit spaces being based upon the exposed perimeter of the zone and roof-lit activities determined from the floor area.

In order to assess the implications of Criterion 3 and these new benchmarks IES undertook a case study across several different building types, with different amounts of glazing. The results confirmed our first impressions; that air-conditioned buildings with high levels of aesthetic glazing, which would previously have been exempt, are now very tough to pass. 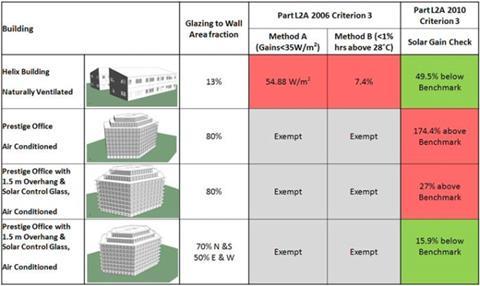 Analysis of the results
All study buildings, for analysis purposes, were located in London. The first building is a naturally ventilated office. It only has a moderate amount of glazing but due to the warm climate and high internal gains associated with the activity it fails the 2006 Criterion 3 requirements. However, under the 2010 Criterion 3 regulation it demonstrates compliance very comfortably.

On the opposite end of the scale, a heavily glazed air conditioned office without any active means of limiting solar gains fails by a significant margin. It would not have previously needed to demonstrate compliance in 2006. By adding design measures to limit solar gains such as shading devices and specifying solar control glass, the solar gain can be brought much closer to the Benchmark level.

However, it is not until the glazing levels on the key problem East and West faces is significantly reduced that compliance is achieved.
This study was undertaken using IES’ VE-DSM software, which through its link to our solar shading module SunCast allowed us to accurately take into account a wide range of passive and active solar shading measures, including self shading and surrounding buildings.

It is worth noting that SBEM cannot be called upon for this level of help, as such features cannot be included easily. As demonstrated above, when trying to achieve compliance in circumstances when such measures make the difference between a pass or not, a Dynamic Simulation (DSM) route should be considered.

What this goes to show is that while many new building will find it easier to pass the new Criterion 3 requirements, facade design for highly glazed air conditioned buildings now plays an important role in compliance and its analysis with regards to these requirements must be considered as early as possible.

To get the best results, right from the early stages of a project, designers should be aware of the holistic implications and tradeoffs design options will have with regards to natural daylight, solar gain and fabric loss. This integrated design and analysis approach is going to have a much larger role to play going forward.