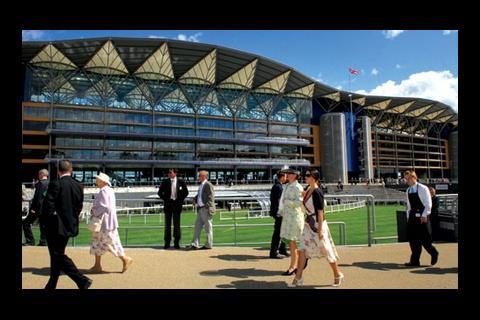 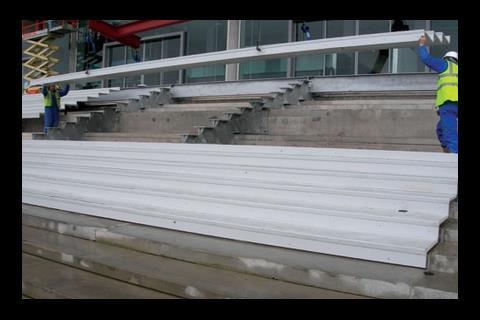 A lightweight alternative to concrete stadium terracing has arrived in the UK, via the oil rigs of Alaska. But will sports fans notice the difference underfoot? Stephen Kennett finds out

It started with a mission to find a new material with which to build the hulls of ice platforms used for drilling oil in Alaska’s Beaufort Sea. Fourteen years later, the same technology is about to revolutionise the way stadium terraces are built and could have even wider implications for the construction industry.

In 1994 the Canadian government was concerned about the damage that collisions with ice floes were causing to the traditional, stiffened-steel hulls of its rigs.

In response, Stephen Kennedy, professor of structures at Carleton University in Ontario, worked with the BASF Group to devise a solution – the sandwich plate system (SPS).

This is a composite material that includes two steel plates with a polyurethane core sandwiched between them, instead of sheets. The core starts as a liquid elastomer, which is injected into the cavity between the two layers and bonds to the steel as it sets. This means that when the system is bearing a load, the force is dispersed over a large area, which reduces the strain that could lead to cracks. It also solves the age-old problem with stiffened-steel structures – their vulnerability to fatigue at the points that aren’t immediately backed by stiffeners.

The beauty of the sandwich panel system is that it uses two well-proven materials, which means that unlike lightweight composites made of exotic materials, it can be applied to heavy engineering problems.

Over the past decade the system has been used to build and repair ships and, more recently, to construct bridges and strengthen existing ones.

Now, Intelligent Engineering – the company formed to develop and commercialise the technology – has turned its sights to the construction industry. “We started to look at what large flat forms had to carry structural loads,” says Guy Turner, Intelligent Engineering’s civil engineering director. “Obviously, floors were one and stadium terracing was another.”

An enquiry from the US about using the technology on terraces meant this product got a head start. In this situation, instead of replacing stiffened steel, the sandwich plate system takes the place of concrete.

The first project in the UK to use it was Ascot Racecourse, where 3,250m2 of the composite was laid on top of the existing structure as part of remedial works to increase the elevation of the terraces. Intelligent Engineering is currently bidding on a stadium scheme and, says Turner, they have several more in the pipeline.

Architects see this as a more elegant solution to traditional methods, structural engineers see it as one that solves dynamic problems and contractors like that it is faster.

The system used at Ascot comprised 4mm steel plates, with a 20mm elastomer core – according to Turner, the feel underfoot is indistinguishable from concrete. Thicknesses can be varied, depending on the structural performance required of the terrace.

The products are delivered to site as three or four prefabricated units and then craned into position and bolted together. Detailing for connecting balustrades, upstands and the seats – either to the treads or risers – can be incorporated at the factory, along with the slip-resistant, silica grit finish to the treads.

The main benefit of the product is its weight. It is about 75% lighter than concrete, which means the structure and, in turn, the foundations, need to support a substantially lower load than usual (see box below).

It also shortens build schedules, says Turner. “Because it is lighter, we can ship and lift three terraces for every concrete one. In a 40,000-seat stadium you’re looking at 3,000 lifts for traditional precast concrete terracing. We bolt three terraces together and lift them as a unit.” Similarly, the number of truck deliveries to site can be slashed.

Turner says the flooring system is about a year behind the terracing. The idea is for this to bolt directly to a steel building frame and offer similar advantages to the terracing in terms of weight – 36% lighter, he says – and speed of construction.

Also, where it is used to replace a traditional composite floor of concrete poured over a profiled metal deck, it does away with wet trades and means the moment it is fixed the building has its full loadbearing capacity.

The flooring product is undergoing certification at research body BRE at the moment – something the terracing system has already got. At the same time, the first project it will be used on is being designed.

However, with the swath of stadium projects being considered in the UK, Europe and the US, it is the terracing system that is stirring up the most interest. “Architects see this as a more elegant solution to traditional methods, structural engineers see it as one that solves dynamic problems and contractors like that it is faster,” says Turner.

The Olympic Games could hold the card to the product’s success. Many of the stadiums are seeking to have a permanent look and feel, which can be downsized after the Games. The sandwich plate system may be able to offer the performance typically associated with concrete structures, along with the advantage that it can be unbolted and reused elsewhere. Watch this space.