Structures in an exhibition 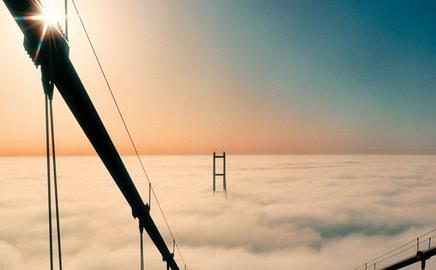 An exhibition opens this week that celebrates one of the unsung heroes of 20th century design: the structural engineer. The show, titled Unseen Hands: 100 Years of Structural Engineering, will be at the V&A museum in London until September as part of the Institution of Structural Engineers’ 100th anniversary celebrations.

The Humber bridge is the fifth-largest single-span suspension bridge in the world. Work began in 1973 and traffic first crossed the bridge on 24 June 1981. The consulting engineer for the project was Freeman Fox & Partners.

Engineering fact: The bridge is constantly moving. It bends more than 3m in the middle in winds of 80mph and the towers bend inwardly at the top.

HG Balcom of HG Balcom and Associates was responsible for the structural engineering of the Empire State building, which was the world’s tallest building from 1931 to 1972. Work began in 1930 and was completed in one year and 45 days.

Engineering fact: The building is supported by 210 steel and concrete columns, 12 of which run from the foundation to the very top.

London’s Millennium bridge by Arup was the first pedestrian bridge across the Thames for more than a century. Engineering fact: Its eight suspension cables are tensioned to pull with a force of 2,000 tonnes against the piers set into each bank – enough to support a working load of 5,000 people on the bridge at one time. The bridge’s wobble has not recurred since repairs were completed in 2002.

The Water Cube, also engineered by Arup, is the aquatics centre for this summer’s Olympics in Beijing.

Engineering fact: The structure of the Water Cube is based on the geometry of soap bubbles. This unusual solution was chosen because it proved impossible to make conventional vertical columns in the walls, and beams in the roof look neat where they met in the corners. Despite its random appearance, the soap-bubble structure is repeatable, which makes it easy to build and to make proof against earthquakes. ETFE “pillows” are fitted to the structural steel sections and, when inflated, create 3D “bubbles”.

Foster + Partners’ Millau viaduct, for which Belgian firm Greisch carried out the structural engineering, spans the valley of the River Tarn in southern France.

Engineering fact: It is the world’s longest multi-pier cable-stayed bridge, just short of 2.5km, and the highest at 343m. Seven piers step across the valley to support the deck. These piers are the highest in the world.

The exhibition is organised by the V&A, the RIBA and Institution for Structural Engineers. It is on until 7 September 2008 and admission is free. For more information go to www.vam.ac.uk