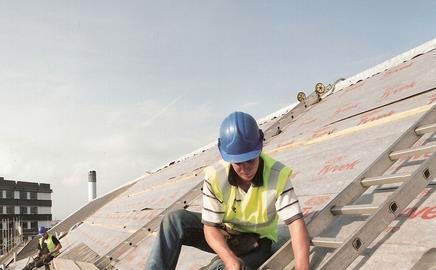 DuPont Tyvek, part of the DuPont global conglomerate, was founded in Luxembourg in 1962. Its headquarters is still in Luxembourg City. Its UK business, which has operated since the late eighties, employs more than 20 people and its main market is for breathable roof membranes. Tim Smith, the UK’s national key accounts manager, discusses its products and how it is innovating to meet changing needs.

The sheets are sold in 50m long rolls and are available in widths of 1m or 1.5m. They are laid on top of rafters and under battens and tiles, giving roofs a secondary water-shedding layer, which is a barrier to wind, dust and snow, and provides ventilation. Tyvek can be sealed to give greater energy efficiency and it can also be used in Scottish boarded roofs.

Tell us about your market

We supply everything using distributors and roofing merchants that sell on to housebuilders, roofing contractors and timber-frame contractors. We hold regular seminars for architects and other specifiers and will often help by meeting our customers if there’s a good reason to do so. But we don’t take orders directly from them.

Who are your main competitors and how do you differ from them?

Our main competitors would be Klober, Proctor and Icopal. But Supro is the only two-layer product on the market. Other breathable membranes have three layers. The working layer in Tyvek is thicker than the competition’s and adds more protection. It’s a good, strong, light product.

Which sectors and products are busy?

We’ve seen the market for timber frames growing in the wake of changes in Part L of the Building Regulations, which helps our business. The market is already strong in Scotland; now more timber frames are being built in England and Wales, too. Because we have a good, well-established brand name, we’re getting good coverage across the whole country, particularly for Supro. Our breathable membranes offer economies for heating houses as they stop cold air coming into buildings and maintain heat inside.

The Henry Barnes Wing of the Cumberland Infirmary in Carlisle was a challenge. It was built in the 1830s and is now grade II*-listed. We were involved in its second major roof re-covering. It’s exposed to harsh winds from the Irish Sea so we fitted the roof with the standard Supro product. But because the work had to be done quickly, we used the 1m wide version, which weighs less and is more convenient for this sort of work.

What products are you developing?

We’ve got a range of products and systems coming on stream under the heading DuPont Climate Systems, which we launched last year. Using our knowledge of Tyvek Reflex and Tyvek Enercor Wall, which is a reflective, low-emissivity breather membrane, we’re introducing a system for roofs called Tyvek Enercor Roof, which we hope will boost the insulation of whole building systems. It should be installed on the cold side of the roof and used in conjunction with DuPont AirGuard (a reflective vent control air leakage barrier) on the other side.

Tyvek is still the core product but its surface is coated with metallised fibres, which reduce radiant heat transfer and help to manage moisture levels. The reflective layer should face into the building to stop dirt building up on the metallised surface. Developed in Luxembourg, this technology is currently going through British Board of Agrément (BBA) approval.

Who has most input into specification?

Architects. But building control has some influence, too. Subcontractors can also affect things, but they often look at things on the basis of price. Subcontractors want BBA approval but not all products on the market will have the same level of approval as ours.

What factors are having most influence on the products and sector in general?

The environment is very important, particularly concerning carbon dioxide emissions. European-wide directives are influencing Building Regulations here, which affect allowable levels of emissions, hence the development of DuPont Climate Systems. Health and safety is also important and we’re looking at ways we can improve the product to the benefit of the installer.