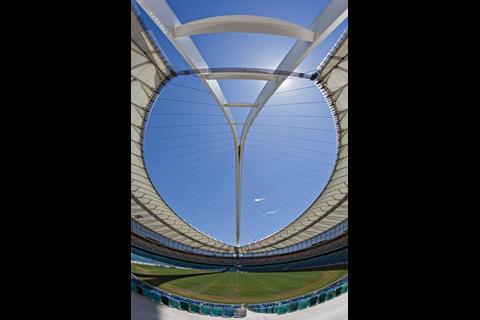 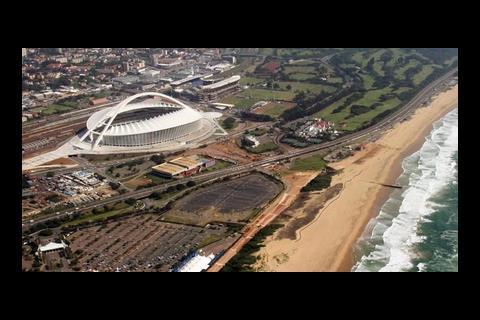 The arch of Moses Mabhida stadium in Durban will command 360Þ views, from the ocean to the east to the mountains beyond the city 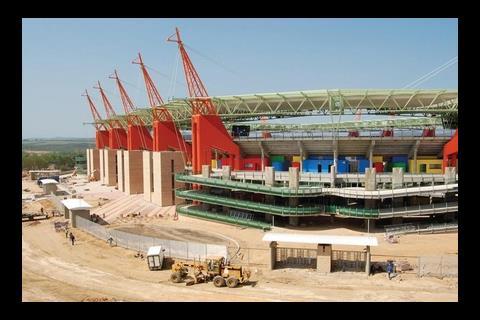 Not a white elephant in sight … Mbombela is in the bush so the local wildlife inspired its design. The roof support trusses are shaped like giraffes 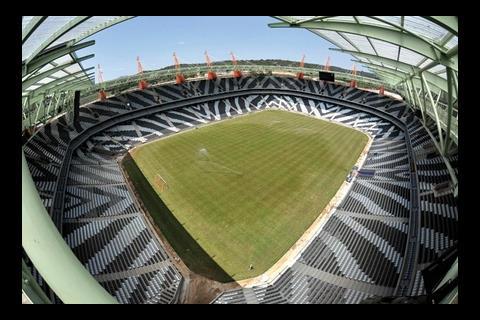 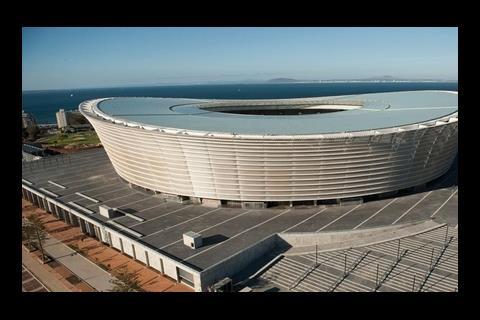 On 11 June, the 2010 World Cup kicks off in South Africa, the first time it’s been held on the African continent. Some 32 nations will compete in 10 stadiums, five of which are new. Stephen Kennett and Thomas Lane take a look at the construction of the big three

Almost a year ago to the day, the final 60-tonne section of the arch spanning the Moses Mabhida Stadium was slotted into place. Such an imposing structure is guaranteed to draw comparisons with Wembley, and Tim Ter Haar, business unit head of lead structural engineer BKS, says everyone on the project was aware that the arch at Wembley was a hot topic and caused a lot of problems.

But the construction of the arch at Moses Mabhida is significantly different. For a start it is self-supporting and, unlike Wembley, it isn’t canted over at an angle. It’s also a much simpler construction, says Ter Haar. That doesn’t mean the erection has been plain sailing, however.

The 560m span, which is Y-shaped in plan, is made up of steel box sections, 6m deep and about 10m long, which were fabricated in Germany, then shipped to site. The lessons from Wembley were fresh in the minds of Ter Haar’s team and there was an obsession both with the accuracy to which the massive concrete foundations of the arch bases were poured and the tolerances of the steelwork.

Each steel section was trial-assembled in the workshop before they left, to check that they would fit precisely and allow any inaccuracy to be accommodated by tweaking subsequent sections.

With the sections on site, the arch was constructed in situ beginning simultaneously from either end. As they gradually edged out, two large towers were used to provide temporary support. “It’s only when the final section was bolted into place that it became self-supporting and so it meant large temporary works were required,” says Ter Haar.

The big issue was the weather. Testing showed that towards the final stages of construction, before the arch was closed, certain cross-wind conditions could result in the arch oscillating and becoming damaged. The construction team had to use detailed wind forecasts to predict when there would be a suitable two-day weather window in which they could proceed with the next section and have enough time to get the temporary support structure in place. Fortunately most of this took place in December and January, outside of the really windy months, but it ate into the construction programme. “We had a lot of weather delays,” says Ter Haar.

With the arch in position, the construction of the 46,000m2 ETFE roof could begin. This is suspended from the arch by 56 steel cables, each 90mm in diameter, and secured around the perimeter of the stadium by an 880m steel compression ring.

But the arch doesn’t merely support the roof. At the competition stage the Ibholo Lethu consortium behind the design gave the option of adding a viewing platform and a furnicular railway up to the arch. “Durban doesn’t have an iconic building in the centre with 360Þ views across the city, and they liked the idea,” says Ter Haar.

Surprisingly this didn’t overly complicate things as the extra weight was small compared to the roof and the wind loading. But it did mean changing the geometry of the arch slightly to accommodate the steps and to keep the rails out of sight.

More than 100 people can be comfortably accommodated on the platform at any one time. The views are unobstructed, from the ocean to the east to the mountains to the west and the city in between. Now that’s something Wembley can’t boast.

It doesn’t take a genius to work out where the design inspiration for Mbombela stadium came from. It’s slap bang in the middle of the bush, hence the strong colours, giraffe-shaped roof support trusses and zebra stripe seating. “When you say the trusses look like giraffes, the usual response is ‘how twee’,” says Paul Officer, the Mott MacDonald project director for the roof design. “But when people see it, they think it works well and it is actually structurally incredibly efficient.”

Officer explains that the design team didn’t start out trying to make the trusses look like giraffes. “As we developed the roof the trusses began to take shape as giraffes,” he says.

“We simply added two extra elements to make it look like a giraffe’s head.”

The outer roof edge is supported by 16 of the giraffe-shaped trusses ringing the stadium. The roof is a cantilever supported by the trusses at one side. To counteract the oveturning forces generated by the cantilever, the trusses feature two widely spaced legs (like a giraffe) for greater stability. The trusses extend above [beyond?] the roof line supporting a cable linked to the inner edge of the roof.

The whole roof structure actually functions as a cantilever with the cables primarily stopping the roof edge flapping around. Officer is delighted that the team managed to reduce the amount of structural steel needed for the roof from a typical 100+ kilograms of steel per square metre to just 55kg/m2. But the ultra-light design meant wind uplift was a potential problem. Cables were likely to sag as the roof lifted, making spectators nervous. The solution was to add 100mm depth of concrete to a walkway running around the inner roof edge to anchor it.

The structural design got the ultimate test in January last year. A freak storm blew a crane over, which smashed into the roof structure. “I got a text from the site engineer saying a huge chunk had been taken out of the roof by the crane,” says Officer. “It wasn’t what I needed at the time.” He says that despite severe damage, the roof remained standing, which is a good demonstration of how well the giraffes fit into their environment.

Point stadium has been dogged by controversy. Planning disputes, budget problems and a switch in location involving a last-minute redesign meant it started a year late on site. Despite this, in December the stadium was completed and boasts what is claimed to be a world first for a football stadium, a glass-covered roof.

But why go for glass when the entire underside of the roof is hidden by a fabric membrane? The decision was partly down to planning, says Gerrit Bastiaanse of lead structural engineer BSK. The 68,000-seat stadium is overlooked by some of Cape Town’s most affluent areas. “It was decided that we needed an aesthetically pleasing roof – you don’t want them looking down onto corrugated sheet metal,” says Bastiaanse.

But there was another important structural consideration. The geography and the proximity of Table Mountain create highly accelerating winds coming in off the Atlantic. Testing of a scale model in a wind tunnel showed that the wind tries to suck the roof up while at the same time pushing it down in other areas. “You have the risk that this dynamic movement is set up in the roof, which could be catastrophic,” says Bastiaanse. By using glass the engineers had a material that was heavy enough – 1,500 tonnes in total – to resist this pummelling.

The 37,000m2 roof cantilevers 55m out from the stadium’s perimeter and is hung off 72 concrete columns using a lightweight cable tension structure. Another planning stipulation was that the roof shouldn’t be visible from outside, so it is designed to slope down towards the pitch.

The stadium was originally going to be much larger but when the design was scaled back to reduce costs, the roof shrunk and so did the size of the 72 concrete support columns – from 6.5m wide to 3m. This caused a problem for the contractor who had planned to build these in advance of the rest of the structure so that work could get under way on the roof as early as possible. When the columns were scaled back in size, it was discovered they lost 90% of their stiffness. The structural engineers and the contractor worked together to redesign the columns to allow them to be constructed before the slabs and beams. The upshot is they were able to complete the entire stadium in just under three years, six months before the first whistle blows.