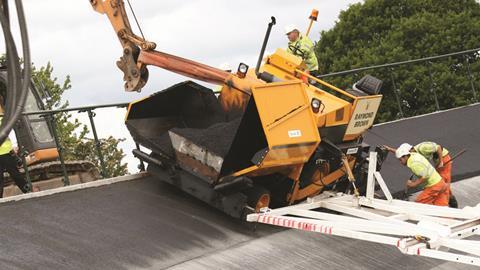 The 2012 Olympics are fast approaching but in all the hype we musn’t forget sports venues of the past. Building visits the first Olympic velodrome as it undergoes a restoration to its former glory

With only a year to go until the start of the 2012 Olympics all eyes are now on London’s newly completed venues.

If there was a Olympic title for best venue the Hopkins-designed velodrome must be among the favourites for gold. It has already been placed on the shortlist for the Stirling Prize and New London Architecture hailed it the best new building in the capital earlier this month.

While the gleaming 2012 velodrome has been rightly lauded, another Olympic velodrome on the other side of London has been unforgiveably allowed to rot after years of neglect. Herne Hill’s outdoor velodrome was built in 1892 and hosted the track events at the 1948 Olympics. It’s been popular ever since thanks to devoted volunteers but years of wrangling between the council and landlowner Dulwich Estates, has left Herne Hill in a perilous state, with condemned grandstands and a crumbling track.

With all the talk of legacy around next year’s Olympics, the rundown velodrome risked mocking the aspirations of Margaret Ford and her Olympic Park Legacy Company.

Fortunately the warring parties have reached a truce and a long-term lease has been given to British Cycling to look after the track, which has enabled the body to raise money for refurbishment.

Work on the new track started this month. Herne Hill’s 7m-wide existing track is made from concrete, which over the years has suffered from water penetration and the resultant frost damage. An epoxy resin was applied to hide the cracks, but this has also now failed. British cycling chose Tarmac to lay a new track as it had previously worked with the company to develop a track that met the exacting requirements of riders - smooth, dry and very, very fast.

Tarmac worked closely with British Cycling to develop a special product for velodromes called MasterTrack. Such was the unique specification for cycle tracks that none of Tarmac’s existing materials were deemed suitable. The company also had to find a way of laying the product as velodrome tracks are steeply banked.

“The difficulty is the banking,” says Nick Angelou, general manager for Tarmac National Contracting. “The biggest challenge was using the equipment on the slope and compacting the asphalt.”

The MasterTrack asphalt mix is laid using a paver, which is a manned vehicle usually seen working on Britain’s roads. With the velodrome’s camber sloping at up to 70% there is the risk that an unsupported vehicle could tip and roll over. “We had to develop specialist equipment with manufacturer GP Paver, which made it possible to work on steep slopes,” says Angelou.
Between them they devised a hinged frame that connected the paver laying asphalt on the slope with a larger paver machine sitting on the flat area on the inside of the track. “The rig acts as an A-frame to stop the paver from rolling,” explains Angelou.

As well as supporting the paver, Tarmac and GP had to alter the machinery to be able to work on a slope. “We had to redesign the hopper, rearrange the hydraulics and ensure a seat could be moved at different angles,” says Angleou.

It wasn’t just the paver that needed to be adjusted; the composition of the surface material had to be altered to make it ultra-smooth, impervious and very compactable.

As the asphalt is being laid on a camber, Tarmac has had to add more binder to prevent the mixture from flowing down the slope before the paver and then a roller compacts the surface.
It was vital the track was impervious to prevent water penetration and to discourage water from sitting on the track. “It has a very fine surface’” says Angelou. “If it has an open texture then pools of water will form and it won’t dry.”

The mixture is made up of fine granite stones, which contribute to the smooth, hard finish. Angelou said it took some time in the lab to get exactly the right mix. “We experimented with the material’s properties by varying the stone size, quantity of sand, binder, and moulding additives,” he says.

The asphalt is being laid on the original concrete base. This was formed in 10m sections and the junctions were reinforced with fibre-glass to ensure a smooth base before the asphalt was laid in 3m strips.

The six-week programme will mean the track will be ready for racing once again. Further improvements including a new outer track safety fence and a wider run-off zone inside the track, which is currently grass.

Building magazine knows the track well, having hosted construction industry track days in 2008 and 2009. Unfortunately, 2010 had to be cancelled because of the rain. The new track will make it much more likely that events won’t be cancelled due to the weather, so we could soon be returning for a third time to London’s first Olympic velodrome. Watch this space. 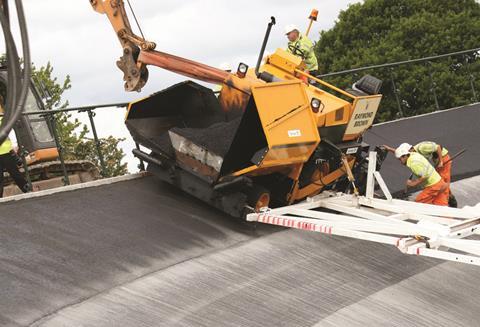