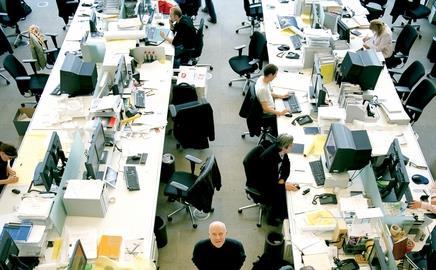 The great man’s success is the result of a lot more than his ability to design buildings. Indeed, he has a whole repertoire of accomplishments, from uncanny persuasiveness to ruthless efficiency.

The most important trick to being an architect is getting the job. It’s a competitive business and Foster competes. You can be the best designer in the whole world, but unless you can persuade someone to build what you’ve designed, you might as well be an unpublished novelist. Of course, when you get to be a real operator, you may be clever enough to design a building for one client and end up getting another to build it.

When I first started my training there was a clear separation, at least in Britain, between “architects” who aspired to create architecture and “commercial architects” who merely produced buildings. The former was exemplified by Denys Lasdun and the latter by Colonel Seifert. However, word was spreading about some new kids on the block who seemed to belong to the former while operating in the camp of the latter. Norman Foster was the principal example. And not least among his many skills was a genius for getting his designs constructed.

When I started out, I didn’t really have the first idea about the connection between being an architect and running a business.

I somehow imagined that once you were a big-time architect, clients would ring up and say: “Build us an office and send us the bill.” So when I first heard about Willis Faber Dumas it didn’t strike me as odd that an architect had persuaded a hard-nosed insurance company to build an office in Norwich whose walls were made of sheer undulating glass that came right down to the pavement. Older colleagues were astonished.

Later on, it became apparent what a shrewd choice Foster had been and that Colonel Seifert was not the only architect who understood about net to gross … word began to seep out that Willis Faber was actually quite cheap. Later we heard that when Renault hired Foster to put Swindon on the map, not only did they obtain consent for something half as big again as they otherwise might have done, but the press coverage of the building as it emerged with its cranked yellow steel columns and turnbuckled tension rods was worth a fortune in advertising.

That flair for getting the job was reinforced by the Hongkong and Shanghai Banking Corporation HQ. There were rumours that during his interview Foster had persuaded the client that if they really wanted the project when they said they did, they’d have to appoint him, as there was no time to interview anyone else. All right, so he’d never built anything more than three storeys before, but hey.

Foster also had a knack for making relatively ordinary jobs special. For a while I had an office opposite The Sunday Times building in Gray’s Inn Road, built by Seifert in the seventies. This was to be knocked down and replaced with Foster’s building for ITN. I watched the whole operation with increasing admiration. For one thing, it didn’t have any scaffolding. A steel frame seemed to hoist itself into position, and then the elevation arrived in a lorry, and went up in panels three storeys high. And it wasn’t built by robots in white boiler suits, but by the usual construction operatives – indeed, I think someone managed to drop a panel.

He said: ‘The only one fellow that seemed to understand the
programme was this Foster chap. What’s his stuff like? Is he any good, do you know?’

I have a friend who works for ITN and I use him as an excuse to take my young assistants round it. Each time I’m more impressed. It’s very elegant. Light, airy, legible, with lots of different activities going on, and although it’s not very high spec, it is terribly sexy.

Then there were his project management skills, which ensured that these things were actually built. At the time the ITN building was gestating I was on holiday in Portugal, and I found myself talking to a senior military type who had been advising the government in Hong Kong. “We’d been searching for someone who could build a new airport for them before the Chinese took over. Had to get it done sharpish, you know. Get a serious wiggle on. Looked all over the place. Only one fellow seemed to understand the programme. This Foster chap. What’s his stuff like? Is he any good, do you know?”

Now if the first trick is getting the job, the second is making it look like something. Foster amazes by how he manages to do that. Up to the mid-nineties, everything coming out of the practice had been rectilinear, grey or silver, and built in steel and glass. Then one of the mags printed a picture of Foster’s proposed American aircraft museum at Duxford. That was the first time anyone had heard the word “toroid”. Or seen Foster build an enclosure using concrete.

A few years later I was lucky enough to go on a press trip to Duxford, conducted by Foster, who radiated enthusiasm. We all know the boy is crazy about flying, and here he was showing us around a museum he’d just built round a B52. All excellent stuff. A few days later I was talking to an engineer at Price & Myers about it and I said something like “must have been hell to work out that roof” (it was the shape of a third of an egg and built like an igloo, from differently shaped sections of concrete). “Tell me about it,” he said. “We had to design it for the contractor.” I’d somehow imagined Fosters had put a drawing of each individual piece of concrete in the tender package. It appeared not. When you tender for a Foster building it’s a question of “You’re the contractor, you work it out.”

Foster has an impressive knack of keeping the momentum up despite the difficulties that threaten all construction projects. And he somehow avoids the blame when they go wrong. Wembley stadium was a disaster for Multiplex and a triumph for Foster. And somehow it’s Foster’s “Blade of Light” and Arup’s “Wobbly Bridge”.

Finally, there’s the scope of the firm’s work. This is simply astonishing. There’s that amazing viaduct at Millau, the colossal Dresden Bahnhof wrapped in clingfilm … and if anyone thinks Foster doesn’t understand “urban conservation” they only have to look at the extraordinary tower jacked into the air over a twenties office in New York’s Hurst Plaza. And just compare the scale of those cool little glazed entrance hoods to the stations in the Bilbao tube (Fosteritos, as they’re know) and the entrance to the Jubilee Line station at Canary Wharf, which is positively Olympic in its ambition.

I don’t know if the firm is discreetly building acres of drossy office blocks to fund all the design time these masterpieces must require. But if they are, dross Foster is probably five times better than that built by most of the “commercial” architects who usually do that stuff. Most recently, he’s designed a rocket launch pad for Richard Branson. The thing looks like a bronze stingray that’s about to take off. One feels there’s no limit to what the firm will do next. Or where. Or for whom.