The many lives of Joseph Aloysius Hansom 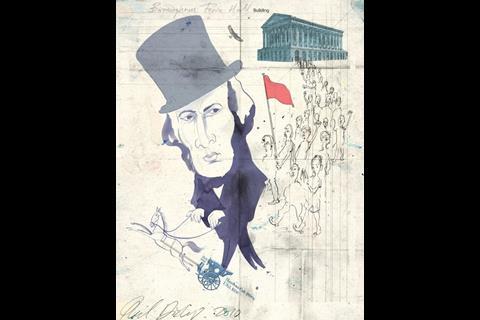 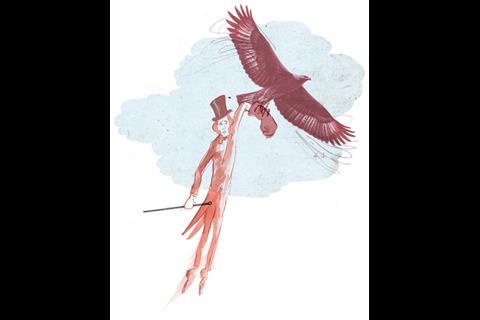 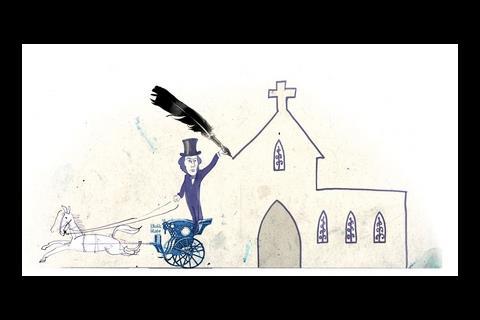 Talented inventor, kamikaze contractor, prolific architect, hopeless entrepreneur, socialist eagle fancier and of course founder of the magazine in your hands … Nick Jones reviews a biography of one of the Victorian age’s most remarkable characters

For regular readers of Building, the name Joseph Aloysius Hansom should be at least vaguely familiar. He is, after all, our most regular columnist, tirelessly reporting from industry events and maintaining a weekly supply of gossip, inside information and scurrilous rumour. Some may be aware that it was Hansom who founded this magazine, as The Builder, in the early Victorian era – which makes the fact that he consistently hits his deadline 120 years later all the more impressive. Others will know him as a prolific architect, most notably of Birmingham’s grand Roman-style town hall, still much loved and recently restored. And yet more will associate his name with the famous horse-drawn cab, without which the likes of Sherlock Holmes would have had the devil of a time finding their way around fogbound London.

All these achievements and more are exhaustively detailed in a biography by historian Penelope Harris, which may offer an interesting perspective on many of the dilemmas faced by Hansom’s modern counterparts. Whether you’re wondering how to get a foothold on the architectural career ladder, win major public sector projects, improve relations with your workforce, bounce back from the brink of disaster – or just want to keep unusual pets, Hansom was there first …

Joseph Aloysius Hansom was born into a large Catholic family in York in 1803. The “Aloysius” was to distinguish him from a neighbouring cousin, demonstrating on the part of his parents both a lack of imagination when it came to naming children, and a fondness for slipping in the occasional wildcard. The second eldest of 10, Hansom left school at 13 with little formal education, yet “was soon in a teaching role himself at night school” – perhaps not the greatest advertisement for the late Georgian education system.

Hansom’s father, like his father before him, was a builder, and, keen to carry on the family tradition, he got his son an apprenticeship with a local architect. From there, Hansom’s rise was swift. At 21 he met and went into partnership with one Edward Welch, who at 18 was barely old enough to own his own top hat. Yet within six years, Hansom & Welch had landed one of the most prestigious architectural commissions of the 1830s: the town hall for the industrial boom town of Birmingham.

This at first seems puzzling. There were some big beasts prowling the 1830s building design scene. Both Charles Barry, who was just five years away from designing the Houses of Parliament, and Sir John Soane, the architect of the Bank of England, had submitted entries to the competition. But Hansom & Welch had one thing in their favour: an almost suicidal strategy to undercut every other bid by a massive margin. Their estimate of £16,648 was the lowest of all the entries received by £6,000. If the town hall commissioners were slightly suspicious of such a bargain, their anxieties would have been quelled by Hansom’s agreement to take full responsibility for the builders and act as financial guarantor for the project. What could possibly go wrong?

Hansom was declared bankrupt in 1834. His ability to fund the town hall project had depended on the prompt delivery of supplies, which, in hindsight, should have deterred him from specifying rather a lot of marble from a quarry on an island off the north coast of Wales. Delays ensued, the money ran out and the commissioners decided to take the project out of his hands and place it into those of the Liverpudlian architect John Foster. Hansom’s increasingly drastic attempts to raise capital had included insurance policies taken out on his and Welch’s lives – a scheme that, one would imagine, may have disconcerted his partner. Whether or not this was a contributing factor, the relationship soon dissolved. If you were wondering why the name Edward Welch hasn’t echoed through the halls of history, he moved to the Isle of Man to design central heating works.

The Birmingham years also reveal another side to Hansom. Building tends to depict him as a cross between Pitt the Younger and, well, Pitt the Elder, but to his contemporaries he was “the socialist architect”. In the early thirties, with the Great Reform Act still being thrashed out, unrest was never far from the surface in the great industrial centres. Rather daringly for a man who had promised to pay his builders with money he didn’t quite have to hand, Hansom encouraged his own workers to join unions. He even designed a guild hall for the fledgling builders union, placing a box beneath the foundations that declared a “confident hope of a new era in the condition of the whole of the working classes of the world”. His commitment to the formation of the union was so great, says Harris, that it reached almost a spiritual level – he described it as “a new life and a new light”, something you rarely hear today’s construction professionals say about Ucatt.

Harris says it was “emotionally unacceptable” for Hansom to remain in Birmingham after the town hall debacle, so he and his family decamped to Hinckley in Leicestershire. Hansom had married in 1825, and by this stage had several children. And a golden eagle, which he kept in the back garden.

Despite his financial setback Hansom had mouths and beaks to feed, so was soon designing again, including commissions for two local banks. And by the end of 1834 he had submitted patent number 6733 to the Patent Office. The first Hansom cab was built in Hinckley soon after and in 1836, the Safety Cabriolet & Two-Wheel Carriage Company was formed with capital of £100,000 – nearly £4.5m in today’s money. By the end of the century, there were more than 7,000 Hansoms in London.

Hansom the man, however, preferred to concentrate on architecture, apparently reasoning that his legacy was more likely to be secured by such commissions as Lutterworth town hall or the Hinckley branch of the Leicester and Warwick bank. The only money he ever made from the invention that bore his name was the £300 the cab company gave him “for his time and trouble”.

Hansom’s inability to make any money was becoming a theme, and a lesser man may have been deterred from further ventures. Not Hansom. In 1842, having moved to London (staying in Barry’s house while he was overseeing the construction of parliament), he launched The Builder, a weekly journal with a strong whiff of social reform about it, which sought to “encompass the whole building trade and promote better communication between its parts”.

The Builder was a diverse tome. A section called Our Sermon “dealt with the relative duties of master and man”; there were reviews of such publications as “Father Oswald, a genuine Catholic story” and “Geraldine, a tale of conscience”; and there was a section for women readers, including such features as “The English Maiden” and “The Ladies Work-Table Book”.

Somehow the public resisted. Hansom estimated a potential readership of half a million, but by July 1844 sales were 3,000 and failing to cover costs. Only 41 and with nearly 40 years of ideas ahead of him, he handed the project to his printers JL Cox & Sons, and returned once again, to the drawing board …

When Joseph Hansom and The Builder parted ways in 1844, the architect had almost four decades of working life ahead of him. This period included much of the work that made him one of the leading figures of the gothic revival. From Preston to Plymouth, Hansom’s architecture can still be seen in schools, civic halls and particularly churches – the 19th century, which witnessed a vast influx of Catholic immigrants from across Europe, would have been full of possibilities for a firmly Catholic architect like Hansom. Here are a few of his finest surviving works: