The Old Admiralty Building: back in Her Majesty’s service

Inside a restored turret with views over Whitehall. The  spiral stair descends past a secret concealed floor, back to the main top floor of the building

Westminster’s grand Old Admiralty Building is the backdrop to many of the nation’s most important ceremonial events. Its turrets and handsome red brick and Portland stone facades face both The Mall and Horse Guards Parade, scene of Trooping the Colour and the Olympic beach volleyball in 2012. This summer, on the 75th anniversary of VJ Day, the actor Hugh Bonneville clambered through a window while vintage newsreel was beamed across the facade.

These 130-year-old walls, enclosing almost a hectare of prime land in a highly secure area of Whitehall, are all that most people will ever see. But it is within them that some of the most significant – and classified – events in the 20th-century history of the UK have taken place.

It was from here that Winston Churchill, as First Lord of the Admiralty, waged a naval arms race against the German empire in the run-up to the First World War. It was also here, in 1917, that cryptographers cracked the Zimmermann Telegram, changing the course of that war. 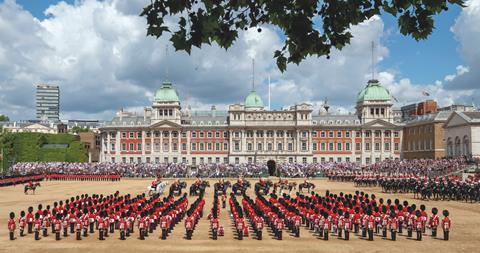 During the Second World War, naval intelligence officer 17F – better known as James Bond creator Ian Fleming – was based in room 39. Clearly possessing a sharper eye than his employers for a catchy codename, he hatched Operation Ruthless, a daring, if ultimately aborted, plan to capture a Nazi Enigma machine on the high seas. An earlier list of ideas to lure U-boats to the surface was proposed in a document nicknamed the Trout Memo because Fleming’s methods were inspired by fly-fishing.

It was details such as these that captivated the team appointed to restore and modernise the building in 2014: architect and engineer BDP, project manager and QS Mace, services engineer and lighting and fire consultant Hoare Lee and main contractor Willmott Dixon – which joined in 2017 after negotiations with original preferred bidder Bam broke down causing a considerable delay. 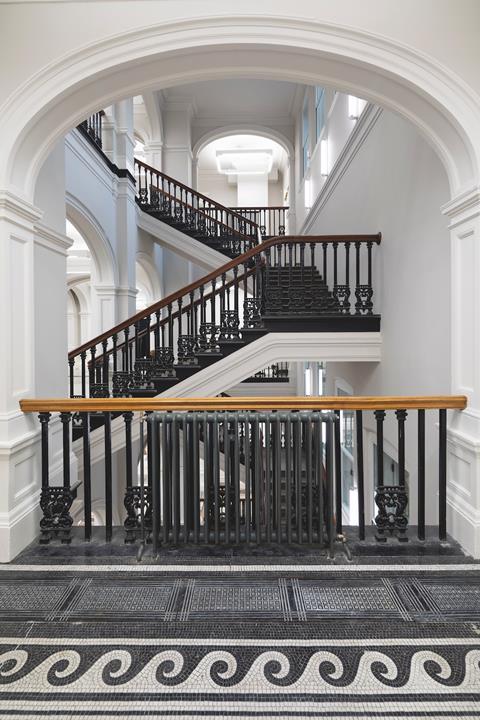 While it is the glamorous whiff of espionage that turns heads, the £60m project was nonetheless laced with its own modest drama. Lead architect and BDP director Ilic Testoni gave Building a private tour and recounted the “exhilarating journey” which has just ended with the building’s handover.

The Old Admiralty Building, sometimes known as the Admiralty Extension, is the largest of a complex of buildings once used by the government department that oversaw the Royal Navy. Architect Leeming & Leeming of Halifax won the design competition in 1888 and it was built in three stages up to 1907. It was grade II listed in 1974 and most recently occupied by the Foreign Office during a refurbishment of its nearby King Charles Street headquarters.

The rambling OAB, as it is known, has been knocked about over the years, not to mention scarred by wartime bombing. The original rabbit warren of corridors linking small offices heated by back-to-back hearths was ripped out years ago, although the odd fireplace survives. BDP’s brief was to restore the historic fabric while modernising, and significantly increasing to 24,000m2, the office space contained across its five main floors.

The OAB will remain in government use – including half a dozen specially strengthened rooms providing a new home for the Hockneys and Hepworths of the government’s art collection – so security was a major consideration. Another headache was the Victorians’ enthusiastic use of asbestos. Every wall that came out had to be painstakingly dismantled in sealed conditions by specialist contractors. 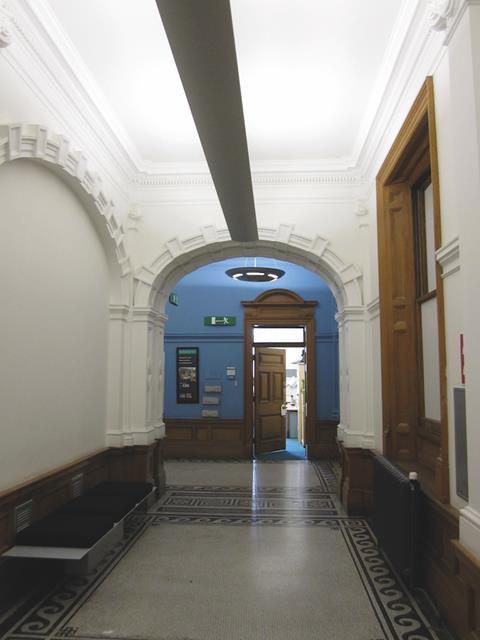 Testoni recalls his first visit, after passing the “pretty demanding” security brief. “It felt quite cramped and tired, and the colour scheme was incoherent, which made orientation a bit of a nightmare,” he says.

“There were long, monotonous corridors and problems with overheating and ventilation. The roof lights had not been cleaned for years. User feedback was pretty negative.”

The building is ranged asymmetrically around three sides of a central courtyard, while paired corridors run through the bigger north and west wings, separated by long lightwells. The view out of every window was obscured by anti-blast curtains. It was no wonder that the occupiers were confused. But there was also beautiful detail: a gloriously Piranesian central staircase, glazed bricks, timber panelling and mosaic or terrazzo flooring along almost every corridor.

Testoni’s team set to work assessing the building, taking measurements, talking to conservation officers. They were in the early stages of design development when a sudden order came through to stop taking photographs.

“There was a crisis between Ukraine and Russia that raised the alert status,” Testoni explains. He is not allowed to say more, but one assumes that there was a risk of sensitive documents relating to the annexation of Crimea being accidentally caught on film. The team had to continue their work on the basis of assumptions about a very unpredictable building.

Things got easier once the FCO moved out, but that was only just before the contractors moved in at the end of 2015. There were some areas the team was never allowed into – and some they found by accident, such as the remains of ghost stairs, and a secret windowless level in each of the turrets. “No skeletons were found, just a lot of dust and the occasional old newspaper,” a team member remarked.

The building is full of little oddities. the discoveries were part of the fun … well, apart from the nasty discoveries

Probably the biggest challenge of all was how to upgrade the services without destroying the interior’s period charm or intruding into protected views. In the end there was no way of concealing plant on the roof, so some office space had to be sacrificed for that.

The next problem was how to install two 10-tonne chillers in the courtyard. A helicopter was considered but ruled out on safety grounds. Eventually they were lifted in by two giant cranes assembled (one by the other) on Horse Guards Parade. It was a precision job since historic masts and wires criss-cross the air space 40m up. Once in place, the chillers and risers in the lightwells were screened with perforated zinc panels.

Inside, the team decided to keep kit out of the corridors – which are attractively sprinkled with mosaics, oak panelling and quoined arches – and locate it in the offices which are less special. With occupancy increased and opening windows ruled out on security grounds, they needed to boost air-con capacity considerably to make the offices comfortable. Down the road at the Foreign Office staff fought to work in temporary cabins rather than the sensational grade I building because at least they had air-con in them. 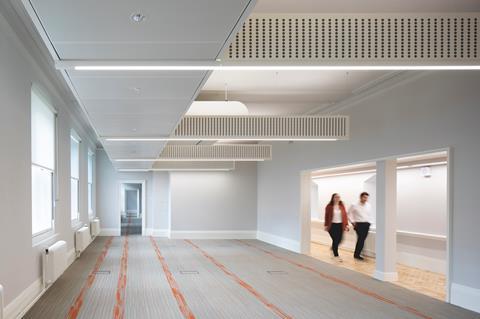 Most of the services are delivered through units suspended from the ceiling in the office spaces, leaving the more attractive corridors clear of clutter. This is the top floor, as the corridor is parquet rather than mosaic, and the openings between corridor and office space are wider than on the lower, more ornate floors. The red woven through the office carpet indicates that this is the west wing, facing The Mall

“Very hefty bulkheads would have been extremely contentious in planning terms so we started rethinking,” Testoni says. By using the existing cast-iron radiators and floor voids, the design team limited the new interventions to – still fairly chunky – suspended rafts with perpendicular lighting baffles. This allows occupants to see the original cornicing and retain a sense of the building’s proportions.

Throughout the project the focus has been on character, history and the patina of time. The team has done what it could on a tight budget but left things for future conservationists to tackle.

We end our tour in the basement, where flagstones have been restored rather than carpeted, causing the man from Historic England to faint with joy. Yet also down here thick grey paint sloshed by some pragmatic philistine over the glazed brick walls remains, too costly to remove.

Suddenly Testoni opens a wheelchair-accessible toilet door with a flourish, revealing a riot of colourful Victorian tiles that escaped the unsympathetic 1980s paint job. “The building is full of little oddities,” he grins. “The discoveries were part of the fun. Well, apart from the nasty discoveries.

“It has been exciting and rewarding working on a national icon. We’ve made the building sing again.”

One of the biggest steps was opening up the floorplates. Despite earlier modernisation work to knock rooms together, the office space was still accessed through endless doors off endless corridors. BDP’s solution was to widen and increase the openings, improving visibility, permeability and ventilation. A hierarchy of decor dictated that on the ground floor most of the original fabric had to be preserved, but the design team got away with more radical interventions higher up. Nonetheless the new openings had to line up with the dado panels – something the contractor learned to its cost when asked to rebuild one of the first walls it took down.

Where the paired corridors meet – at the “knuckles”, where messengers were once stationed – they created open kitchen areas as focal points for the new enfilades. As a further aid to wayfinding they wove subtle colour coding into the office carpets: blue for the north wing nearest Trafalgar Square and its fountains, red for the ruddy tarmac of The Mall, ochre for the south wing facing Horse Guards.

But one of the single most effective moves was replacing the bomb-blast curtains with toughened secondary glazing. This allows users to orient themselves by reference to surrounding buildings, as well as providing thermal and acoustic benefits.

It was only permitted after they erected a huge rig with a pulley to replicate the kilonewtons of an explosion. It was a nerve-wracking moment but it proved that a blast would not splinter the original oak reveals. The windows have also been covered with a soluble film just 150 microns thick which cuts out 95% of solar glare and helped to achieve a BREEAM Very Good rating.

Testoni describes the windows as “our greatest achievement”. For the first time in decades it means that occupiers can enjoy the views over Whitehall and St James’s Park. Not much can be done to improve the aspect from the west wing, however, as it is just a few feet from the three-storey concrete walls of a top-secret wartime bunker called the Citadel.