The peasant's revolt this ain't: Chelsea vs the barracks 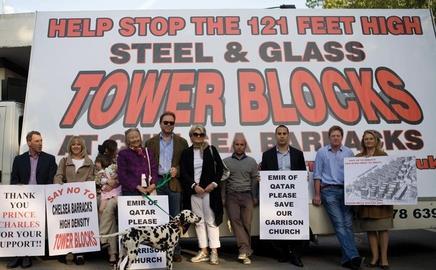 This gang of Chelsea residents is on the cusp of pulling off a very English coup. Emily Wright met their ringleaders

On a balmy Thursday night, the well-heeled residents of Belgravia are out in force – and Prada – to make a stand. Striding along Chelsea Bridge Road, Georgie Thorburn leads the way in a beige dress accessorised with oversized designer sunglasses, a fistful of diamond rings and a dalmatian on a red and gold leather leash.

Following her is the Chelsea Barracks Action Group, or CBAG, the residents taking on Westminster council over Rogers Stirk Harbour + Partners’ design for the Qatari Diar development in the heart of Chelsea. And with media reports rife that Rogers’ plans may be dropped as Building went to press, it is looking increasingly likely that they may well be victorious.

The background to the project is well known – the £1bn Candy & Candy scheme has been plagued with controversy and in April, the Prince of Wales appealed to the Emir of Qatar, the lead investor, to scrap the glass and steel scheme, and consider plans by traditional architect Quinlan Terry.

Less high profile, however, has been the involvement and commitment of CBAG in this battle since February 2007. It was Thorburn herself who first approached Terry.

“Out of sheer desperation I called Quinlan Terry’s office to explain our position in February,” she says. “I told him how we felt and suggested that as he had designed the Royal Infirmary building across the road then it made sense for him to have a go at the barracks. And he kindly agreed to sketch an alternate. But it was real back of the fag packet stuff and just can’t be compared to the other.

“In terms of how then this got passed on to Prince Charles, well, I know he works a lot with Quinlan Terry so I understand it was just passed on in conversation. We are very lucky to have his support – without him we’d just be another bunch of residents fighting a council.”

One thing CBAG certainly isn’t is “just another bunch of residents”. Even without the backing of the influential players they share their postcodes with, Thorburn has rallied a group of campaigners capable of making their own headlines. Last week, they descended on Chelsea Flower Show to collect more than 1,000 signatures to petition the council with, have threatened legal action against the council (see box, opposite), have a QC waiting in the wings and have had meetings with London’s deputy mayor, Kit Malthouse.

Thorburn makes clear that the action group has no intention of backing off, despite media reports that victory may be within their grasp: “There have been no confirmations of these media reports,” she says. “I won’t believe a word of it until I see it in black and white. We are just going to wait and see what happens before getting excited. It could all be smoke and mirrors.”

And if there was any need for evidence that the CBAG-ers are not resting on their laurels, as if on cue it slowly pulls up next to the campaigners – a colossal promotional van emblazoned with the words “HELP STOP THE 121 FEET HIGH STEEL AND GLASS TOWER BLOCKS AT CHELSEA BARRACKS”. It will be touring the local area in the coming weeks. “Feast your eyes on this little beauty – isn’t it just marvellously fabulous,” shrieks Thorburn.

With the all-important new addition to the campaign in place, Building took the chance to talk to the Belgravia residents who have taken on Westminster council, Richard Rogers and the Qatari royal family.

We all expected the Westminster planning brief to be adhered to, which says the buildings should be between three and five floors, and have no steel or glass – it’s very distressing. Apart from the building blocking our light, we’ll have an extra 2,000 people living here and no extra roads. We’ll keep going to the end – we owe it to our supporters. And we know Richard Rogers – he lives just over the road in a very nice Georgian-style house with totally unblocked views …

My restaurant is bang next door to the development and I’m concerned it will bring a considerable number of people to an area with insufficient parking space. But even more important is that we’re going to have the juxtaposition of old London with something that is made out of quite unacceptable materials.

I just can’t believe that after all this fighting the Qataris would just drop the designs like that. I just can’t see it happening. I think it’s a PR exercise to stop people protesting too much.

I moved here two years ago because it’s a special area. When I heard about this plan I was amazed they got away with it. The project is out of scale with the area; it is brutal. I read it was a democratic process. I can see how it might have been originally but now the application just doesn’t look to be in keeping with the planning brief, which said it should be kept in mind that Kensington and Chelsea is full of grade I and II-listed buildings.

I’m very disappointed this has even been considered. It is so inappropriate for the area. We do want beautiful new buildings but we want something softer and more traditional. We will do everything in our power to prevent building to the design on the table – whatever is necessary. I’m not sure I would chain myself to anything, but I would go as far as possible. We have a good case – there is nobody I’ve spoken with who has not agreed with our objections.

We’ve already have meetings with Kit Malthouse who is very supportive and we’re trying to meet with the mayor. He has already had meetings with the developer so we think it is only fair he hears our side of the story. We’d tell him the real facts of the application. The planning brief issued by Westminster council was very good but the planning applications since bear little or no resemblance to it.

I think architects have a duty to build buildings people like, not buildings they love themselves. And this is a perfect example of a building that an architect wants to build without paying any attention to what people actually want delivered.

Not convinced that Rogers’ plans will actually be dropped, the Chelsea Barracks Action Group is still preparing to launch a judicial review. This is its best option as, in the UK, only the applicant can appeal a planning decision. A third party can take the decision maker to court, but only to challenge how the decision was made.

Claire Dutch, a partner in solicitor Lovells, says anyone going to court with a judicial review would face “severe hurdles”. The group will have to prove to a judge that the council acted unlawfully before the case could go ahead.

For a judicial review to be successful, the council must have either failed to take into account material considerations – the environmental impact of the scheme, for example – or have arrived at their decision by taking into account irrelevant considerations.

Dutch says success in cases such as these is often 50-50. Even if a judge rules that the decision was unlawfully made, the council can go back and still arrive at the same conclusion, as long as they can prove that they arrived at the decision correctly.