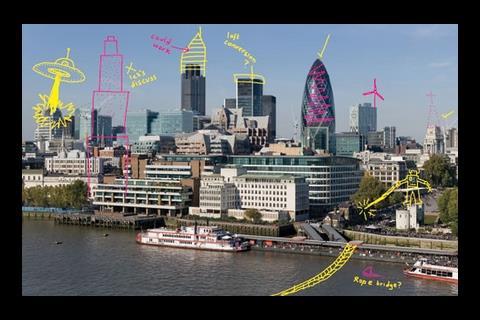 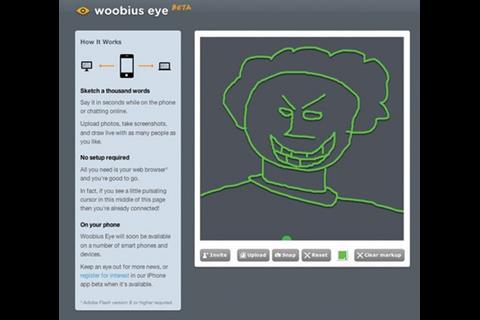 The latest web tools allow architects to note down ideas, scribble on images, and then share them at the click of a button. They’re simple, they’re cheap as chips, and they might just take over the world.

Intranet tools promised to revolutionise the way construction projects were managed. The idea that all the design and construction information for a big scheme would be accessible at the click of a button to everyone in the team, no matter where they were or what the time, promised huge advantages. Over the last decade these tools have matured, gaining more functionality and in the process becoming increasingly complex. But if you’re a firm involved in the early stages of a project, do you want to splash out on a sophisticated collaboration tool bloated with functions you’ll never use and which will take time to learn? Probably not, but a couple of new software products could be more what you’re after.

There are distinct parallels between Woobius and Sticky World. They’ve both been developed by practising architects with an aptitude for computing. They’re both small start-up companies and they’re both targeting the creative side of project teams. And what distinguishes these two web-based tools from existing products is their pared down simplicity. They are built from the ground up with construction projects in mind and take a lesson out of networking sites like Facebook by being intuitive to use and requiring minimal training.

The idea of a simplified collaboration tool began for Bob Leung when he was at Foster + Partners. Existing tools were great for project managers, developers and contractors to produce reports and track projects, but were not aimed at making life easier for architects. “On every project we had to use some form of collaboration tool and for the design team they were costly to use and time-consuming, which was counter-intuitive,” Leung says.

Together with three others, Leung began developing Woobius. It’s not a substitute for existing high-end tools such as BIW or 4Projects, he says, but is meant for the stages before the project fully kicks in – unless it’s a small project, in which case it could be used throughout. “You want something a lot more flexible but you do want the audit trail and you want the ability to send everything around to everyone so that you can save time and everyone is working to the latest information,” says Leung.

The key to Woobius is that it is intended to replicate the way a construction project runs. This is most evident in the way information is exchanged. There are two areas for doing this, the formal “vault” where drawings and information can be issued, and an informal “drop box” where an architect could, for example, run a concept past the structural engineer or exchange CAD backgrounds.

A full audit trail is provided. According to Leung, “history” is the most clicked on button in the system. It provides complete transparency and a record of what everyone using the system has done.

Another feature that distinguishes it from generic file-sharing tools is the way users are invited to the system. Again, it’s supposed to reflect how projects are run in real life. Rather than having a central administrator who has to grant access to lots of different people, whoever is in charge of the project can invite their colleagues to use it.“I shouldn’t have to ask a client to invite my colleagues to work on the system and it gets around the problem of my being off sick or on holiday,” says Leung.

Since its launch almost 10 months ago the take-up of Woobius has been impressive. What began with four users at architect Make has grown to 1,400 companies who are using it on 1,900 projects. Over 6,000 individual users are signed up. This is all without any advertising or a sales team.

And as projects progress, more project managers, engineers and contractors are being drawn in. “We’re starting to get to critical mass,” says Leung. “The construction industry is technophobic – or rather, we have a very wide audience – so something simple is attractive.”

Sticky World gets its name from sticky notes and, as you might guess, it’s all about communicating with people using comments scribbled on little yellow memos. But it’s a lot more organised than it sounds.

The tool is the result of a project funded by quango the Technology Strategy Board and led by Slider Studios, an architectural practice with strong links in developing computer design tools. Renee Puusepp, practice director, describes Sticky World as an online version of a meeting room. “It’s often a struggle to get people around the same table to talk about design; it’s something we have experienced and other architects we’ve talked to have said it’s a problem. We don’t aim to replace face-to-face communication – it’s a complementary tool.”

Existing technology doesn’t meet the needs for talking about design, he argues. Previously, swapping ideas outside of a meeting meant email and FTP sites, which isn’t an especially fluid way of communicating. Sticky World, however, goes a step beyond simply uploading things and sharing them.

Central to the Sticky World environment are Sticky Rooms. The analogy is that these are like meeting rooms where people are invited in to pin up details of their designs, whether it’s a drawing, visualisation, photograph or document. Others can then comment on it by writing on a note and sticking it to the part of the drawing they are talking about. All the current formats such as Jpegs and PDFs are supported. A room can be used for a specific project, several projects or simply an exhibition space for a practice’s work.

Puusepp says that when a new person comes onto a project “it’s very difficult for them to learn about it”. Sticky notes gets around this by giving them access to the “trail” of comments, which is searchable and explains the history of the project and the decisions made.

Whenever a note is posted there is the option to notify others by email and the facility for instant messaging within the room. Architect Scott Brownrigg has even made use of the room as a presentation tool in meetings.

Puusepp says: “It started as a tool for sharing early conceptual work, sketches and so forth but we soon realised it could be used throughout the life of the project, bringing in engineers, contractors and client.”

It’s also finding uptake beyond construction including in the education sector where a number of universities have been using it as a way for students to upload their end of year work for assessment by examiners. It also lends itself to public consultations, as it’s easy to see feedback.

Sticky World should be launched commercially this October. According to Puusepp the biggest challenge has not been technological but cultural. “It’s really about changing the way architects work.” Ultimately though, Sticky World could become much more than a file-sharing tool and more about a community built around its users and their work.

The next big thing

There is a development in the pipeline that could take collaboration to a whole new dimension. Construction is a lot about visual communication and so Leung and the team at Woobius are developing the Woobius Eye. It will allow users to upload a photograph or take a screen shot of a drawing and then mark it up and point to it in real time on the screen while having a telephone conversation with someone on the other end.

“This is different to what a lot of people think is a desktop sharing tool,” says Leung. “It’s not about showing someone your desktop – it’s about both of you using your fingers and pointing to things on a drawing or photograph and marking them up, which is how we do it in a meeting.”

Although it is essentially a tool for helping to make phone calls a lot clearer and quicker, it could also be invaluable on site. Both an iPhone and an Android application are on their way, which would enable, say, an architect on site to have a conversation with someone back at the office while talking over a drawing or a photograph. This opens up huge potential. Leung says they are in talks with a firm of approved inspectors who could potentially use it to cut down on site visits. Interest has also been shown outside of the construction industry by organisations such as the emergency services.

At the moment Woobius Eye is at beta test stage but the company is in talks with a number of construction firms about how they might incorporate it into what they do. Maybe the integrated construction teams of tomorrow will never have to meet each other at all …

what do the users think?

David Patterson of Make Architects was one of the first users of Woobius, and has now used it on a variety of projects.

“Much of the work produced at Make results in large file sizes and, prior to Woobius, it was always a challenge issuing our information to the design team or clients in electronic format. Often we were reliant on a cumbersome electronic transfer system that was very difficult to use, not only for us but for the recipient. Because of this, large files ended up being burnt on a CD and couriered – a costly and time-consuming process.

“Woobius allows us to be much more efficient and enables us to communicate in a much clearer way. In addition a key benefit of Woobius is that we have an electronic “paper trail” - a record of who has looked at each piece of information uploaded onto Woobius and we also have the option to use a formal drawing issue sheet if the project stage requires it.”

Phillip Shepherd of Bryant Priest Newman Architects first came across Sticky World at a Digital Birmingham workshop discussing the role of digital media in the delivery of construction projects.

“It is incredibly easy to navigate and provides an excellent way of commenting on and reviewing drawings. We enjoy the process of collaboration with artists, clients and other design professionals and Sticky World gives us the platform to do this. The instant email notification ensures that all room members are aware of the updated information, which can cut the amount of time spent issuing and re-issuing drawings.