The Prince’s Trust: Helping young people Get into Construction

Construction wants to attract a diversified workforce, and many would-be workers are trying to get away from unemployment and crime. Sarah Richardson meets

Mike Peasland, who’s helping the Prince’s Trust to help them do just that

A lack of diversity has long been one of construction’s most pronounced characteristics. Last year, a report by the Construction Industry Council found that 2% of the industry’s workforce came from an ethnic minority, and the presence of a woman or disabled person on a construction site is still pretty rare, despite years of campaigning to attract them to the sector. The recession has exacerbated the problem: with the workforce slashed, opportunities for workers outside traditional white, male backgrounds have receded even further.

In the current environment, if we don’t get the 16-25 year olds into employment now, the likelihood is they’re not going to experience a working environment

This pattern makes it all the more remarkable that the construction and business services arm of the Prince’s Trust, a charity responsible for introducing disadvantaged young people to industry, has seen a steady rise in the numbers attending its courses over the past year. The trust recruited 243 young people to its Get into Construction programme between April and December 2009, many from minority groups. A total of 23% of were from non-white ethnic minorities, 21% higher than the industry average, while 12% were disabled. It seems that even in the toughest job market in the last 20 years, the trust is making headway in opening doors to the sector.

But with pressure on the funding it gets from both the public and private sectors, the trust is now under more scrutiny than ever over the impact it is having on young people and the industry. Here, Prince’s Trust construction group chairman and Balfour Beatty group managing director Mike Peasland discusses the charity’s performance over his first nine months in charge - and explains why the economic crisis means that its work has never been more vital.

Given that so many people have been made redundant from the construction industry since the recession began, it might seem that attracting new recruits to construction is a less pressing priority than at any other point in the past 20 years. But Peasland is adamant that this attitude stores up problems for the future.

“In the current environment, if we don’t get the 16-25 year olds into employment now, the likelihood is they’re not going to experience a working environment. If you’re, say, 40-plus and unemployed, you can be re-employed and understand what work is. But it’s going to be very difficult to get them into a job at 25-plus if they haven’t experienced work.”

The Prince’s Trust exists to target disadvantaged young people, which means the benefits it can bring to the individuals themselves are striking (see case study). The fact that these young people are also often from outside construction’s traditional demographic means the trust also provides a route for the industry to vary its workforce.

“A lot of ethnic minorities tend to be disadvantaged,” says Peasland. “Within the figures we’ve released [last April to December], 23% of participants were from an ethnic minority, so it’s helpful in trying to make our industry a bit more diverse.”

The fact that the trust’s averages for recruiting young people from minority backgrounds is so high compared to the industry averages is, Peasland argues, not just down to its specialised target markets.

“I think there is a comfort factor - it’s more of a nurturing environment. It is much more daunting for a youngster to make that first call to a company, for instance, than it is to approach the trust. Especially when a lot are in positions where for one reason or another they may have lost their confidence. They need to have that restored, and that’s where the trust comes in.” 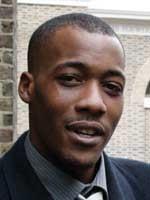 A former gang member from Newham, London, Warren Christian is now pursuing a career in construction. When he was 13, he was shot for being “in the wrong postcode”. He began carrying a knife, and saw gang members as role models. After one of his friends was killed, Warren became depressed. He could not see a future that did not involve crime.

He says: “I hit rock bottom. I realised that unless I changed my ways I was going to end up in jail - or in a coffin. It was a sobering realisation that I didn’t expect to see my 21st birthday.”

Warren heard about the Prince’s Trust Get into Construction course through a friend. He enrolled on a programme run by the Olympic Delivery Authority, and by the end of his course had impressed staff so much that he was taken on as an apprentice with Ballymore, where he did a construction diploma. Now 26, he is working for Balfour Beatty on the Olympics aquatics centre, and the company intends to support him through a construction management course which could lead to a degree.

Winning over the industry

The growing reputation the trust has within the industry is illustrated by the fact it has taken on nine new backers in the past year, bringing its total industry membership to 37 - a mixture of construction firms, support services companies, lawyers and suppliers.

Part of the reason for this support is that the scheme can demonstrate a high level of success from its participants. Some 73% of its recruits continued in education, training or employment between April and December 2009. The work placements that form part of the programme help ensure that students can cope with a live construction environment - an area frequently criticised in other courses - and it also gives employers the opportunity to vet potential recruits. “I think when companies see these youngsters at first hand they see the potential in them,” says Peasland.

Winning over the government

Despite the trust’s successes, Peasland is realistic about the continuing threat the economic climate poses to the initiative’s success. The most obvious impact is in the area of financing - public sector money currently provides a substantial part of the trust’s construction group’s £1m annual budget. “We’ll have to look for more private sector funding, but also sell ourselves more to the public sector so they can really see the benefit of what we’re doing.”

The trust is also adapting its programmes to the new economic reality. Peasland says he is looking at the possibility of reducing the cost of running courses to make the membership fees paid by industry “go as far as they can”. And although the programme covers the whole of the UK, “increasingly a major endeavour” is to run the programmes only where the industry believes there will be jobs for the next two to three years. “We don’t want to set people up to fail,” he says.