The top 10 most disastrous building projects in the world EVER

Budgets spiralling to the size of a small country’s GDP. Vast body counts. Overruns that go on for centuries … Yes, in the style of a Channel 4 filler show, and on the back of the nightmare that is the National Physical Laboratory, it’s the worst projects ever 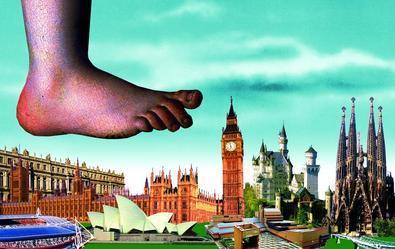 As the team that worked on the national Physical Laboratory knows, every construction project has the ability to turn round and eat its creators. The cost of supplies, weather delays or even the occasional contract dispute can bring disaster. But few, it is fair to say, can claim to have spent 122 years on site. Or to have sent their architect to an insane asylum. Or, for that matter, to have led to the deaths from fever of thousands of workers. Clearly, some projects belong in a class of their own. Building decided to trawl through construction’s annals to come up with the schemes that everyone involved regretted ever signing up to. Were they contemptible folly or triumph in the face of adversity? You decide. (Actually, we’ve decided and organised them into a top 10 for you … but feel free to disagree.)

New York skyscraper the Citicorp building was a pioneering design when it opened in 1977: its body raised up on nine-storey “piloti” located in the middle of each wall (and not the corners as you might expect). Unbeknown to engineer William LeMessurier, contractors substituted bolts for the welded bracing intended to transfer the building weight to the ground. When a student phoned LeMessurier, curious as to how the building would fare in high winds, the engineer ran further calculations and, learning of the substitution, realised the building was liable to sudden structural collapse. Working overnight with hurricanes predicted, the joints were reinforced and disaster averted. Not surprisingly, Citicorp and LeMessurier waited almost 20 years to tell their story …

Score: 6 on the headache scale

The architect who never came back

Today, Sydney Opera House is Australia’s best-loved landmark. Tourists throng to the tip of Bennelong Point to snap its dramatic roofs, which unfurl like the sails of the boats in the bay. However, this serene scene was once the setting for Australia’s most acrimonious building dispute. In 1966, architect Jørn Utzon resigned, furious at what he saw as the government’s interference with his design. Wrangles then broke out between the orchestra and opera companies regarding acoustics (what was good for one didn’t work for the other). Finally, it was discovered that concrete columns wouldn’t support the roof and they all had to be replaced. The building took 14 years to complete, at a cost of Aus$100m. Utzon never returned to Australia to see his masterpiece.

Score: 6 on the dispute scale
Score: 2 on the time scale

Planned for the 2004 Olympics – and still not ready

The Athens Olympics have come and gone and still there’s no sign of the museum intended as the games’ cultural centrepiece and the bait to secure the return to Greece of the Elgin Marbles. In 2001, following three fruitless contests, Bernard Tschumi won an international competition to design a museum at the base of the Acropolis. But legal challenges by residents and others, who claimed that work on the site would destroy ancient artefacts and structures not yet uncovered, halted construction of the $50m New Acropolis Museum. By the time Greece’s highest court threw out their suit, the 2004 deadline had been missed and costs had more than doubled. Officials insist the ill-fated building will be completed – one day.

Three years late, and looking for a new contractor

The much-plagued National Physical Laboratory in Teddington, west London, has been back in the headlines recently thanks to the DTI’s announcement that it is looking for a new contractor to take over the £300m PFI scheme – three years after it was due to be finished.

What was meant to be the flagship of British scientific endeavour has morphed into a Frankenstein-like monster of a project. Mind-bendingly complicated problems with the ultra-high-spec air-conditioning are understood to have resulted in an out-of-court settlement of more than £3m for M&E contractor NG Bailey. Laing is thought to have written off more than £75m. Oh, and it is still only 60% complete.

A rather delayed kick-off

The “will they, won’t they?” battle to complete Cardiff’s Millennium Stadium before the 1999 Rugby World Cup occupied much of the pre-tournament build-up, with rumours abounding that the kick-off for the opening match was at 5pm because the pitch was being laid at 3pm. Disputes with neighbouring landowner Cardiff Rugby Football Club about the demolition of a stand and the design of four masts raking out at 45° from the corners of the stadium led to redesigns, delays and soaring construction costs. These in turn led to a £26m loss for main contractor Laing Construction, which had agreed a £126m fixed-price contract and shortly thereafter was sold to Ray O’Rourke for £1. The Cardiff jinx has also spread to roofing contractor Kelsey Roofing Industries, which went into administration last month.

Score: 6 on the heacache scale
Score: 3 on the money scale

A very big book could be written on the vanity projects of the rich and dangerous, but the undoubted ruler of this sub-genre of disastrous projects is King Ludwig II of Bavaria, known to friends as Mad King Ludwig (although, in fairness, he was only declared legally insane three days before his death in 1886). A keen castlebuilder, Ludwig’s grand project was the fairytale Neuschwanstein Castle, into which he drained much of his private fortune. Envisioned less as a home, more as a stage for the operas of Ludwig’s hero Richard Wagner, the project began to unravel when, 14 years into the three-year programme, Wagner died, never having seen it, let alone staged an opera there. A year later, Ludwig decided to move in, staying for a grand total of 11 nights before finding the continuing building work not to his taste. Following Ludwig’s own death two years later, the work ground on for a further eight years. When the builders finally downed their tools in 1894, only a third of the rooms had been finished.

So the Sydney Opera House reckons it was late? Fourteen years is nothing. Colin St John Wilson describes building the British Library as his “30 years war”. His first scheme, back in the 1960s, for a site next to the British Museum, was scrapped when locals objected to its size. Undaunted, he drew up an elaborate new scheme in 1977 for a site next to St Pancras station. Mistakes, delays, constant changes to the design and technical difficulties plagued the project (memorably, miles of rolling shelves were found to stick together). By the time the library finally opened in 1997, it had cost more than £500m, three times the original estimate. Although users love it, many critics find it deeply ugly – Prince Charles famously likened it to an academy for secret policemen.

Sometimes it helps to be an absolute monarch. Had Louis XIV had to account for his behaviour or had his labour force had any form of representation, Versailles would never have been built. The project was madness: the vast palace was built on insalubrious swampland. Thousands of labourers died of fever and pneumonia while draining the bog and levelling the land even before construction could begin. But Louis, eager to distance himself from Paris and his courtiers, was adamant. Over 30 years, with the assistance of architect Louis le Vau and gardener Andre le Nôtre, he transformed the existing hunting lodge into Europe’s most spectacular palace.

Score: 19 on the death scale
Score: 5 on the time scale

A danger to architects’ health

Actors are told never to work with children or animals; architects, contractors and consultants are becoming increasingly aware that the same applies to parliaments. Of course, this was the case long before the Scottish parliament went a spectacular £400m over its £40m budget and was delivered 20 months late. When most of the Palace of Westminster was burned to the ground in 1834, it took 26 years and a budget that increased threefold to complete the ambitious gothic redesign. During this time, one of the scheme’s architects, Augustus Welby Pugin, ended up in Bedlam – the Bethlehem hospital for the care of the insane – and the other, Sir Charles Barry, died worn out by the worry of his massive undertaking.

Westminster extension building Portcullis House, which opened in 2001, completes a hat-trick of nightmarish parliamentary projects in the UK. Costs on the controversial building rose from £151m to a nice round £250m and on completion construction manager Laing found 7500 defects, including 200 loose door handles. The House of Commons ended up paying more than £13m in compensation and legal fees to contractors after mishandling the award of the cladding contract and delays to the project.

Many of Europe’s most splendid cathedrals have taken centuries to build. Barcelona’s Sagrada Familia is no exception. Antoni Gaudí sensibly began his magnum opus, the Expiatory Temple of the Sagrada Familia, early, at the tender age of 31. He was to devote the remaining 43 years of his life to the project. Even when he died in 1926, run over by a tram on his way to the site, little but the first facade was complete (and even then, only partially so). Construction work goes on to this day. In part, the problem was that Gaudí’s ambition outstripped anything achievable in his lifetime. In an era before computer modelling, Gaudí designed an impossibly liquid building, whose every piece required thousands of construction drawings. Although passionately committed to the project, his eccentric behaviour – for much of his life he dined solely on lettuce leaves dipped in milk – tended to alienate clients. He was also famed for his obstinacy – a characteristic most poignantly evident in his dogged belief that the slow-braking Barcelona trams should be forced to give way to pedestrians …

Building based its selection of “the top 10 most disastrous building projects” on time and budget overruns, associated deaths, arguments and general headaches caused. The list includes buildings only and excludes all civil engineering projects. And please bear in mind that the symbol ratings are relative and do not indicate actual numbers. Of course, this is not a definitive list, so if you have any nominations as to projects that should have made the list – perhaps from your own bitter experience – then please email us at building@building.co.uk