They have not been moved 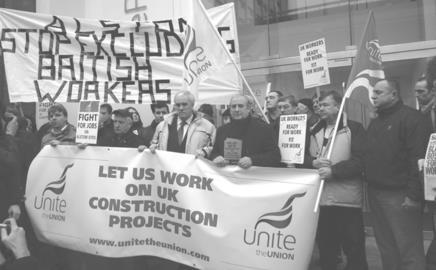 After twenty-five strikes in 16 days, has the government's intervention done enough to stop unrest from paralysing more UK sites?

Phil Willis is desperate for work. A steel erecter from Kent, he has been in the industry for more than 40 years but has been unemployed since September 2007. Three weeks ago, the 59-year-old applied to work on the construction of E.ON and Alstom’s £504m gas-fired combined heat and power station on the Isle of Grain, despite allegations that the project was not recruiting UK labour. He has heard nothing back. “There just aren’t any other jobs,” he says. “We feel we should have a slice of the work we have been doing for decades.”

Willis is one of the 60 unemployed labourers who gathered under the banner of the Unite union at Alstom’s London headquarters on 5 February following a week of strikes that stretched from Scotland to Plymouth, demanding that the French developer, its subcontractors Remak and ZRE, and other foreign firms in charge of similar scale projects, “stop excluding British workers” in favour of their established European supply chains.

The campaign appeared to secure an important victory last week when Gordon Brown endorsed “guiding principles” put forward by the Engineering Construction Industry Association (ECIA) that ask contractors to consider whether there are competent workers available locally (see box). But with nothing enshrined in law, will mere guidelines be enough to stop strikes spreading to more sites as the industry’s 70,000 jobless workers seek reassurance they are not being undercut by foreign counterparts?

Warning signs seem to be emerging already. As Building went to press on Wednesday, Unite was planning a protest outside the House of Commons, with joint general secretary Derek Simpson delivering a petition to 10 Downing Street. Further strikes were planned at the Isle of Grain and Staythorpe in Nottinghamshire, another power station site hit by the protests.

And with firms at the centre of the current dispute likely to be clients in the upcoming nuclear new-build programme, industry figures are saying the government should exert more pressure on them if some of the UK’s largest construction sites are not to face paralysis both now and in the future. “I don’t have much confidence in protests stopping,” says one strike organiser. “We’re some way from change.”

That the guidelines may not be taken seriously by firms is suggested by the fact that, despite the government’s fanfare over last week’s announcement, member firms were aware of them weeks before the strikes. Mike Hockey, managing director of the ECIA, says the guidelines were announced to the National Joint Council for the Engineering and Construction Industry in early January. “Firms knew they were coming, although the additional guidelines were only circulated last week,” he says.

However, he remains confident that the measures will make a difference: “Early indications are that they will be very well received. The guidelines will formalise what is already best practice among most of our members, and improve the minority that don’t perform at best practice levels.

But Neil Willoughby, the regional officer for Unite in Kent, the home of Alstom’s Isle of Grain power station, does not share this optimism. “If these guidelines were announced in early January, then Alstom has shown already that they will not be addressing them,” he says. “Over 200 people have applied for a job at the Isle of Grain site, but have still heard nothing back.”

An Alstom spokesperson said: “All of Alstom’s construction sites for power stations strictly adhere to … the recently updated guidelines from the ECIA.

“We have ensured that our non-UK subcontractors have committed to considering UK workers on an equal and fair basis, in the event that they require additional manpower.”

Yet Unite believes that if tougher measures are not put in place, the current crop of power stations and the forthcoming nuclear programme, which has attracted interest from continental energy giants such as EDF and Alstom, could end up excluding UK workers almost entirely.

The concern that unions have over the agreement, apart from its voluntary nature, is that the ECIA lacks the capacity to carry out sufficient checks on firms that want to become members. This means that some may not have as strong a background on worker conditions as membership of the organisation is meant to imply. One union source contends that at several of the sites the checks the ECIA said they would carry out turned out to be ineffective. “They need to bring in more meaningful checks, so we can ensure companies are bona fide.”

A further, if slightly ironic, problem is that lawyers are warning that employers who follow the guidelines too stringently could end up breaching the 1976 Race Relations Act. “If an employer says he is only going to employ people from the local area, and he uses this as his sole principle way of recruiting people, he runs the risk of excluding others on the grounds of race or nationality,” says Alex Lock, partner of the employment group at law firm Beachcroft.

So what else could be done, by industry or government, to convince workers that they are not being put at an unfair disadvantage?

Willis suggests that joint council meetings to discuss site issues should be held twice a month instead of once, as stated in the National Agreement for the Engineering Construction Industry. But ultimately, he fears the ECIA is still too weak: “We need actual government legislation if workers are to believe they’re being taken seriously.”

Another potential solution could be reform of the EU’s Posted Workers Directive, which protects workers from one EU country who are employed by a company to carry out work in another. The directive, currently under review after pressure from some states concerned with unemployment in their local workforce, dictates that posted workers are employed under the terms of the country in which they work, rather than local agreements. As a result, foreign labourers often work for the UK minimum wage, sometimes well below market rates, thereby undercutting their UK counterparts. Brown has pledged to consider the results of the review.

Back at the London demonstration, Willis, for one, says he will continue to campaign until he gets a job. He says the campaign is not about xenophobia, but about a “level playing field on wages and jobs”. “If something’s not done, it will continue to get worse,” he says. “We’ll lose our job skills and apprentices. It will erode the industry.”

What the guidelines say

On 4 February the ECIA issued Guiding Principles for companies to consider when using non-UK contractors and labour on engineering construction sites. The guide was developed “in response to an increasing number of contracts being won by non-UK contractors who wish to use non-UK workers here in the UK”.

It says: “Always consider whether there are competent workers available locally. If there are, it is good practice for the non-UK contractor to explore and consider the local skills availability and to consider any applications that may be forthcoming.”