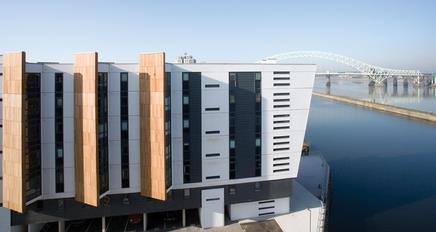 Timber frames from Prestoplan have been used in the construction of 10 six-storey apartment blocks for Bryant Homes on the banks of the River Mersey in Runcorn.

Prestoplan worked closely with the architect Calderpeel. Most of the buildings were made from timber-frame units on a concrete transfer deck but also included a triangular cowl at the front of each building that had to be created from wood. This was achieved by cantilevering galvanized steel beams out from the main structure at each floor level which preserved the visual appearance of the substantial wing walls while resisting significant wind loads on the exposed site.

The steel window frames have been supported directly on the timber shell with the cladding system detailed in such a way that the natural movement of the frame could be accommodated.