Up where the air is clear

Heneghan Peng’s new Department of Architecture and Landscape for the University of Greenwich will host 14 roof gardens, including ponds, teaching spaces, beehives and even a couple of vineyards 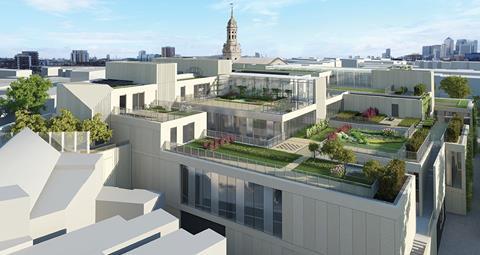 Roof gardens have always presented an alluring paradox. An enigmatic collusion between natural and built landscapes, they provide a highly simulated physical environment that nonetheless offers the beguiling promise of sanctuary and escape.

In relentlessly urbanised London they have long been popular. From the stunning ornamental roof gardens that adorned Selfridges department store until the Blitz to the temporary gardens created on the roof of John Lewis’ flagship Oxford Street store this summer, they have always offered hidden and tranquil repose from the bustle of city life.

Most of London’s roof gardens offer little more than visual and leisure amenity, but one is soon set to be completed in Greenwich that could provide a veritable compendium of unlikely ecological and biodiversity assets ranging from eco-fuel to biomass-produced hamburgers.

The University of Greenwich’s new Department of Architecture and Landscape is currently on site and the £76m building is scheduled to open next year. Its roof is surmounted by no less than 14 intricately landscaped gardens that its promoters ambitiously claim constitute the biggest biodiverse roof garden of its kind in Europe, and one that will be a landmark experimental learning resource for its students as well as academics from across the world. The university describes the 2,817m2 roof as an environmental laboratory.

A significant feature will be its harnessing of emerging algaeponics technology, the potentially groundbreaking process by which sunlight and carbon dioxide interact with methane emitted from algae to create zero-carbon fuel. The roof will be the first permanent algaeponics installation in the UK and one of only a handful across the world.

Designed by architect Heneghan Peng, the four-storey block is located on a former V2 rocket bombsite whose various stages of piecemeal redevelopment since the Second World War have seen it occupied by a range of uses, including a petrol station and a market.

The new building provides teaching, studio and library space for various creative arts departments, such as landscaping and architecture. Nestling on the edge of Greenwich town centre, it also sits within the Greenwich Maritime World Heritage Site and is therefore a part of a highly sensitive conservation area of international importance.

Part of the ambition with the project was to form a conceptual link between the two environmental landmarks on either side of it: the River Thames and the verdant expanses of Greenwich Park right next door. But arguably it is the building’s remarkable landscaped roof that makes the chief environmental contribution.

The roof gardens are principally arranged on three cascading levels, a consequence of the building’s massing that steps down to the residential gardens along its eastern facade.

An extraordinary range of landscaping treatments, ecological environments and teaching functions is maintained across 14 gardens. Those on the lowest levels tend to offer a mix of external teaching environments, ponds and water features, as well as various kinds of planting. Of the five lowest, the first incorporates a beehive with sedum-based planting and a water fountain, the second has soil where leeks, potatoes and other vegetables can be grown, and a third contains pond and wetland areas as well as, impressively, one of two of the rooftop’s vineyards.

Of the final two low-level gardens, one is a hard-landscaped outdoor classroom with daisy planters and another water feature while the other is a secluded and semi-enclosed “secret” garden which could be used for a variety of teaching or recreational functions.

There tends to be less access to the upper-level roofs, where varying substrates and three different PH levels make them ideal for more research-based studies. These gardens include the second vineyard, further hard landscaped teaching areas, a herb garden, a space containing a variety of multicoloured planters and additional food growing areas. There are also gardens growing sedum and grass, with a 200mm soil depth, that are dedicated exclusively to research.

Two greenhouses also provide controlled conditions for biodiversity studies, while photovoltaic panels and a weather station are located on the uppermost rooftop. As one would expect, spectacular panoramic views of Greenwich as well as the wider city are available from all the gardens, particularly those on the highest level.

Across all the gardens, soil depths vary from 80mm to 600mm with ponds and water features commonly ranging from 300 to 600mm. Clearly this places considerable additional loads on the building’s structure, particularly considering that early outline proposals merely saw a conventional green roof laid with grass and that the building has a very deep floorplate.

Rooftop loads are accommodated by the building’s concrete frame structure with slabs, beams and columns capable of supporting the gardens but still permitting generous spans of up to 12m in the accommodation below.

A sophisticated drainage strategy keeps rainwater run-off to zero. The roof is surrounded by a gravel edge perimeter that absorbs any run-off but most rainwater is retained in the soil beds. A proprietary waffle-like rainwater tray sits underneath paviors and this is responsible for collecting and attenuating rainwater in hard landscaped areas.

However, from a research and innovation point of view, the chief attraction of the roof is probably the algaeponics unit. The university envisages using the green biomass created here for groundbreaking research purposes. The algae fuel that can be extracted from this biomass is carbon free, yet 1,000 tonnes of it can be produced by using the same amount of energy that is required to create one gallon of concentrated conventional oil. The university plans to research the prospect of using algae fuel to create the world’s first fossil-fuel-free petrol station in California. And closer to home, it is also investigating its use as a fuel to power boats on the Thames.