Once dismissed as a concrete jungle, few cities have changed more dramatically than Birmingham, says Dave Rogers, who reports on the schemes that are making it not just an address but a destination 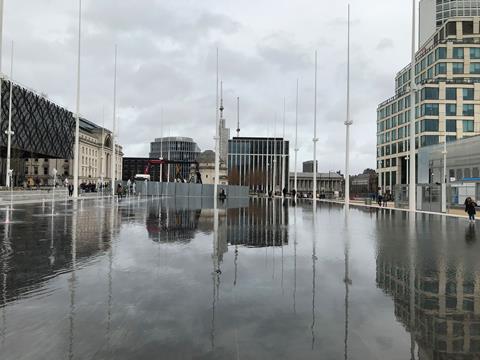 “It’s a secret only one million people are in on.”

Writer and editor Tom Cullen left London to return to the place of his birth seven years ago. The 39-year-old spent a dozen years working in the capital’s magazine industry, including spells at men’s lifestyle magazines such as FHM and Shortlist. The father-of-two now runs I Choose Birmingham, a magazine that’s emailed once a week to 17,000 subscribers.

It’s a listings magazine detailing what is going on in the city. Even a few years ago, Cullen says, it would have been unthinkable that such a thing existed in Birmingham. “It’s a joy to live in now,” he adds. “It certainly wasn’t the case back then.”

“Back then” and Birmingham go hand in hand for many. Edwin Bray, a partner in charge of real estate at Deloitte’s Birmingham office, acknowledges the city was regarded as a concrete jungle, criss-crossed by busy roads: “A lot of people would never have said they lived in Birmingham. They may have had the mickey taken out of them.”

The obvious question, then, is what has changed? Building spoke to people before the coronavirus outbreak had really taken over everybody’s daily lives. Andy Street, the region’s metropolitan mayor, says the West Midlands will get through the crisis – but the next few weeks and months remain much of an unknown.

When the region does re-emerge, the development of HS2 will be one of the key factors in its growth story. “HS2 has undoubtedly been a huge catalyst for developers,” Mark Holbeche, the director of development at Midlands property group Regal, says. 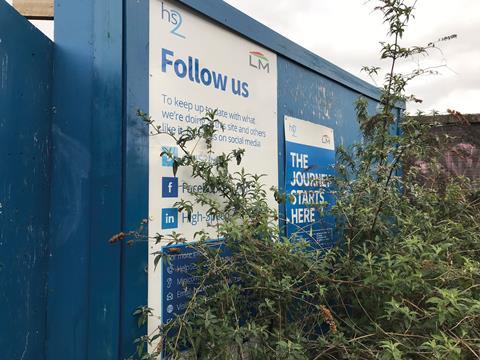 The firm is behind the Bank, a twin tower residential scheme off the city’s Broad Street, completed this year and named after a nearby former bank built in the 1830s and since used as a restaurant and takeaway and most recently as a community suggestion box by the builder.

Holbeche adds: “Birmingham is already an incredibly well-connected city but HS2 will be a real game-changer in connecting the city to London and the North. This has seen developers looking to seize on the affordability of the West Midlands, with Birmingham being one of the most popular locations for those looking to move out of the capital. Investors are increasingly looking to the city for opportunities.”

The need to know

Broad Street is one such place earmarked for a huge makeover. Locals roll their eyes when the street gets mentioned, and it’s easy to see why. At one end is the Walkabout bar, made famous a few years ago when Australian cricketer David Warner punched future England captain Joe Root in the early hours of a Sunday morning, while at the other, in the shadow of the Five Ways shopping centre, is Pryzm with its 50% off drinks before 11pm promotions and giant ball pit.

“The busiest club in Birmingham,” a doorman says, proudly, clocking on for work at half past two on a Saturday afternoon. But the street’s reputation as a trashy, hen party-strewn, drink-all-you-like-for-a-quid strip is set to be changed by a string of towers.

The street is being dug up to accommodate the West Midlands Metro extension, and halfway down it Sisk is on site with a 42-storey PRS scheme for Moda Living which has been drawn up by local practice Glenn Howells.

City living was non-existent when I started here

At the Five Ways end, a 61-storey scheme designed by another local practice, Glancy Nicholls, is scheduled to replace a low-rise office built by Lovell 30 years ago and will see a Job Centre next door torn down as part of the work. The same practice is also behind a super-thin tower next door to the Moda scheme, a 37-storey apart-hotel building just 9.5m wide.

Dav Bansal is a partner at Glenn Howells, based in Digbeth, and has been at the firm for 21 years. “City living was non-existent when I started here,” he says. “You drove in, worked and drove out.” 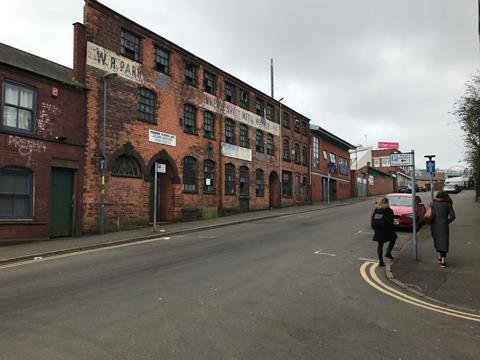 Digbeth is in line for a makeover

He says the city is experiencing a surge in the number of people wanting to live in its centre. This is being driven by younger people and Bansal says the build-to-rent market is helping propel demand. Argent, the developer feted for its work at King’s Cross in London, has been turning its hand to the middle of Birmingham, overhauling the centre with the Paradise Circus development which necessitated the controversial demolition of the city’s John Madin-designed 1970s library – a brutalist icon.

Argent wants to get in on the build-to-rent act and has instructed Glenn Howells to draw up plans for a scheme at the development. It is expected to be somewhere in the region of 40 storeys when plans are unveiled later this year. 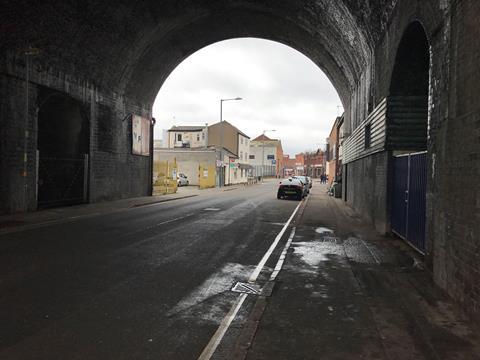 “Towers”, says Peter Murray, the founder of New London Architecture, the group that comes up with an annual tall buildings survey for London, “generally illustrate a progressive and growth-orientated city and a planning system adaptable enough to cater for the demands of the 21st century.”

It’s as busy as I can remember it

Murray, then, would surely approve of what’s going on in Birmingham. It’s not just Broad Street that will see new towers: further into the centre Bam is working on a 26-storey scheme at 103 Colmore Row while up and over the hill is the Snowhill development, which recently saw BT announce that it would move 4,000 staff into Three Snowhill, also completed by Bam.

A native of the Isle of Wight, Dave Ellis is Bam’s regional director and moved up to Birmingham in 1979. “It’s as busy as I can remember it,” he says. Explaining the glut of towers being planned and built, he adds: “If you look around, the number of available sites is decreasing. If you don’t have the footprint, the only way to go is up. Birmingham is doing well – it’s a young, vibrant city. People want to be here.” 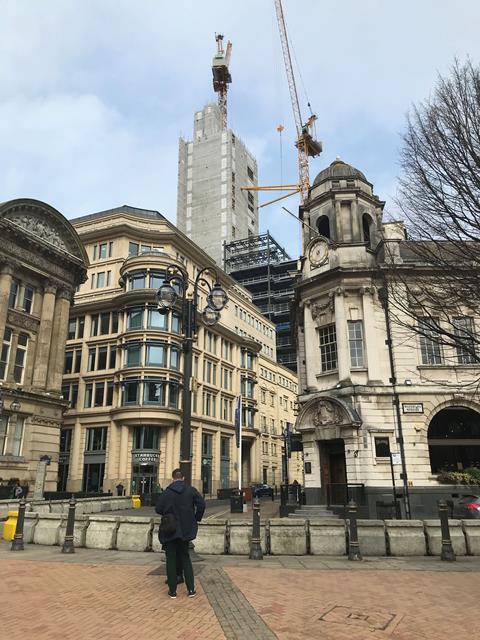 The decision by BT will see more than five times the number of employees at the telecoms giant work in the city than currently do so. It will take most of the building’s 17 floors and Graeme Paton, its managing director of property and facilities services, says Birmingham’s burgeoning reputation was a key factor in its decision. “The city was recently ranked one of the most rapidly improving places to work in Britain,” he says. “We will become one of the largest employers in Birmingham with a visible presence in a strategic and important location.”

BT’s decision follows that of other major employers including HMRC, which is creating a regional hub at 3 Arena Central, while HSBC has already moved into a new headquarters building next door at 2 Arena Central.

Deloitte’s Bray thinks the BT deal is a big one. “It’s a very significant letting. The office was developed speculatively by Ballymore and there was a big question mark. Would it be let?

“We are really catching up with other cities. There are high-quality jobs, people want to live closer to work, there is a huge amount of effort to retain graduates and a lot of people are relocating from London.”

He says the improvement of the city’s main railway station, New Street, has been emblematic of the sorts of changes happening. A previously unloved station – it was once voted the second-biggest eyesore in the UK by the readers of Country Life; it was pipped by wind farms – has been transformed by Mace under a design drawn up by Foreign Office Architects.

“New Street has turned from being a big lump into suddenly this destination,” says Glen Howells’ Bansal. A John Lewis – the region’s metropolitan mayor, Andy Street, is a former managing director of the retail chain – anchors the whole development. Bansal adds: “People spend time there [New Street]. You can walk through the station to get to other parts of the city without catching a train.”

The demand for towers is also being driven by the number of young people living in the city, says Glancy Nicholls director Adam McPartland. “There is a bit of a vertical rush in the city. Young people want to be in the hustle and bustle of the city.”

Gareth Bradford is the director of housing and regeneration at the West Midlands Combined Authority, the group chaired by West Midlands mayor Street. He says: “Birmingham has promoted brownfield development. There is huge investment in transport, particularly the metro network, and that is making development sites in the urban area for high-density sites much more viable.

“The demand is from the student population, young professionals. This region is one of the youngest in Europe. A third of the population is under 25 years old.” 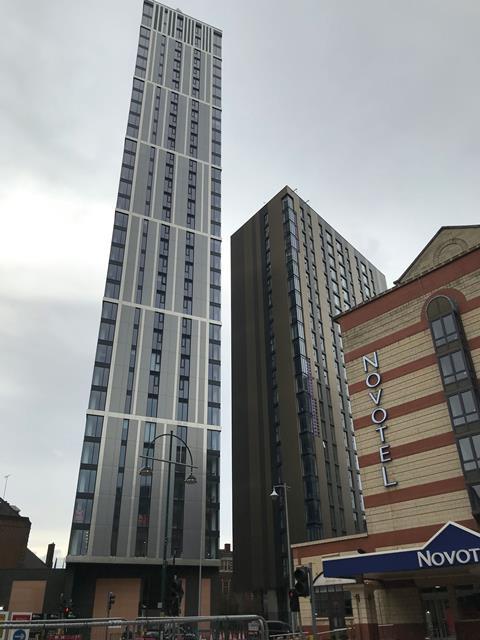 That all these young people want affordable living in the city is all well and good, but Glenn Howells’ Bansal warns against a Wild West approach. “There need to be strong and robust criteria to justify tall buildings,” he says. “There is a risk you could put them up on every corner.”

Regional cities are now grappling with the issues posed by tall towers that were faced by London 20 years ago, says Alinea partner Steve Watts, who is also chair of the Council on Tall Buildings and Urban Habitat.

Towers can provide answers to the country’s housing shortages, he says, and adds: “Regional cities in the UK have also benefited from international investment, as foreign funds look to diversify not only across international borders but across national ones too. Various real estate projects have their attention, from large, mixed-use developments supported by infrastructure investment to tall trophy assets.

There has been an aligning of stars around Brexit, the election, HS2

“This is why cities such as Manchester and Birmingham have been having the sort of debates that London endured around the turn of the century, about the appropriateness of high-rise – discussions which have progressed in London to the appropriateness of tall residential buildings, and how they will – or will not – provide the answer to our housing crisis.”

Regal Property’s Bank development, which consists of one 21-storey tower and a larger 33-storey tower, was built by Wates, and John Carlin is the firm’s regional managing director. He has been in the area for 18 years and says Birmingham has benefited from a chain reaction of events recently. “There has been an aligning of stars around Brexit, the election, HS2 – which is a massive game-changer – the Commonwealth Games, BT and HSBC moving into the city.

“Before, there wasn’t a critical mass of things to move things forward. It was very much project-based.”

Undoubtedly the city’s optimism has been blunted by the coronavirus outbreak. How much that will impact on development is the great unknown.

Still, it would be good to end on a positive. I Choose Birmingham founder Tom Cullen has a view of the Brummie can-do spirit. “If we want to build it, we will build it. People may say it’s not the most beautiful city but it’s a really good city. Everyone works together hand in hand.” A mantra the entire country will need to heed in the coming months.