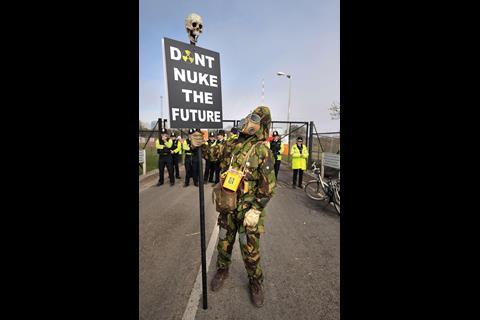 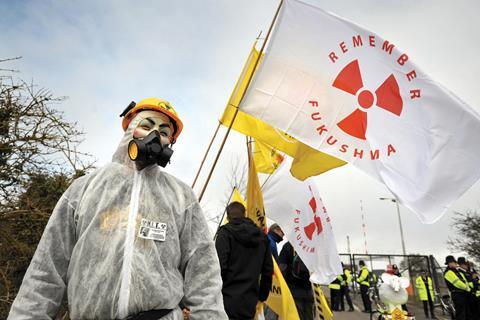 Hinkley Point C will be the first nuclear power plant to be built in decades and of course construction firms are keen to be part of the £10bn project. But wait: EDF still has to make a final investment decision, the plant hasn’t even got planning permission yet, and then there’s the little matter of nuclear protesters and what they might tie themselves to. Vern Pitt reports

The winding country lanes that criss-cross the lush green landscape of West Somerset could not be more different from the congested streets of East London but the two locations have one thing in common - massive construction projects. As the Olympic construction work winds down, the industry has turned its eyes to Hinkley Point C, the first nuclear power plant to be built for decades and the UK’s biggest single project since the Olympics.

Power company EDF has a budget of £10bn for the 10-year programme to build two European Pressurised Reactor (EPR) plants, which will sit next to Hinkley Point A, now being decommissioned, and Hinkley Point B, which was granted a five-year extension to its working life in 2007. It is mid-way through procuring the first of them, with the prize £2.5bn civils job down to the final two bidders.

Despite the negative publicity, the UK is not alone in pursuing nuclear power. However, the Fukushima disaster that followed the Japanese tsunami has turned many nations against building these plants, with Germany even shutting down existing provision.

And while new nuclear power in the UK has political backing from both the coalition government and the Labour opposition, with 267 MPs voting the nuclear national policy statement through to only 14 voting against, it is still hugely controversial with the wider public. So much so that a bundle of judicial reviews threatens to bring progress to a halt. It’s worth remembering the first proposed European Preassurised Reactor plant is still to receive planning permission.

Notwithstanding those challenges, Hinkley Point C will be by far the largest nuclear power plant in the UK. But building it in such a remote location, in the teeth of huge local concern over the impact the construction is likely to have on the area, presents the industry with a huge challenges. So how on earth will it be done?

EDF estimates it will need 6,500 people at the peak of its construction, around 2016. It has told the local council it expects only 1,600 local people to be employed, which means the rest will need places to stay. David Eccles, head of EDF’s Bridgwater office, says: “I can’t tell you the number of people that have said to me ‘I have a back bedroom and I could happily accommodate someone.”

Many of those that don’t manage to find such welcoming lodgings will be directed to nearly 1,500 campus beds being built both onsite and in nearby Bridgwater. “The impact of 6,000 people working on site and 22,000-23,000 working off site to support them is going to have quite an impact on the local area,” says Duncan McGinty, leader of Sedgemoor council. “It’s almost doubling the local population.”

He says there is a public relations risk to contractors bringing in so many employees to a relatively small community, so managing the increase in population with community leaders will be key. 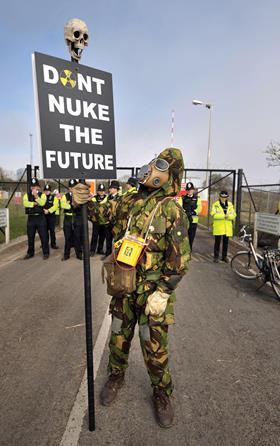 Perhaps more challenging still are the logistics of the project. Single lane country roads will provide the only means of getting to the site by truck or car. Plus, all traffic coming off the M5 must pass through the centre of Bridgwater, a typical English market town, before heading to the coast. It is estimated that the country lane leading to the site will take one truck load every 20 seconds at the height of the construction programme. Alistair Smith, head of nuclear at contractor Costain, says: “It’s the number one way to annoy the local community.”
Sedgemoor council, based in Bridgwater, is opposed to the transport plans, which include hubs at the M5 junctions where loads will be batched up and dispatched to the site during the middle of the day to avoid the rush hours, and modifications to a number of junctions on the route.

McGinty says they are “wholly inadequate” given the transport system is due to reach capacity by 2016 even without the power station. He would have liked to have seen a bypass built around the town but this did not form part of EDF’s 55,000-page submission to the Infrastructure Planning Committee (IPC), the national body which will decide by the end of the year whether EDF gets permission to build the plant. But he accepts that this would now represent a delay of around three years and isn’t feasible. He is urging EDF to look at its transport plans again.

The lack of a bypass is why for EDF it is imperative that it gets permission to build a temporary jetty on the site for bringing in aggregates and other materials. The Marine Management Organisation (MMO) is due to rule on whether this will be allowed within the next couple of months. The plans have also been included in EDF’s submission to the IPC, which could approve them even if the MMO rules against.

Even using this method to bring in materials has its problems. “The biggest challenge of bringing things in by sea is the 13 metre rise and fall of the tide. It’s ok with aggregates because you have a big elephant trunk which goes up and down with it but when you are trying to lift steel or metal objects off [a ship] it’s a bit more difficult,” says Nigel Cann, EDF’s construction director for Hinkley. He says contractors with experience in bringing in goods by sea will be valuable to the project.

It’s not just the jetty that has a number of permissions outstanding. While the IPC will rule on the ability to build the whole station the EPR design still has 31 outstanding issues flagged up by the nuclear regulator to be worked out.

The outstanding number of permissions is a source of confidence for protesters against the plant. Stop Hinkley, the long-running local anti-nuclear group, has already occupied a farm on the site to stop initial earthworks being carried out before permission for the complete plant is given. Although anti-nuclear sentiment in the area is not strong at the moment, the group feels it is growing as people realise the scale of the disruption that a construction project the size of the Olympics will bring.

In December a petition with over 13,000 signatures against the project was delivered to Downing Street. Cecily Collingridge, protester with the group, says: “What has come as a surprise is most of those [signatures] were garnered locally in Somerset […] Across the board there are a lot of people who are pissed off […] The occupation of Langborough farm had local support.”

So will they be chaining themselves to diggers? Collingridge is not ruling anything in or out at this stage. “That’s down to individual choice,” she says. “There isn’t a Stop Hinkley position, it all depends on how things unfold.” EDF’s Cann says that contractors will not be held responsible if the timetable slips because of protests.

However anyone wanting to take direct action would face their own logistical challenges because the site is dotted with cameras on 10-ft blue mounts, a tall security fence is being hastily constructed and it is guarded by a security team comprising mostly of ex-Gurkas from security firm G4S.

Even without delays caused by any protest action, things can fall behind. EDF’s plants in Flamanville in France and Olkiluoto in Finland are years over time and budget, though the company says the lessons have now been learned. In Flamanville, for example, the quality of the concrete and welding was an issue.

Avoiding such issues will require a skilled workforce, which is the reason EDF is investing £1.5m in Bridgwater College to train and upskill construction staff. “You can’t train a carpenter in six months but you can upskill a carpenter to be a form carpenter [a highly skilled role key to building the frames in which to cast the concrete the project needs]. Then you back
fill the less skilled positions behind them,” says Cann.

Smith adds that it’s a worthwhile investment: “You are building up a capability to offer work on a lot of the five [plants currently planned in the UK]. You have got to look at this as a series of projects.”

Cann becomes animated when he thinks about how far beyond the Somerset coast this project could take UK construction. “It’s not just for Hinkley. If we get this right, there’s Sizewell [EDF’s second planned EPR site in Suffolk] and beyond that. If we can do it well in the UK, it’s an exportable model,” he says. “A lot of people’s cynicism is around economics rather than the technology [we can address that].”

So is the British man in charge of a French power company’s largest project in the UK patriotic about the possibilities for UK plc? “Absolutely,” says Cann. It sounds like the Olympic spirit has made it to Somerset.

EDF is not due to make a final investment decision on the Hinkley Point C plant until the end of the year but it has already let some big contracts.

Kier/Bam have already started work on the £100m earthworks job to prepare the foundations at the site and big contracts such as the £2.5bn civil engineering job and the £250m of marine works are both down to shortlist.

Nigel Cann, Hinkley construction director, says he expects to let a couple of hundred tier one contracts. He says he intends to use a rewards system similar to that pioneered on projects such as Heathrow Terminal Two, which will allow contractors that run under budget to take a percentage of the savings.

EDF will also not hold a percentage of contractors’ fees as a retention, a practice that is frequently blamed for poor cash flow in the sector.
Cann has ambitions to use BIM on the project, though he doubts it can be rolled out to its full potential in part because of the need on a nuclear project to maintain high regulatory standards which makes full integration impossible.

Up to 200 tier one contracts

6,500 workers at the height of construction