Wish you were here? How to get into construction in Australia

Australia’s residential boom may have come to an end but the country offers a strong infrastructure pipeline and a host of opportunities in the commercial, retirement and education sectors. Which probably explains the growing number of UK players heading over there 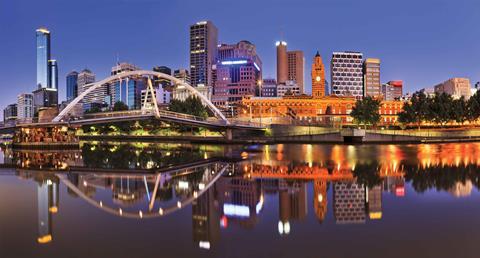 Sitting in the boardroom of a 14th-floor office in the heart of Melbourne, it’s easy to understand why UK firms are interested in the city, and elsewhere in Australia. The sun is out, there are cranes in the air – in the first quarter of this year, the number of cranes in Melbourne passed 200 for the first time ever in Rider Levett Bucknall’s survey. “It’s a really great city isn’t it?” says Alinea’s Iain Parker. “There’s just so much going on.”

Parker – who is in town to talk strategy and collaboration with Slattery, a Melbourne-based quantity surveyor with which Alinea signed a memorandum of understanding last year – is clearly enthused by the prospect of the work on offer: “It’s a really exciting city and a really exciting opportunity for us.”

His counterpart from Slattery, Barry Laycock, a director at the firm, agrees there are plenty of reasons the Australian market is attracting UK players. “There’s lots of opportunities here. There’s a growing population [and] we are seeing a good investment in infrastructure.”

There are already some familiar faces from contracting that have made the trip, with Lendlease and Multiplex both among the biggest players in the Australian market. And consultants, too: for example, Mace has been acting as a project and programme manager in Australia for the past decade. And many more may be tempted to follow in their footsteps.

The pull factors of the Australian construction market, which is responsible for 9% of the country’s GDP, are even more enticing to UK firms right now given the political and economic uncertainty back home. Just last week there was confirmation of further falls in UK commercial and civil engineering activity in March from the IHS Markit/CIPS Construction survey. The research showed continued Brexit concerns are putting off investors, and although housebuilding showed some growth it is no longer enough to offset an overall weakening construction sector. Commentators are saying this now looks less like a blip and more like a sustained softening of the UK market, hence the need for businesses to look for work further afield. So, is Australia just such a land of opportunity?

Clearly Alinea thinks the country’s A$150bn (£81bn) construction industry is just that, but other construction firms thinking of making the trip may want to look carefully at how different sections of the market are faring, as well as get some tips on how to get their foot in the door.

Slattery’s Laycock is measured about the work on offer, saying recent real estate booms in Melbourne and Sydney in particular have been a draw over the past two decades for international companies and investors. Though these booms have proven Australia is a good market in which to operate, they have now petered out, and UK firms may now need to look elsewhere for areas of growth.

“It’s pretty clear now that there has been a big drop in residential projects, which is the major factor in the decline in construction output,” says Jeremy Oakes, managing director of Mace Australia. “Residential property prices have reduced significantly and continue to do so.” The decline to which Oakes was a 3.1% drop in construction output in the three months to December 2018, according to the most recent quarter-on-quarter figures from Trading Economics.

Laycock agrees the market has been hit by a slowdown in the residential sector, saying that in Melbourne specifically a change to planning regulations known as the C270 amendment – introduced in November 2016 to provide adequate separation between tall buildings and protect landmarks and public space – had further “strangled development in the central business district a bit” in terms of residential, as well as to a lesser degree in commercial.

But while the general residential market may have slowed down, one specific segment of that market is thriving. Australia’s ageing population has led to a boom time for developers in the aged care and retirement living space. Sam Snaddon, general manager of real estate at Japara, a company that operates in this area, says contractors that had previously worked on traditional residential jobs have made a change. “Many tier-one and -two builders are pivoting and moving into the aged care space looking for work because work in residential is drying up,” says Snaddon.

He also points to the negative effect on the market of political uncertainty – albeit significantly less so than the tumultuous environment created by Brexit – on the residential sector in Australia, where a federal election is expected to take place in May. “There is no doubt that the pending election and likely new Labor government has impacted property development,” Snaddon says.

One reason is anticipation of a very different policy direction of a new administration. The Labor party, headed by Bill Shorten, is proposing to change tax policy in a way likely to further impact the residential apartment market and by extension the construction market, says Snaddon. It proposes to halve the capital gains discount for assets such as property and limit negative gearing to new properties, which is likely to put off property investors. 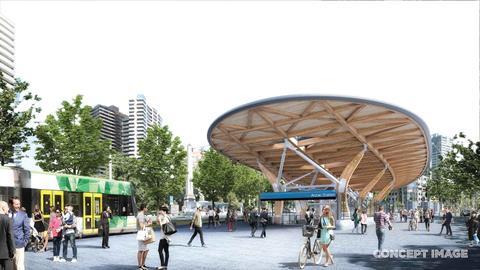 However, in the land of seemingly eternal sunshine there is very much still a bright side. The residential sector may have taken a tumble, but Slattery’s Laycock and Japara’s Snaddon point to strong pipelines in the commercial and infrastructure sectors, which they say mean there is still plenty of work for construction firms looking to enter or work in the Australian market.

The “solid infrastructure spending” Snaddon describes is what many construction firms are banking on to fill the gap left by the dip in residential work. “Thankfully, the infrastructure market strength will help backfill the residential project falls,” says Mace’s Oakes. “Contractors and developers working exclusively in the residential market would very much be feeling the effects of the downturn.” But, he says, companies operating in a more diverse portfolio of sectors, such as infrastructure, will “likely be remaining upbeat” as there is still a very strong pipeline of work. And it’s also a market that new entrants from the UK are looking at keenly.

According to Belinda Coates, another director at Slattery, that infrastructure work is only going to grow over the next few years. “There is at least A$40bn (£22bn) to be spent in the next five years across Melbourne, Brisbane and Sydney,” she says. “There is a new focus on good design in Australia that is attracting international firms to work on these projects.” These large-scale infrastructure projects are already providing plenty of work for construction firms from the UK. The A$11bn (£6bn) Melbourne Metro scheme – a second underground train route through the central business district and the creation of five underground stations – has a host of British firms working on it. A joint venture comprising Rogers  Stirk Harbour + Partners, Weston Williamson and Australian-based practice Hassell is designing the five stations, while a joint venture that includes Keller also won a £113m contract to do subterranean construction work on the scheme. Sydney is carrying out its own metro project, the biggest infrastructure project in Australia, worth between A$11.5bn (£6.2bn) and A$12.5bn (£6.8bn), while a new rail scheme in Brisbane is expected to be worth around A$944m (£511m).

Visas should not be too big of an issue for UK workers as there are business and innovation visas on offer for those looking to establish or run a company.

In terms of bringing employees across, the Temporary Skill Shortage or 482 visa runs for a standard two years, which can be extended to four. It costs less than £1,000 and is mostly determined within a month. Many site, white-collar and engineering jobs within the construction sector are on the skills shortage list.

Higher education is another growth sector, says Slattery’s Laycock: “The higher education institutions have really been investing in their estates.” His firm has been working on Melbourne university’s new Melbourne Conservatorium of Music. Mace’s Oakes says his firm has also benefited: “We are seeing significant capital investment across many of the major universities in New South Wales and Victoria, responding to where the population growth areas are,” he says.

UK firms have been working in this sector for a number of years. Laing O’Rourke has carried out jobs for both the University of Queensland and Griffith University, while Grimshaw Architects designed the Peter Doherty Institute for Infection and Immunity for Melbourne University and the University of New South Wales’ Hilmer Building.

Alinea’s Parker and Slattery’s Laycock both point to the strong commercial sector as an area of opportunity due to “a growth in white-collar employment” in cities. Laycock sees the number of large upcoming commercial developments in Melbourne as a sign the sector will maintain its strength. “There is still lots of good commercial work to come on stream. Just near here [listed real estate investment funds] Charter Hall and Dexus have acquired two [large office buildings] so there’s no doubt that sector is still performing.”

According to the Australian Constructors  Association’s latest six-monthly outlook, the commercial sector is expected to grow at a solid rate of 8.7% in the 2018/19 financial year, which ends 30 June, and expand by 6.3% the next year.

So despite a slowdown in residential and a degree of political uncertainty, says Alinea’s Parker, a strong infrastructure pipeline, continued international investment and a growth in the commercial sector make the Australian market an exciting proposition. “We want to work on unique schemes,” he says. “And there looks like there is going to be a good opportunity for that here.” 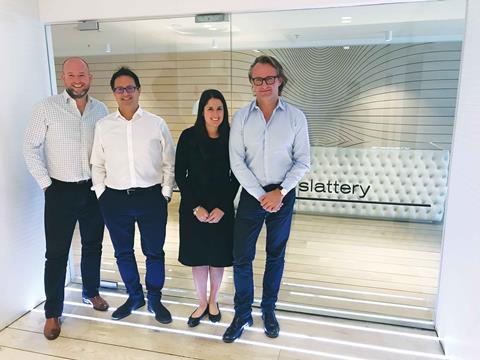 From London to Melbourne

Alinea and Slattery, a Melbourne-based quantity surveyor, are about to enter the second year of a partnership that will see the two firms join forces to win work in Melbourne, Sydney, London and beyond. “We are both solely focused on cost advice,” says Alinea partner Iain Parker. “There are many opportunities that exist as we see existing clients for each of us developing in London and Melbourne and Sydney. So we will team up to take those clients into one another’s territory and deliver as a JV arrangement.” The partnership has brought Parker and Alinea associate Angela Joseph to Melbourne for a quick recce to learn more about Slattery and map out the next three years of the partnership. It is a trip that is likely to be mirrored this summer, with Slattery set to send a senior leader and associate to London for a return trip to learn about Alinea.

Slattery, which was founded in the mid-1970s as a family business, employs around 100 people across Australia. “We are predominantly a cost consulting business specialising in early advice,” says Slattery director Barry Laycock. “That’s pretty much all we do, very similar to the Alinea model.” While Alinea is known as a tall tower expert in London, Slattery works across a range of sectors, something Laycock says is due to the size of the market place. “Education is a big part of our business, and commercial – and what we call arts, civic and culture is another significant sector.” Slattery has also worked heavily in the residential sector and is involved in transport and healthcare.