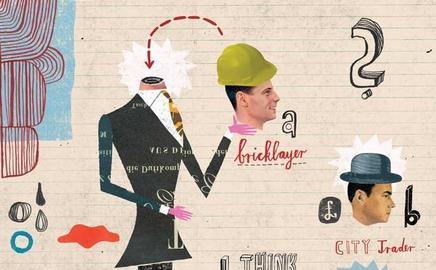 From city trader to housing consultant (by way of bricklaying)

Nicholas Fowler
In 1988, Nicholas Fowler was working for Chase Manhattan in the capital markets, earning a salary of £40,000 plus bonuses and a company car. Then …

… One day, 20 of us were called to a meeting and told we were redundant. I felt relieved. I was making lots of money, but I wasn’t doing anything useful. I felt I was missing out on real life.

I decided to retrain as a bricklayer. I’d wanted to be an architect at school, before I got interested in economics, and I had worked on building sites during holidays from school and university, so I knew I liked the environment.

I soon wondered if I had made the right decision. I was attending a useless bricklaying course under a cold, damp railway arch in east London. There was no electricity, the generator kept breaking down and the workshop got broken into and our tools stolen.

But I persevered and became a bricklayer – briefly. After five weeks of bricklaying I realised I couldn’t do that for the rest of my life and managed to get a job with John Lelliot as a trainee, working my way up to development manager in the property division.

Then I lost my job again. And this time it was a bit more scary. In 1994, Lelliot lost a lot of money on one project and went bust. It was sad that such a strong company could go under because of one bad project.

I intended to go into consultancy after that, but I was offered a job with United Housing and thought it would be madness not to take it. After a couple of years I moved to Sanctuary Housing Association for three years and then to my current role as business improvement manager at Denne Construction.

And I’ve been able to do other things alongside my main role there: I’ve been seconded to Constructing Excellence, I lecture and have my own small consultancy. I’ve been involved in training – we’ve just set up the first National Skills Academy for Construction for housing. I suppose my experiences as a trainee in economics help.

I'm really pleased I got out of the City. What I do now is all about being optimistic, energetic and interested in people.

I think everyone should go through at least three changes in their lives. Professional people need to draw on their resources: all their training, experience and networks. If necessary, switch careers. Your training should allow you to cope with change.

The man who turned change into a business

At Wates, we won various awards, I did a lot of speaking at conferences and events and made some contacts. In 2001, towards the end of the programme my team of 15 people who had been seconded from the business went back into operational roles. And that left me: job done, with limited options.

Being made redundant left me shocked and my pride dented. I retreated into my shell for maybe a week. I worried about paying the mortgage.

I am quite an introvert, but I got on the phone to everybody I knew and created a business for myself doing what I had done at Birse and Wates for the wider industry. There was a lot of change happening and I had experience of that – as well as having worked at the sharp end on just about every sort of project.

So now I run two businesses. DSA Building Performance works with individuals, teams and organisations to help them handle change that’s going on. And in 2007 I launched Leaders Connect, which is a service for people in leadership positions who need advice, coaching or someone to discuss ideas with. I learned from the senior people I’ve worked with over the past few years that it’s lonely at the top. I assembled a panel of people who are retired, semi-retired or have portfolio careers who act as mentors to senior managers.

With hindsight, being made redundant from Wates was the best thing that could have happened.

The architect who crossed the great divide – and became a contractor

John Eynon
John Eynon was made redundant twice in 1991, first from Forum Architects, when it closed its London office, and then from William McKay Lewis. After briefly setting up a practice with a friend, he found himself working for Wandsworth council …

That was the lowest point in my working life, chasing up charges owed on council-owned properties. It had nothing to do with architecture and I was conscious that every day I was there, I was further and further from getting back into practice. I remember thinking: “Am I ever going to get out of here?”

But that was all put into perspective a couple of years later. My wife had two bouts of cancer and I dropped her off at the hospital not knowing if I would be a single parent with three young kids at the end of the day. Those sorts of moments come into your life and they align your perspective.

I did get out of there, after six months, into RIBA’s information services business and after two years there, someone I had worked with approached me to see if I wanted to go to Tarmac Building as a design manager. Design managers were a new idea back then and Tarmac was leading the way. For an architect, it’s definitely crossing a line to go and work for a contractor. But I had worked on site and knew I enjoyed that side of the business, but also knew that after years out and no CAD skills I would find it hard to get back into practice.

I’ve never regretted that decision because now I see so much more of the building process. At Wates, I’m proposals manager working with the pre-construction team – it’s creative and it’s challenging. And I work with some great people on some great projects.

My advice to anyone who finds themselves out of a job is: don’t give up, just keep looking. Make the most of the hand that you have been dealt. However hard it seems, there are always opportunities, even if they’re things you would never normally consider.

Original print headline - In a break from our usual programming …

Owen Morgan, head of commercial operations at
redundancy consultant Penna, explains what to do next: