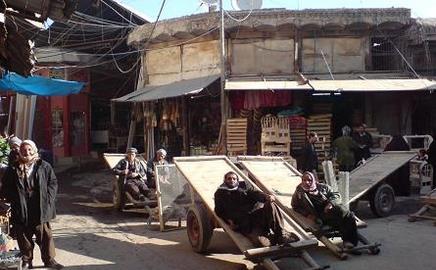 Northern Iraq, or the autonomous region known as Kurdistan, is experiencing a construction boom with various Gulf companies investing heavily in the region in a bid to capitalise on reconstruction.

Last week, Dubai-based Damac Properties unveiled a $4.5bn (£2.8bn) property development outside the region's capital city of Erbil. Damac followed another UAE company, Bunyan Real Estate, which recently signed a $2bn (£1.2bn) deal on a construction project in the region's town of Sulimaniya. And two other Gulf companies, Crescent Petroleum and Dana, are involved in a million-dollar energy project to help to modernise the region.

Credit: James Gordon
Citadel of Hewlêr, Iraqi Kurdistan
Many more companies are expected to join them, according to Falah Mustafa Bakir, the Kurdistan regional government's head of foreign relations, who says that the region has been working hard to gain credibility in the international arena.

It's our policy to open up our borders to attract investors… there are a lot of opportunities available, especially in infrastructure, real estate and construction

“There are more deals in the pipeline. It's our policy to open up our borders to attract investors from the Gulf, Europe - we believe there are a lot of opportunities available, especially in infrastructure, real estate and construction,” he says.

Kurdistan is seen as more stable than the rest of Iraq, where political and security problems are expected to continue for years. The region's potential is mostly undiscovered, suggests Bakir, and the regional government is planning to open an Erbil Business Centre in Dubai this year to attract lucrative Gulf petrodollars.

The region bills itself as “the other Iraq” and has been keen to sell itself as a place where international companies can set up as a base from which to operate elsewhere in the country. Says Bakir: “Capital Erbil in particular is well suited serving the business community - it is safe as we have our own security forces that can offer protection. We have not had any terrorist attacks in the last couple of years. Many international airlines fly to Erbil and it's modernised in many ways.”

Credit: James Gordon
Town below Hewlêr(Erbil)Citadel
But challenges remain. Years of uncertainty and lack of investment have badly damaged the country's infrastructure - even in the sleek and modern business areas of Erbil, power cuts are a daily problem and the sewage system as well as communication networks are ineffective. “All of Iraq is suffering from lack of decent infrastructure, but hopefully by next year this will be sorted with the help of foreign investors,” says Bakir.

Local observers fear that the boom in Kurdistan will benefit only the lucky few. Poverty in the rural areas and lack of banking facilities or a well-developed mortgage system make it almost impossible for locals to capitalise on the boom, according to Iraqi journalist Mohammad Ahmed.

We have our own security forces that can offer protection. We have not had any terrorist attacks in the last couple of years

With the modern new developments financially out of the reach of most local people, many fear this could cause resentment. Ahmed adds: “There are people who have criticised this type of development, as ignoring the local realities can only drive a further wedge between locals and those - often wealthy foreign investors - hoping to make money.”