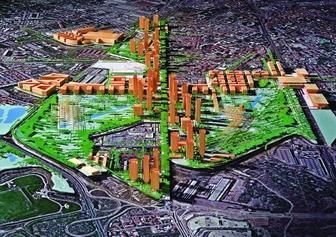 He says the real issue for the built environment sector is how we design cities and transport and energy infrastructures.

“The strategy of putting the emphasis on buildings is heading in the right direction,” he says. “But if the government takes those regulations too far it runs the risk of alienating designers. They could simply become too difficult, and individual building design can only go so far.”

Rather than being simply a matter of what you build, it’s where you build and what you put around it that makes for a sustainable city, Kitson explains. Where are the parks? Where can people practise their religion or study? Are there jobs in the local area? These questions are just as important as district heating and cooling or transport systems.

To help to put the pieces together, Hilson Moran has developed a masterplanning system called SuBET (Sustainable Built Environment Tool), which provides a design framework. It brings together everyone involved in a project, from the client and the quantity surveyor to the architect and environmental consultant, to consider 71 environmental, economic and socio-cultural indicators.

The tool is eight years in the making, stemming from research by teams under Dr Husam Al Waer, now lecturer in sustainable architecture and director of the sustainability assessment research group at the University of Dundee, and Professor Derek Clements-Croome, director of the intelligent buildings research group at the University of Reading. The research was partly financed by the EPSRC.

Kitson says: “Everyone has been focused on environmental stewardship but we need to think more about economic and social factors – job creation, public 32 MASTERPLANNING BSD NOVEMBER 2009 / ISSUE 10 spaces. That’s the thinking behind the tool. It’s encouraging more of a mix of uses in masterplans.

“We have to move away from those masterplans in the Middle East, ones that have 25 towers, all residential and nothing else. That’s not sustainable.”

Historic cities have a surprising amount to teach us, Kitson says. “If you look at the make-up of the masterplan of London, how that’s built up over the years, it’s one of the most sustainable cities in the world. It has cultural and social hubs. There are green spaces. Look at these on a sunny summer day and you’ll see how important they are.

“Contrast this with somewhere such as Mexico City, which has grown over the years but seen things tagged on. There’s very little public transport and the average wait time in cars is two-and-a-half hours. The people sit and eat fast-food in their cars, and the city has the highest obesity in the world. Consequently, it has the highest diabetes levels in the world.

“That’s planning gone wrong, and why masterplanning is so important. We don’t want that problem replicated around the world,” Kitson says.

Everyone has been focused on environmental stewardship but we need to think more about economic and social factors – job creation, public spaces

A important part of creating a sustainable masterplan is making the bigpicture decisions at the earliest stage of the design process. SuBET sits the entire project team down together, armed with plot details and local information.

The tool breaks the masterplan into three central areas – environment, economic and socio-cultural – which are then divided into subgroups such as land and ecology.

Ideal targets are set and detailed notes are made. The notes are input into the SuBET tool, which gives a graphical readout of how sustainable the project is. This framework can be adapted and revisited as the masterplan is designed.

The initial, intense discussions will determine which areas are given most weight. Kitson is confident that the tool can offer a “guiding hand” to all of the team, reminding them of what is important at each stage of the design.

SuBET was used to assess the 1.5m m2 Sesto San Giovanni industrial regeneration area in Milan. “The economic argument was strong,” says Kitson, “but the environmental expert pointed out the respiratory problems in Milan because of the pollution.

“The tool turns the process on its head and asks what is the most important thing for the area? Getting the team into one room and spending a day or two going through the details like this is the best way to do it. It’s very area-specific. ”

While SuBET is only available at the moment as a consultancy service from Hilson Moran, Kitson is keen that it should be a means to encourage debate.

“This isn’t ‘Hilson Moran will save the world’,” he laughs. “We invested time and resources into this tool not just because the company needed it, but because we feel the industry needs it. Hopefully others will adopt this philosophy or develop their own.

“It wouldn’t be a sustainable thing to do, to develop a tool only to sell it on. An important question for the industry is who will solve this problem? How are we going to cut the carbon habit?

“This is not a Hilson Moran issue, or an engineering issue. Most of the architectural practices know sustainable masterplanning is coming, and are doing something on this. It will be a huge issue in the next five or six years.”

Where does this shift in emphasis from individual buildings to overarching masterplans leave engineers and architects? Should they worry about their jobs?

“It may be that you’ll see the emergence of a hybrid of disciplines – the archiengineer,” Kitson says. “Whether that will be an engineer working in an architectural practice or vice-versa, I don’t know. Architects have the skills but they need advice from engineers. Perhaps this will mean changes in university courses, too. A sustainable masterplan could even become the main driver behind anything getting planning. What everyone needs to realise is that change is coming.”